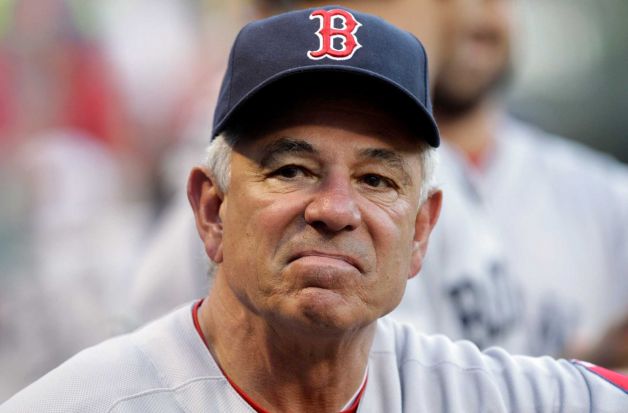 During his weekly interview today on WEEI's The Big Show out of Boston, Red Sox manager Bobby Valentine went absolutely crazy. If you want to listen to the full audio, WEEI has it up on their website, and I've also embedded it below. Some of the highlights, courtesy of WEEI's recap…

When asked about the 2012 Red Sox season…

"This is what I chose to do. I think it's been miserable, but it's also been part of my life's journey," said Valentine. "You learn from misery."

Has Valentine checked out this season?

"What an embarrassing thing to say. If I were there right now, I'd punch you right in the mouth. Ha, ha. How's that sound? Is that like I checked out? What an embarrassing thing," said Valentine. "Why would somebody even, that's stuff that a comic strip person would write. If someone's here, watching me go out at 2 o'clock in the afternoon, watching me put in the right relief pitchers to get a win, putting on a hit-and-run when it was necessary, talking to the guys after the game in the food room — how could someone in real life say that?"

Why did Valentine show up for a 7:10 PM Saturday game less than three hours before gametime?

"I shouldn't have to explain that. That pisses me off. Whoever wrote that knew what happened. They knew that my son was coming to see me for the first time in this lousy season and that I got to see him on the road, and that his flight was late, and that I was waiting at the airport in San Francisco for his flight to come in, and that I sent the lineup in and reported to my coaches that I was going to be a little late," said Valentine. "For someone to say that I was late is an absolute disgrace to their integrity if they have any. "When you said what you said, you should apologize to me for saying that I came late," he added. "I wasn't late. When you call in and say that you're delayed in traffic coming from the San Francisco Airport to the stupid Oakland Coliseum and that there's a traffic jam, then you're not late, no." Valentine added that characterizations that he was late to the ballpark were the product of "incompetent" reports and that his arrival time should not have raised eyebrows. "Four o'clock, like that's so late for a 7:15 game. Joe Maddon gets there everyday at 4 o'clock, just for the record," said Valentine.

Fox Sports also as a video of the pertinent parts of Valentine's rant.

Now, let's go ahead and recap what happened here.

-Valentine called his 2012 season miserable.
-Despite that, he'd still like to manage the team in 2013.
-He threatened to punch one of the hosts in the mouth for questioning whether or not he had checked out on the season. And instead of answering the question with a definitive statement, he questioned the validity of the question and responded with questions of his own.
-He set a lineup without being at the stadium, and considers calling in to say you're stuck in traffic a valid excuse for not being late. Then, he trashed the reporting that he was late to the stadium.

When I wrote earlier today that Valentine was on the hot seat…I didn't expect him to get fired this week. That could definitely be a possibility after this interview. Something like this is a potential career-killer. Threatening radio hosts, bashing reporters, admitting your year has been miserable…lord. Valentine won't be managing the Red Sox in 2013, thats for sure.