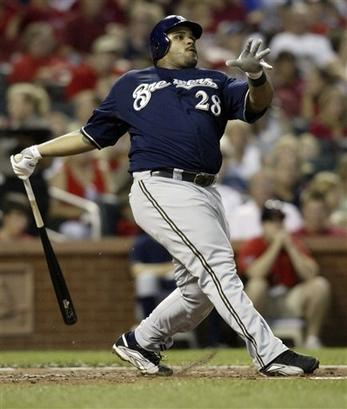 A note to everyone, and understand I mean this in the nicest possible way.

Chill the eff out on these rumors about Prince Fielder signing with the Nationals. Seriously. Take a deep breath. Break out the old paper bag if you have to.

Again, Prince Fielder is not a member of the Washington Nationals. Okay? Good? Now breathe.

I already covered this fairly extensively over on my personal blog but feel as though it needs to be addressed given the collective coronary that appears to be happening on social media. So to recap….just because you read something on Twitter does not mean it is the truth. And as Joe said seconds ago…

@JoeCNCJoe LuciaNote to all: just because someone has MLB in their username or a MLB logo as their avatar, DOES NOT MEAN THEY ARE INSIDE SOURCES.

The tweets in question come from a fellow named Scott Swaim, who runs an account called @mlbinsidenews. Haven’t heard of him? Neither had I until I had to do a Twitter search to find out where these rumors originated from. He claims to have broken the Beltran, Cuddyer and Pujols signings among others. This means he’s either the best MLB reporter on the planet and has connections that guys like Buster Olney, Richard Deitsch and Jon Heyman don’t, or he’s inflating claims of his own skills. Swaim also claims that the Tigers are on the verge of signing Bobby Abreu as well, though there seems to be no mention oof that anywhere else.

@MLBInsideNewsScott SwaimSource from #Nationals front office: DONE deal on Fielder. He has to fly from his home in FLA to WASH for Physical1 hour ago via web  Favorite  Retweet  Reply

A Google news search of the past month finds no mention of Swaim and Pujols anywhere except Bleacher Report. His reporting on Twitter has already been discredited by at least one major news outlet. Marc Topkin, the Tampa Bay Rays reporter for the St. Petersburg Times, asked Rays star Evan Longoria about a report that originated from Swaim’s Twitter account suggesting that Longoria would welcome a trade from the Rays. Here’s Longoria’s response to said inquiry:

“I don’t have any idea where that rumor came from! It’s completely false,” Longoria told the Times via text. “I’ve said from the start I love Tampa, I love the direction we are heading as a franchise and there is no better place for me to continue to grow as a player and person.”

Now, on the off chance that Swaim is in fact right about Prince Fielder signing with the Nationals, it wouldn’t be the first time an unknown has broken a major deal. Last year, Jim Breen, who runs a Milwaukee Brewers blog on the Milwaukee Journal-Sentinel’s website, was first with the Zack Greinke trade to the Brewers. He too faced a lot of the same ridicule that Swaim is now facing himself. But there’s a huge difference here — Breen was affiliated with a media outlet. He had a trail on the internet that went beyond a few tweets and mentions on Bleacher Report. Swaim has no apparent affiliation with a major news outlet or even so much as a blog. He’s got a Twitter account with a bio claiming he’s got “multiple connections within MLB.” That’s it. As Joe so eloquently stated earlier, anyone with an internet connection and a computer can claim to be an “insider.” That doesn’t mean it’s true.

Swaim also has a bit of a track record of being wrong, as illuminated by the brilliant Rany Jazayerli. In addition to the Longoria thing, MLBInsideNews also reported that a Matt Garza deal to the Tigers was imminent two weeks ago. Matt Garza, for the record, remains a member of the Cubs.

Meanwhile…Jim Bowden, a guy who, as a former GM and current ESPN personality, is about as much of an “MLB insider” as there ever was, has already stepped forward to diffuse the Twitter rumor mill.

@JimBowdenESPNxmJIM BOWDENAccording to multiple sources the Nationals and Prince Fielder are working towards a deal but DO NOT have a deal at this time…. stay tuned

At 8:45 on Saturday night, we all thought Joe Paterno was dead based on a series of tweets from a Penn State student blog. Paterno’s family was forced to issue a statement saying in essence that JoePa’s still alive, he’s not doing well, but he’s not dead yet. Near as I can tell, the Nationals aren’t at that point with Fielder yet, though having actually worked for a MLB team and written for MLB.com (does that make me an “insider” too?), I can assure you that a signing as significant as this one would have prominent real estate on the Nationals’ and MLB’s official websites within an hour of the ink drying.

My point — and I swear to God I have one here — is that he glory of being first has superceded the need to be accurate in today’s world. Prince Fielder may well eventually become a Washington National, but it hasn’t happened yet. Just because you read something on the internet doesn’t necessarily mean it’s true.