Today, CBS released a new feature to go hand in hand with fantasy baseball season called, of all things, “Baseball Boyfriend“. The jist of the feature is that each day, you pick a player from your team to accrue stats that go into a “boyfriend” category, and you compete against the other players’ “boyfriends” throughout the season. That sentence just felt bizarre to type.

I know CBS is just trying to cash in on the fantasy sports craze that’s sweeping the country, but couldn’t they have picked a better name than BASEBALL BOYFRIEND? The concept itself is actually pretty interesting (though I don’t know anyone who actually uses CBS for fantasy sports), but the execution was terrible.

Furthermore, take a look at CBS’s site explaining the feature. It’s made to look like a 12 year-old girl’s diary, which isn’t really the preferred design for a fantasy sports website. There’s even a section called “Dating History” that looks at your past “boyfriends” (god, that is still really awkward to type). Look at this sample image from the site. 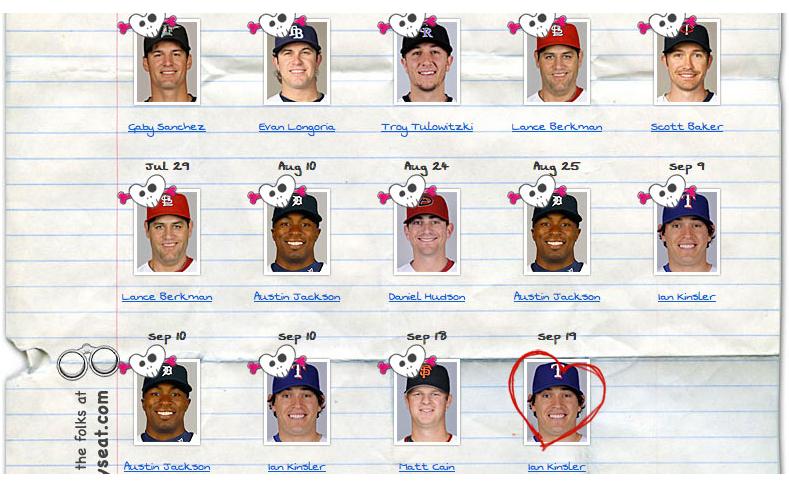 Those are indeed hearts and skulls by the players’ headshots. As of 3:52 PM EST, Baseball Boyfriend is the number eight trending topic on Twitter in the US. Check out some of these tweets from people across the country.

There are also numerous typos, on the site, including “hang on to you hunk”, and the new stat categories “tripples“. So in addition to a crappy concept, they have a crappy proofreader. The phrasing on the site is bizarre too, talking about “hunks”, “little black books”, “hotties”, and so on and so forth, like some sort of sick joke that should make you ashamed of playing the game.

The feature was created by A View From My Seat, and the company owner’s is claiming on Twitter that the game was created by his wife for her and her friends. So that’s enough of an idea to take to CBS and roll out nationwide to a country that is mainly predominated by male fantasy baseball players? Poor form all-around on this one. I wouldn’t be surprised to see the feature disappear in the coming days, and roll back out next week as the exact same concept, but with a very different name.

UPDATE: here is an interview I conducted with the creators of Baseball Boyfriend.