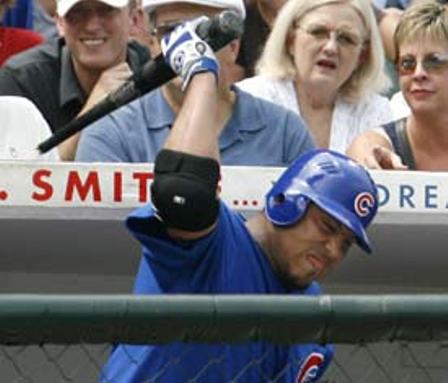 The bizarre saga of Carlos Zambrano has come to a close on the North Side of Chicago, as the Cubs dealt their one-time ace and long-time mental case to the Miami Marlins for 25-year-old starter Chris Volstad. In addition, the Cubs will pay $15.5 million of salary relief for Zambrano this season, the final year of a five year, $91.5 million contract extension that was signed back in 2008. It should be noted that Zambrano had to drop his no-trade clause to make this deal happen, and on top of that, the deal still needs to be approved by the Commissioner’s Office and is still pending physicals on both sides.

For the Cubs, they get rid of Zambrano, whose 2011 antics placed him on the rarely used Major League Baseball Disqualified List and basically made him a non-returner to the clubhouse. With Theo Epstein assuming the reigns, many were hoping that Zambrano would be someone Epstein would deal with right away, and after meeting with Zambrano early after the 2011 season, Epstein decided to deal the mercurial (to say the least) 30-year-old who had blown both hot and cold over his time with the Cubs. The decision was made by Chicago that Zambrano could be traded basically if they took on the majority of his contract, which meant that the amount of talent they could ask for in return would only be worth the amount of money the team they would trade him to would be willing to invest in Zambrano. Also, the Cubs would likely need a starter in return for Zambrano, limiting their options even further and hoping a team would take a chance on him during the last year of his contract.

It shouldn’t be understated enough that Zambrano basically pulled the trigger here. Naturally, there weren’t teams chomping at the bit to get Zambrano after his crazy antics in the past two years, but Miami decided that with someone like Ozzie Guillen at the helm, it would be a worthwhile gamble given the friendship between the two Venezuelans. With Guillen reportedly making nice with Hanley Ramirez after Ramirez blew up about the Jose Reyes signing, this is a signing that shows faith in Guillen’s leadership skills yet again.

So the deal was made, but what would Miami give up in return? Enter Volstad, a 6’8″ right-hander entering his first year of arbitration. Volstad has been a league-average pitcher in his three years of service, compiling a 4.52 FIP and a 50.4% ground ball rate over his career so far. In 2011, he pitched to a 4.32 FIP and an even better adjusted mark at 3.64, with a 52.3% GB rate. His strikeout rate dropped a point (18.3% to 17.5%) but he also dropped his walk rate as well (12.7% to 11.3%) over the past two years. Many point to him improving his ground ball rate last year, but it was mainly because he had such a drop from his 2008-2010 rates (53.4%, 49.5% and 47.9% in order). The main reason Volstad was given up in this deal was that the Cubs wanted a controllable pitcher in return for someone taking a chance on Zambrano. Even though Volstad is basically a league-average pitcher, he offers three years of team control and won’t cost much at all, as he’s being projected in the $2.5-$3 million range this year for his first year of arbitration. He also has a lot more room to improve at age 25, whereas Zambrano is basically a finished product at 30 and an overpriced one, at that.

That offers a much prettier picture than another year of Zambrano in Chicago, and Cubs fans must be rejoicing at the fact that the basket case is no more in Wrigleyville. As for the Marlins, if Zambrano can return to even a fraction of his old self in 2012, he fortifies a rotation that already includes good arms in Josh Johnson, Mark Buerhle, Ricky Nolasco and Anibal Sanchez. With all the major signings by Miami this offseason, there’s a chance that Zambrano could flourish due to him not being the center of attention, but it’s still somewhat slim given his history. The Marlins are taking a gamble here, but it’s one that has a lot of things going for it, and if it pays off, it turns into yet another good addition by the Artists Formerly Known as the Florida Marlins.