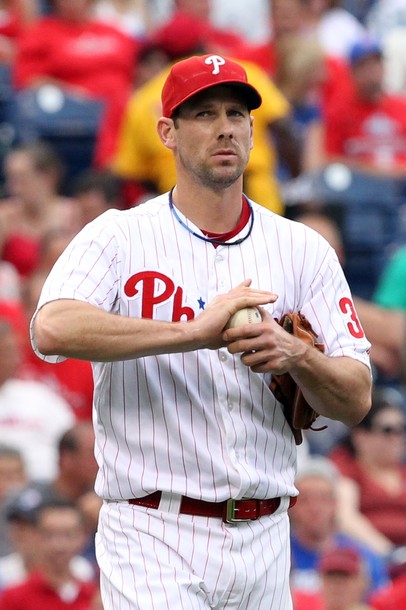 Last week, the Boston Red Sox shocked the galaxy when they dumped over a quarter of a billion dollars in long-term contracts on the Los Angeles Dodgers.  It was a brash, ballsy and unprecedented move by Boston, but it was also one that could quickly allow the disappointing franchise to reboot in a big hurry.  The thing is, it almost wasn't unprecedented because the Phillies had a shot at pulling off this financial coup first.

It was only a few days into August when the Dodgers claimed Phillies pitcher Cliff Lee on trade waivers in hopes that they could work out a deal for the frontline pitcher by taking that big commitment of $87.5 million the Phillies owed Lee after the season.  However, those trade talks never went anywhere, probably because the Phillies never thought they could find someone who would've been a huge enough sucker to take on all their other bad contracts.

In fact, the Phillies had almost the exact kind of package the Dodgers would've gone for.  Lee would've been the Adrian Gonzalez of the deal as the guy still performing at, or close to, peak levels, the guy that made the whole gamble worthwhile.  Lee wouldn't have been the big middle of the order bat, but he is a huge upgrade over Beckett and would've given the Dodgers a scary one-two punch in a potential playoff rotation with Clayton Kershaw.

The real incentive for the Phillies though would've been the nearly impossible task of finding a taker for Ryan Howard and his albatross of a contract.  That makes Howard the Carl Crawford of the deal even though those two have almost nothing in common other than their ugly long-term deals.  With only a .780 OPS for the Phillies this season as he works his way back into form after suffering a major Achilles injury, Howard is hardly an attractive commodity and that is before factoring in the $105 million he is owed from 2013 on.  He'll probably never replicate what Adrian Gonzalez is giving the Dodgers now but he is still an upgrade over James Loney and legitimate power threat to slot into the middle of the Dodgers order with hopes that he will improve as he gets healthier.  He does have one distinct advantage over Crawford, who is out 6-9 months, in that he is actually healthy and available to play now as the Dodgers quest to earn a post-season berth.

The last piece in the puzzle would've been shortstop Jimmy Rollins who is owed $22 million in 2013 and 2014, which is similar but cheaper to the salary slot Josh Beckett filled.  But what Rollins brings to the table is that he solves two different needs for the Dodgers.  First and foremost, he fills the gap at shortstop, with Hanley Ramirez moving back to third base.  But he also profiles as a leadoff solution for the Dodgers, which they have to be hoping that Crawford will solve once he gets healthy.  Rollins is on the downside of his career and not the on-base threat he once was, but given how many ABs Don Mattingly burned on Dee Gordon in the leadoff slot, it wouldn't be the worst decision he ever made.  At worst, Rollins would be a major improvement to the Dodgers infield defense.

Whether or not you are convinced the Phillies package of talent is superior, the real attraction for the Dodgers would have been that it would have saved the Dodgers somewhere in the neighborhood of $35 million in long-term commitments.  Even with the Dodgers throwing around cash like Pacman Jones in a strip club, that's a savings that even they have to appreciate.  Heck, it might even have left them freed up enough money to have GM Ned Colletti take on another waiver trade or just plain still have a little bit of a bankroll to use in free agency after the season.

Alas, none of it was meant to be.  Maybe the Phillies and Dodgers never thought outside of the box enough to even begin formulating such a salary dump.  Maybe the Phillies never had any interest in hitting the reset button on their roster.  Maybe they are more interested in collecting a bigger package of prospects this off-season by dealing Lee by himself.  Or maybe they will regret letting this opportunity slip through their fingers for years to come.