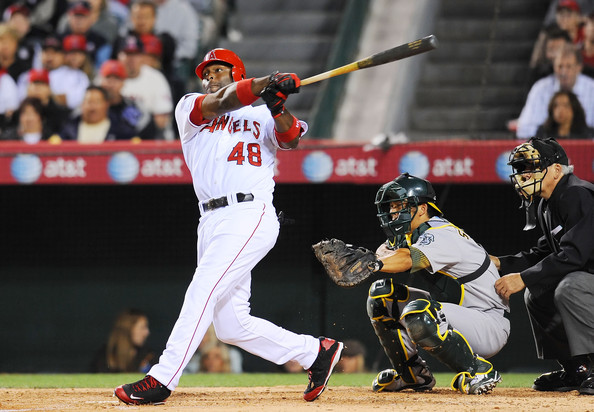 We've heard over and over again that his free agent class is one of the weakest in years.  If you need actual proof of that, look no further than the fact that a 37-year old corner outfielder coming off a 16-homer season is the hottest commodity on the free agent market.

Yes, that's right, Torii Hunter has become the most sought after hitter in baseball this off-season.  With no less than eight teams, almost all major contenders,  (Tigers, Yankees, Red Sox, Rangers, Phillies, Braves, Dodgers and Angels) showing some level of interest in the veteran, it seems that all the bigger, younger, more expensive names like Josh Hamilton, B.J. Upton, Michael Bourn and Nick Swisher will all have to patiently wait until the senior statesman of free agent outfielders picks his new home before teams start getting serious with them.

It seems that in the budget-conscious times, teams have developed a preference for Hunter who is asking only for a two-year contract in the neighborhood of $10 million per year.  Compared to the other top outfielders on the market, that contract length and average annual value is proving to be too good to pass up, even if there is some legitimate questions about how productive Hunter really can be over the life of that contract.  Coming off a season where he posted an .817 OPS but also a ridiculously unsustainable .389 BABIP, it seems almost inevitable that Hunter's numbers will dip in 2013 and beyond.

That doesn't seem to be scaring teams off though.  What teams seem to be more interested in are all the perceived intangibles that Hunter brings to the table.  Oh, sure, it helps that he's a decent hitter that can be slotted into several spots in the order and that he is a strong defensive corner outfielder, but the main attraction of Hunter is his leadership and personality.  Statistically, Torii is just a guy who is a solid short-term option in right field, but factor in his career-long reputation for being a great clubhouse guy and many of these contenders are looking at him as "the missing piece" that pushes them into the World Series, which is an interesting stance to take given that Hunter has, you know, never been to the World Series in his six trips to the playoffs (not that he's to blame for that, but you see what I'm getting at).

On one hand, it seems that Hunter is on the verge of getting overpaid because of his impossible to quantify contributions to clubhouse chemistry, which sets him up to be a major bust if he his age catches up with him, which is seemed to be doing in 2011, and he falters on the field.  On the other hand, that same non-measurable leadership could also mitigate a lot of that same criticism.  Hunter could completely tank in the batter's box, but if teammates and coaches pepper the media with quotes about what a great influence he has been and his new team wins a lot, then his contract will be seen as totally worth it.

How it all really plays out for Hunter remains to be seen, but one thing is for sure, when he makes his decision in the next two weeks (which he recently promised) one team will be glad to overpay him and most of the rest of the league will be upset that they didn't get to do so.