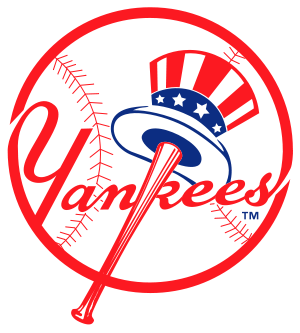 While the weather gods may have granted the Yankees a day's reprieve, there is little doubt that the end is nigh for the Bronx Bombers.  Even if they manage to avoid a sweep, they are going down in a giant ball of flames that was lit using the pages of Joe Girardi's binder.

For most teams, losing in the ALCS wouldn't be considered a failure, but standards are different in New York.  The listless fashion in which they've flamed out only serves to make manners worse.  Star players are getting benched left and right and the ones that aren't continue to not produce.  There is almost no move that Joe Girardi makes, or doesn't make, that isn't immediately scrutinized into the ground.  In short, chaos reigns supreme.

The question now becomes how will Brian Cashman and the Steinbrenner family restore order to their empire?

They've got a roster full of expensive, aging players that the manager clearly doesn't trust.  Despite all the massive contracts they have, their best player in the playoffs has been a 40-year old part-time DH.

It is only fitting that with all the hard choices that Girardi has filling out the lineup card that the Yankees will have just as many hard choices determining who to bring back considering how many impending free agents they have on their roster.  The only regulars under contract for 2013 are CC Sabathia, Mark Teixeira, Alex Rodriguez, Derek Jeter, Robinson Cano (assuming his team option is exercised), Curtis Granderson (who also has a team option), Phil Hughes, Ivan Nova, Boone Logan and David Robertson.  That's half a lineup, half a rotation and a fraction of a bullpen and no guarantee that all of those players are guys the Yanks actually want to keep around (I'm talking to you, A-Rod).

What looms on the horizon is the Yankees picking and choosing which of their own free agents to pursue out of Ichiro, Swisher, Martin, Kuroda, Rafael Soriano, Mariano Rivera and Pettitte.  Allof them (save the injured RIvera) performed well during the regular season but many of them were key contributors in their LCS embarrassment.  How many of those players should they really bring back?

As much as the brand name recognition of many of those players might appeal to the Yankees, perhaps they'd be better off reloading the team with fresh, young faces who can give the roster a new energy and a new attitude.  Even though they still possess three of the fabled Core Four, it is time to move on and build a new core.

For all their spending power, the Yankees have largely built their roster by acquiring safe, reliable veteran players.  If they really want to get back to being a dynasty, what they should consider is stepping outside of their comfort zone and making a bold move for younger, higher upside players.  Perhaps they could roll the dice on a potential franchise cornerstone like Justin Upton.  Maybe they take another run at prying Felix Hernandez out of the Mariner's iron grip.  They could even try and raid the free agent market for the likes of Michael Bourn, B.J. Upton, Mike Napoli, Zack Greinke, Anibal Sanchez or even Josh Hamilton.  If they need to let free agents walk or trade well-liked but over-the-hill former stars, then so be it.

None of those options necessarily guarantee that the Yankees will improve but the potential to find a new combination that can get them back to the World Series is there.  The same can't be said for this current roster that has so painfully shown this post-season that their ceiling is that of  playoff also-ran.