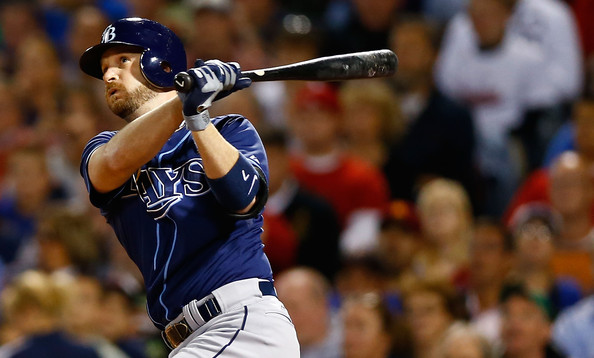 Earlier tonight, Jon Heyman of CBS reported that free agent utility infielder Jeff Keppinger had fractured his fibula after a fall at home. Keppinger has already had surgery and is recovering, hopeful that he'll be fully healthy for the beginning of Spring Training. While Keppinger's injury will probably hurt the overall interest in Keppinger on the free agent market, the Tampa Bay Rays (Keppinger's 2012 team) could be the beneficiary of this injury.

2012 was a career year for Keppinger in Tampa Bay, as the 32-year old veteran infielder posted an .806 OPS with a career-best nine homers in 418 plate appearances. He played first, second, and third base for the Rays, giving Tampa Bay some much-needed insurance while Evan Longoria was recovering from a torn hamstring during the middle of the season.

But after his great year, Keppinger was primed to cash in as a member of an underwhelming free agent market in the infield. From a utility standpoint, Keppinger was likely second to just Maicier Izturis, who got a three-year deal with the Blue Jays earlier this month. With Izturis signing early, Keppinger seemed primed to get a multi-year deal. His leg injury may have sent that possibility up in smoke.

Enter the Rays. Andrew Friedman and his crew have always been adept at finding diamonds in the rough on the free agent market, and Keppinger might be a guy they're able to bring back with a slight raise for 2013, something that would largely be believed to be unthinkable going into the offseason. If interest in Keppinger goes down to a few teams offering him roughly the same salary as his $1.525 million that he made in 2012, wouldn't it make a lot of sense for Friedman and the Rays to offer him a two year deal worth between $3.5 and $4 million? I think that's something Keppinger would jump on after his breakout 2012 season and now, the broken fibula that may send his offseason spiraling into an unknown direction.