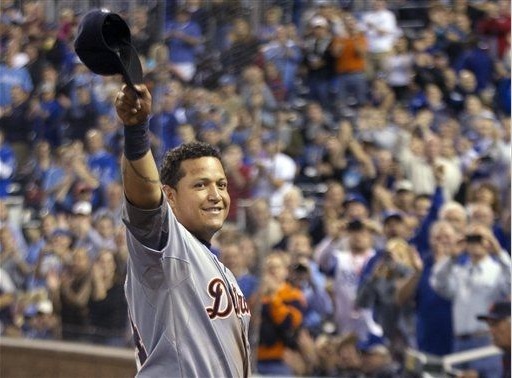 Nobody what side of the Mike Trout/Miguel Cabrera MVP debate you stand on, you have to admit this is pretty cool from purely a fan perspective. Cabrera has locked up the Triple Crown, the first time a player has led the league in batting average, home runs, and RBI since Carl Yastrzemski in 1967.

After Josh Hamilton failed to homer twice to pass Cabrera earlier today in Oakland, and with Cabrera's RBI lead safely tucked into his back pocket, the only challenge Cabrera had left for the Triple Crown was in the batting average category. Trout would need to go 4/4 while Cabrera went 0/4 for Trout to pass him, but the Angels' star rookie went just 2/3 in Los Angeles' 12-0 loss in Seattle to finish with a .326 average. Cabrera went 0/2 during the Tigers game in Kansas City before getting pulled from the game, with his batting average sitting at an AL-best .330.

Cabrera will finish his season with a .330 batting average, 44 home runs, and 139 RBI, all at the top of the American League. Whether or not he's the AL MVP will be learned in about six weeks, but there's no arguing that he's one of the best hitters in the game today, and is on his way to a legendary career at just age 29. Cabrera has 321 home runs, a .321 batting average, and a .956 OPS after ten seasons in the majors, the first of which saw Cabrera win a World Championship with the Marlins.

And on an aside, it's pretty cool for this generation of fans to say that we saw a Triple Crown winner. Something that seemed to be such a myth, such a far-off dream when we were children has hapened, and it's something that we can tell our kids one day, like our parents told us about the players like Yaz, and the Mick, and Teddy Ballgame. Take a step back at cynically looking at everything from a statistical point of view, and look at baseball as a game, as a pastime, as something you put on a pedestal as a child. This is a historic achievement, even if it doesn't mean much nowadays.