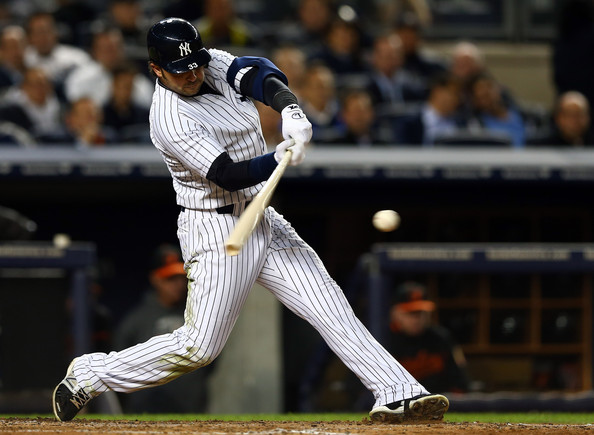 The Cleveland Indians signed Nick Swisher to a four-year, $56 million deal on Sunday with a vesting option for a fifth season. Cleveland was the only serious suitor for Swisher, who preferred to play for a large market team like the Yankees, Angels, or Dodgers, but none had a spot for him in their budget this winter.

Swisher will essentially be replacing Shin-Soo Choo, who was dealt to the Reds last week, in the Indians lineup and will join an outfield that includes Michael Brantley and the newly-acquired Drew Stubbs. If you essentially look at the situation as Cleveland upgrading from Shoo to Swisher, the team makes a substantial gain in power while losing some speed. Swisher has never failed to hit 20 homers in a season over his career, has walked at a double digit rate in all but one season of his career, and has never really dealt with any serious injury issues. In contrast, Choo has just two 20 homer seasons in his career and has played just three non-injury shortened seasons, but has four seasons in his career with as many stolen bases (12) as Swisher has in his entire career.

But even with Choo staying healthy last year, the Indians didn't have a credible power threat in the lineup. No Indians player hit 20 homers, and they've added two (Swisher and Mark Reynolds) that did in 2012. By also inking Swisher to a relatively affordable four-year deal, the Indians retain some flexibility in moving him if things begin to go pear-shaped quickly. The return they got for Choo (essentially, Stubbs and Trevor Bauer) was impressive considering his injury-plagued 2011 and his lack of power in 2012. If Swisher can continue to put together the seasons he has in recent memory, the Indians could easily spin him off to another team for prospects if the team doesn't gel like they're expecting in 2013 and 2014.

Another potential advantage to the signing is Swisher's experience at first base. With Reynolds signed for just 2013, the Indians could move Swisher to first in 2014 if his defense deteriorates in the outfield to the point where he needs to shift to the infield. Or hell, they could even throw him in at first and let Reynolds DH some of the time this year, as the team still doesn't have a solid option there after finally walking away from Travis Hafner.

After having some questions about Cleveland's offseason after the Winter Meetings ended, I'm a little more optimistic about what the Indians have done going into the new year. They've upgraded the offense with Swisher and Reynolds and upgraded the pitching staff with Bauer, while really just giving up Choo's final year of control and adding to a payroll that doesn't have a lot of sizable commitments for 2013. Even with Swisher's $14 million being added, the Indians are at just $38 million in payroll for this season, though they still have seven players to deal with in arbitration. By my math, Cleveland is looking at about $22 million in raises to those seven players, putting their payroll at $60 million, $5 million less than it was in 2012. If the team can trade closer Chris Perez and/or shortstop Asdrubal Cabrera, they'll have even more financial flexibility to potentially go after a starting pitcher.

The Indians probably aren't a contender in 2013 despite the Swisher signing, but they're not in a bad spot for 2014 with just Reynolds (and a couple of relievers, Joe Smith and Matt Albers) hitting free agency after the season. This signing kind of reminds me of Washington's signing of Jayson Werth a couple of winters ago, but the Swisher signing appears to be a lot more favorable to the Indians than the Werth signing has been thusfar to the Nationals.