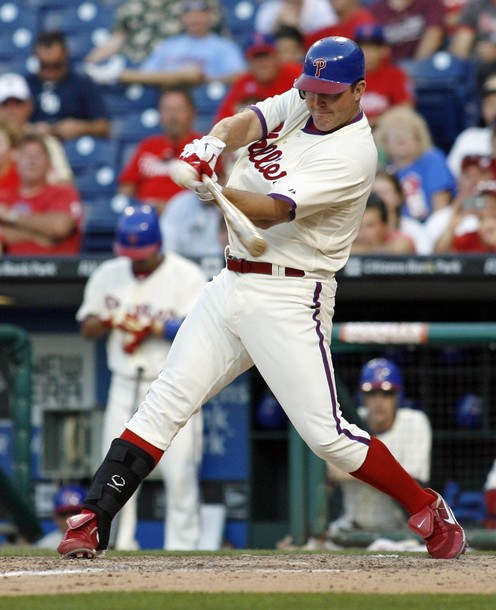 Jim Thome is heading back to the American League where he belongs. Ken Rosenthal of Fox Sports just reported that the Phillies had traded the DH (who couldn't DH with the Phillies aside from interleague play) to the Orioles. The deal will be officially announced after both teams finish their games this afternoon, and there's no word on who the Orioles have given up in return for Thome. Based on what the Indians gave the Twins last August for Thome (a player to ben named that has…still not been named), I highly doubt the Phillies will be getting anything of significance in return for Thome.

It's been a trying year for Thome in Philly, missing time with a back injury in May and pretty much being used as a pinch hitter with the Phillies, a role that doesn't suit him well at all. He started nine games in interleague play as a DH, and showed that he can still mash the ball, OPSing 1.137 with four homers in American League parks. However, he homered just once outside of the DH role, and only had a .368 OPS as a pinch hitter with the Phillies. This just wan't working out for either side.

As for the Orioles, they've had a revolving door at DH this year. Six players have gotten at least ten at bats at the plate appearances, with a majority of them going to Chris Davis, Nick Johnson, and Mark Reynolds. Davis and Reynolds are also both getting time at first base, and with Johnson going on the DL with a wrist injury this week, the contending Orioles needed another option that could contribute on a more consistent basis. Thome homered 15 times in 93 games last year for the Twins and Indians with an .838 OPS, and his DH play this year showed that there's still something left in the tank. At worst case for the Orioles, Thome gives you the same production as their old DH platoon did. At best, he mashes and gives the lineup a solid middle of the order bat. He's only making $1.25 million this year, so it's not as if Baltimore is making a huge financial investment either.

At the end of the day, Baltimore and Philadelphia both made a necessary move, and I really can't find fault on either side.

UPDATE: Jon Heyman of CBS is reporting that the player heading to Philly is high-A pitcher Kyle Simon, Baltimore's fourth round pick in 2011. Simon has a 3.96 ERA this season, striking out 49 and walking 21 in 72 2/3 innings. This doesn't seem like much of a loss for the Orioles.

UPDATE TWO: Rosenthal is now reporting that catcher Gabriel Lino is also going to the Phillies in the deal. Lino is a 19 year-old Venezuelan who had an .832 OPS in the GCL last year for the Orioles, and has a .622 OPS for low-A Delmarva this year. He doesn't seem like much of a loss either, but based on his age, you can't completely write him off as nothing.