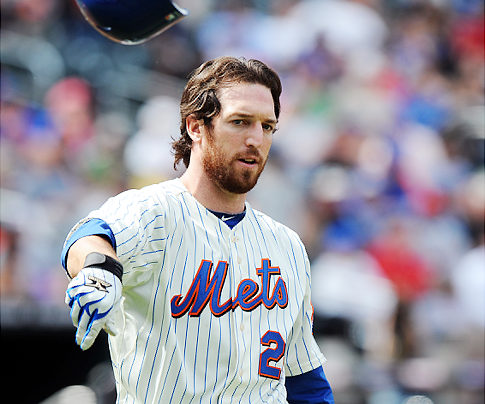 It's not often you hear team sources divulging off-the-field information about a player. Well, leave it to the Mets to take care of that. Adam Ruben from ESPNNewYork.com passed along some interesting information regarding Mets' power hitting first baseman Ike Davis, suggesting that they would be more than willing to trade the slugger due to his unwillingness to take advice from his coaches and his late-night lifestyle choices. Davis started extremely slow this season, hitting .201/.271/.388 in the first half, but has been much better at the plate in the second half, blasting 15 home runs while posting an .859 OPS.

A season ago, Davis missed a huge chunk of time due to a nasty ankle injury, so his slow start can somewhat be explained due to a little rust. Over 1279 career plate appearances with the Mets, Davis has proven two things: he knows the value of a walk (11.2-percent walk rate) and he knows how to hit the long ball (21 AB/HR). Those two factors combined make him an attractive option for teams in need of a little middle of the order pop.

Who could be calling the Mets this offseason asking about Davis?

Orioles – The O's hold an $11M option on Mark Reynolds next season, one that I can't see them exercising given his huge strikeout numbers and regression in power. Davis could split time with Chris Davis between first base and DH and form a power packed Davis Duo.

Rays – Carlos Pena has been a disappointment for the Rays this season and will become a free agent soon. Ike Davis is just the kind of cost-controlled player with power and OBP they might want to pursue.

Blue Jays – Adam Lind is flirting with a sub-.300 OBP for his second straight season. Davis could split some time with Edwin Encarnacion at first and DH adding even more power to the Jays potent lineup.

Red Sox – James Loney is nothing more than a placeholder at this point. Boston could look to lock up a new first baseman of the future by dealing for Davis.

Indians – Cleveland has some intriguing young talent already on the field, which Davis's power bat would accentuate, but their focus could turn to bolstering their pitching staff in the offseason.

Mariners – The M's keep waiting on Justin Smoak to come around, but he's looking more and more like a bust as the years go by. Perhaps a change of scenery for both him and Davis is in order.

Astros – Brett Wallace just can't get things going in the big leagues and the 'Stros may decide to move on. The move to the AL West next season opens up a DH spot, which means that top first base prospect Jonathan Singleton won't be blocked when his time comes. Giants – Perhaps it's time for the Giants to move on from Brandon Belt, whom they just don't seem to completely trust. The Mets could buy low on Belt and swap young first basemen.

Given Davis's youth (25), 30-plus home run power, and ability to get on base at an above average rate, there are sure to be more than a couple of teams picking up the phone and giving Sandy Alderson a call. The slow start that has affected Davis's season could lead to a nice buy-low opportunity for those inquiring, but for now we'll have to wait and see what develops and if Davis's relationship with the Mets has been irreconcilably stained.