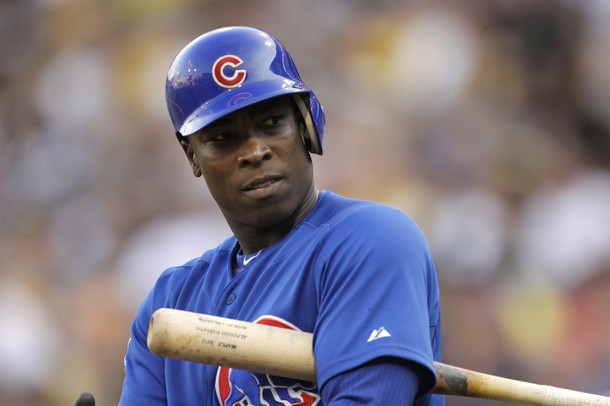 With the Dodgers and Cubs still cahtting about Ryan Dempster, another name has fallen into the deal: highly paid Cubs left fielder Alfonso Soriano. Soriano is involved in the talks between the Cubs and Dodgers along with Dempster, and this would be a huge move if the Cubs were able to package him and his massive contract with Dempster, and get him out of Wrigley.

While Soriano's contract is indeed a behemoth, paying him $38 million over the 2013 and 2014 seasons, he's actually been an effective player for the Cubs this year, He leads all Cubs hitters with 3.0 fWAR, 19 homers, and an .831 OPS (well, the OPS is second to Anthony Rizzo, but Rizzo has only played a month with the team).

Compare Soriano's stats this year with the mess of players the Dodgers have had in left field. Cumulatively, Dodgers left fielders have just four homers and a .682 OPS. Bobby Abreu and Juan Rivera have gotten a bulk of the playing time in left for the Dodgers, and that is absolutely not a good thing for a playoff team. Even though he's making a ton of money, Soriano has been a damn good player this year for the Cubs, and his contract is clouding a lot of people's visions.

And honestly, I'm not even sure if Dempster should be the Dodgers' focus right now. Their top four of Clayton Kershaw, Chad Billingsley, Chris Capuano, and Aaron Harang have all been solid (even if all but Kershaw haven't been spectacular), and they're not even struggling this month. The key is the fifth spot in the rotation, once occupied by Ted Lilly (who hasn't pitched since the end of May, but had a rehab start yesterday where he threw two scoreless innings), then by Nate Eovaldi (dealt in the Hanley Ramirez trade), and now, Stephen Fife. Sure, Dempster would be an upgrade over Fife…but maybe by what, a win? The upgrade from Abreu to Soriano would be much more significant for the Dodgers, and they should be focusing on him rather than Dempster.