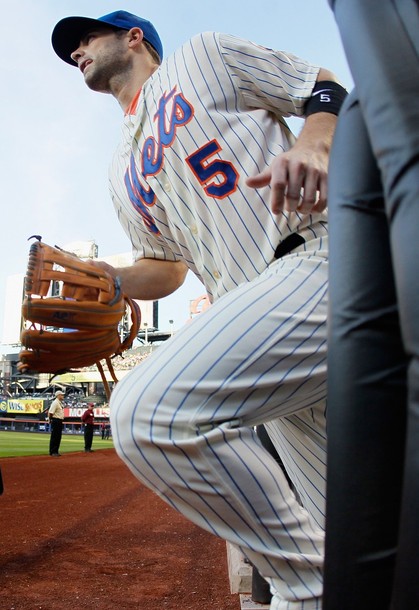 After an offseason of despair in which there was seemingly no money to spend on big name free agents, expectations were not high for the team from Queens. However, a resurgent season from David Wright, the comeback of Johan Santana and the utter dominance of R.A. Dickey have all contributed to a strong start for the Mets, who are two games over .500 and only 4.5 back of the Nationals in the NL East.

David Wright has already been worth four wins above replacement (WAR) this season and is hitting at a sensational level (.357/.461/.580) with eight home runs and seven stolen bases. After two straight seasons of decline – as well as buzzing trade rumors in the offseason – Wright is looking like the player of old, cutting way back on his strikeouts and being more selective at the dish than he ever has. Moving in the fences has surely helped with his power numbers – he already has four home runs at home this season as opposed to the five total he hit at home last season – but what Wright is doing is all a product of him maximizing the skill set he showed when he first arrived to The Show back in 2004. Over the past two seasons, Wright started to press and got way to aggressive, swinging at too many bad pitches and suffering in the strikeout department because of it. While Wright’s numbers are unlikely to hold at such high standards in the long run due to a highly inflated .393 BABIP, his comeback is for real.

Kirk Nieuwenhuis has hit the ground running in his first big league season, batting .291/.352/.432 with six home runs and four stolen bases. Unfortunately for Mets fans – as well as fantasy owners – Nieuwenhuis’s .386 BABIP and lofty 27-percent strikeout rate are both indications that he’s playing a bit over his head right now. He had high strikeout rates at Triple-A as well, so a vast improvement in that category at the big league level might take some time.

The good news is that one of their most disappointing players thus far, Ike Davis, could be on the rebound soon. Davis, who missed much of last season with a nasty ankle injury, is still trying to get rid of the rust that built up while he was out of action. Though Davis has yet to return to form, the underlying skills in terms of plate discipline and power are still there. His strikeout rate is elevated, but should lower as he sees more big league pitches. In 56 plate appearances this month, Davis has walked 12 times against 13 strikeouts. He walked a total of 12 times between April and May. It might be a slower than wanted process and Ike might not hit much higher than .250-.260 overall, but once he finds his power groove, he’ll be a much more valuable bat than he has been with a much better OBP and more frequent souvenirs for the fans beyond the outfield fences.

Johan Santana and R.A. Dickey have led the charge on the pitching end for the Mets and have done so in a flashy fashion. Johan, back in action after shoulder surgery that cost him the 2011 season, has a 3.65 xFIP and a no-hitter to his name. However, after throwing 134 pitches to clinch his no-no, he has been roughed up a bit in his last two outings. Wear-and-tear on his arm is certainly a concern due to his injury history and the fact that he didn’t see much time on a mound last year. The Mets need Santana to stay healthy and productive all season if they want to continue to hunt down the NL East crown. Unfortunately, considering Johan’s circumstance, that would be asking a lot.

Dickey, on the other hand, has been a revelation. He has 90 strikeouts in 90 innings with a 2.20 ERA and 2.63 xFIP. In his last start, he just barely missed a no-no of his own. His knuckleball has been one of the most valuable pitches in baseball and his changeup has delivered a 29-percent whiff rate. On top of those numbers, he has only allowed 66 hits and walked only 19. Yes, his .258 BABIP and 83-percent strand rate seem like regression candidates, but keep in mind that over the past two seasons, Dickey has maintained a lower than normal BABIP (.276 and .278). As long as he can continue to command his baffling knuckler, he should continue to find a high level of success.

Speaking of success, can Jonathan Niese find any at night? He has a 1.99 ERA in day games and a 6.60 ERA at night. His upside remains high as evident by another step forward in his strikeout rate and a ground ball rate of over 50-percent. If Niese can keep the ball in the yard a bit more often, he could find a sharp drop in his ERA.

The starting rotation might actually keep this team afloat for a while, but unfortunately the bullpen does not offer the same upside. Currently, the Mets bullpen ERA (5.46) is the worst in the National League and there aren’t many signs of better weather to come as indicative of their 4.27 bullpen xFIP, the second worst bullpen xFIP in the NL.

The Mets have lost three in a row and six of their last ten, so the regression seems to already be in place. While I like the potential in their rotation, there just doesn’t seem like enough upside in the offense or bullpen to deem this team as a real-deal contender, especially in a strong division.