We’re only days away from the official start to spring training and while pitchers and catchers get ready to report, there are a few former stars still looking for work.

The last I heard of Vladimir Guerrero, he was holding out for a $5 million dollar contract. At this point, he might want to start considering all offers.

Vlad the Impaler has become more like Vlad the flailer in recent years, continuing to swing at pitches well outside the strike-zone with alarming frequency, while taking very few walks. At least in the past Vlad would draw a healthy amount of base on balls, but his walk rate hasn’t risen above 5.5 percent since 2008. Last season he took only 17 unintentional walks, his lowest total in any season in which he played in at least 145 games. However, more alarming that anything else was his drop in power. He finished 2011 with a .416 SLG, the lowest of his career.

The way he hobbles around the playing field, a symptom of having one leg that is slightly longer than the other, makes him look old, but the stagnant pace in which he runs the bases and the fact that he is no longer a threat to steal more than a couple bags are tell-tale signs of his decline athletically.

While Vlad may want teams to envision the 2010 version of himself that hit .300/.345/.496 with 29 home runs and 115 RBI, their eyes have been focused on just about every other available free agent it seems. With only a few days to go until camps open, there are only a few DH spot still left to fill and those teams may decide to simply go with internal options rather than dishing out a few million on a 37-year-old who can’t run and can’t do enough with his bat to warrant such a deal. Instead of Guerrero’s name being mentioned in the rumors currently being strewed about, we hear names like Manny Ramirez – who is staring a 50-game suspension in the face – and Raul Ibanez, because the Yankees seek a left-handed hitting DH option.

According to Baseball Reference, Vlad’s five most comparable players are (in order): Jeff Bagwell, Larry Walker, Jim Rice, Chipper Jones and Billy Williams. There’s two Hall of Famers on that list and Bagwell and Chipper should make it four with Larry Walker also a name being touted as hall worthy. When Vlad does eventually hang em’ up, this year or otherwise, his name is sure to generate hearty discussion when it finds it’s way onto the ballot.

For now, Vlad continues to wait for the right offer, though I’m sure today, his Birthday, would be a lot happier if he already had a team to play for.

Derrek Lee has been quoted as saying that the situation has to be right for him to sign on with a team this season. That situation may be hard to find at this point. The Pirates seemed to have interest after the end of last season, but they acquired Casey McGehee from the Brewers this offseason, who could form a platoon with Garrett Jones at first base. All of the preseason contenders are set at first, so it would take a rebuilding club to make Lee “the right offer.”

Over his career, Lee was a good player that had one great season back in 2005. That year he hit .335/.418/.662 with a whopping 46 home runs, 120 runs scored and 107 RBI. The following season he broke his right forearm in April and never again approached the level of performance he had achieved in that amazing season.

Over the past couple of seasons, Lee has dealt with a variety of nagging injuries which have bogged down his production. However, he did catch fire with the Pirates following a mid-season trade, but that small sample of 113 plate appearances can be taken with a grain of salt.

In Lee’s case, the talent seems to still be present, but perhaps the motivation to put in the long hours and road trips away from his family is not. 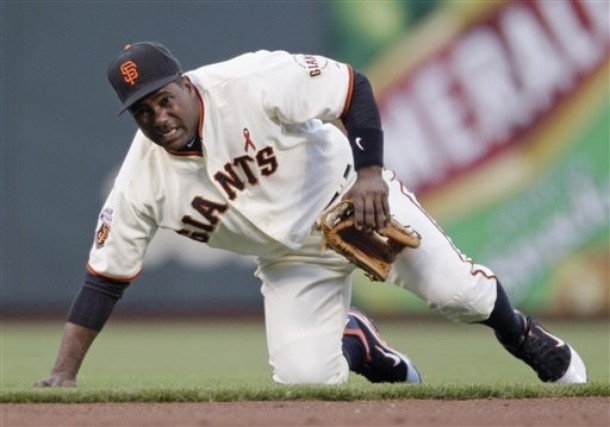 Miguel Tejada has never been known for his plate discipline and that aspect of his game as really caught up to him in his later years. His rate of swings at pitches outside the strike-zone has held well over the 30 percent mark over the last four seasons while his declining power and speed have caused his heavy ground ball rate to mold into more outs than ever before. Though the Giants signed Tejada to be their starting shortstop heading into the 2011 season, the move was clearly an obscene oversight by their front office. Tejada had never been known for his defense and he has compiled a -32.6 ultimate zone rating (UZR) over his career.

During the time when Alex Rodriguez, Derek Jeter and Nomar Garciaparra had formed a new breed of offensively forceful shortstops, Miguel Tejada more than just held his own, he won the AL MVP over A-Rod in 2002. He hit 30 or more home runs four times, 20 or more home runs eight times and his career slash line stands at .285/.336/.457.

At this point, however, teams have little motivation to offer up a deal to a 37-year-old who can’t play defense and can’t hit. Besides, are we sure that 37 is his real age?