Rules.  Major League Baseball has them by the dozens.  Just look through the official rule book.  The last printing of which was 150+ pages with hundreds of rules, many of which had several addendums and clarifications.  It is a wonder how umpiring crews can keep them all straight.

Actually, it isn’t.  The umpires don’t keep them straight at all.  I don’t mean that in the sense that many umpires just plain aren’t good at their job (which is kind of true), so much as how all umpires show a wanton disregard for enforcing specific rules.  This isn’t merely how each umpire has their own personal interpretation of the strike zone.  No, I’m talking about rules that are unambiguously defined in the official rules and simply ignored, completely and totally.

Some of these rules are deliberately overlooked for very good reasons.  Others… well, nobody really knows why umpires have colluded to turn a blind eye.

So which rules are being made mockeries of?  Let’s take a look.

All these rules are direct excerpts from the official MLB rule book.

Rule 1.04(a) Any Playing Field constructed by a professional club after June 1, 1958, shall provide a minimum distance of 325 feet from home base to the nearest fence, stand or other obstruction on the right and left field foul lines, and a minimum distance of 400 feet to the center field fence.

The Pirates, Rays, Astros, Orioles, Giants, Padres and Yankees all violate this rule with their new (or not so new, in Tampa’s case) stadiums. This hardly seems like a big deal though since nobody violates the rule by more than a few feet.  Besides, one of the beauties of the game of baseball is that each stadium has its own unique personality, so overlooking this rule is something we can all live with.

Rule 3.09 Players in uniform shall not address or mingle with spectators, nor sit in the stands before, during, or after a game. No manager, coach or player shall address any spectator before or during a game. Players of opposing teams shall not fraternize at any time while in uniform.

Thank goodness this one goes ignored.  Can you imagine if players were strictly prohibited from signing autographs before games?  Just think of how many fond memories you probably have of arriving early at a game and sneaking down to the field level so you could try and get the attention of your favorite player.  If MLB went by the letter of the law, that would never have been possible.  And think of what kind of effect this rule would’ve had on the career of Sean Casey.  I mean, could he really have been as productive if he hadn’t been able to talk the ear off every opposing baserunner that passed first base?

Rule 3.14 Members of the offensive team shall carry all gloves and other equipment off the field and to the dugout while their team is at bat. No equipment shall be left lying on the field, either in fair or foul territory.

Maybe this is just the neat freak in me, but next time you are at a game, check out the on-deck circle.  Donuts and pine tar rags everywhere, even when the team is on defense.

Rule 4.05(b) Base coaches shall be limited to two in number and shall (1) be in team uniform, and (2) remain within the coach’s box at all times.

Rule 4.05 Comment: It has been common practice for many years for some coaches to put one foot outside the coach’s box or stand astride or otherwise be slightly outside the coaching box lines. Until a batted ball passes a coach, a coach is not permitted to position himself closer to home plate than the coach’s box nor closer to fair territory than the coach’s box. Otherwise, a coach shall not be considered out of the box unless the opposing manager complains, in which case the umpire shall strictly enforce the rule and require all coaches (on both teams) to remain in the coach’s box at all times. It is also common practice for a coach who has a play at his base to leave the coach’s box to signal the player to slide, advance or return to a base. This may be allowed if the coach does not interfere with the play in any manner.

Even though the league has obviously added clarifications to this rule to try and loosen it up a bit, base coaches pretty much stand wherever they feel like.  The place they probably spend the least amount of time is in the actual coaches’ box.  There is probably no harm in not really enforcing this rule since the base coaches seldom ever allow themselves to be in a position where they might interfere with the play.

Now we get to the rules that actually would have an impact if they were enforced.  Everyone constantly complains about the length of baseball games.  One major step forward would be preventing the Nomar Garciaparras of the world from leisurely strolling in and out of the batters’ box, adjusting their equipment, re-fastening their batting gloves, scratching their nuts and so on.  There is no logical reason for umpires to continue ignoring this rule, yet they do. 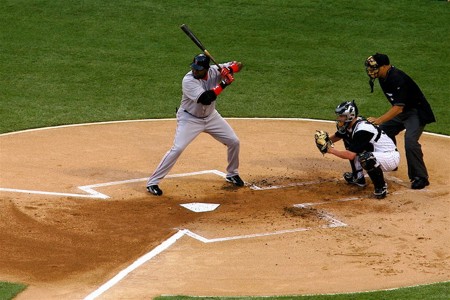 Batters constantly push the limits of this rule.  It has even become a common practice in most MLB games for players to “accidentally” wipe out the lines of the batters’ box.  That this goes unpunished is a true shame.  Batters are potentially gaining unfair advantages by having their back foot well out of the batters’ box, giving them an extra fraction of a second to catch up to a pitch.  Even more problematic are the players that wipe out the lines so they can crowd the plate and make it damn near impossible for them to be pitched on the inner half of the plate while simultaneously making it easier for them to reach outside pitches.

Rule 8.04 When the bases are unoccupied, the pitcher shall deliver the ball to the batter within 12 seconds after he receives the ball. Each time the pitcher delays the game by violating this rule, the umpire shall call “Ball.”

This is the pitchers’ half of the rules that are supposed to be speed up the game, it too never ever gets called.  To be fair, umpires don’t have stopwatches or a pitch clock available to them (though that sounds like a good idea, no?).  Then again, I don’t think anyone needs to be especially adept at keeping time to tell you that Josh Beckett takes three hours in between pitches.  What’s funny is that most any fielder will tell you that they prefer their pitchers to work quickly.  By enforcing this rule, umpires would thus not only be speeding up the game, but probably improving the quality of play at the same time.

8.05 If there is a runner, or runners, it is a balk when—
(a) The pitcher, while touching his plate, makes any motion naturally associated with his pitch and fails to make such delivery;
Rule 8.05(a) Comment: If a lefthanded or righthanded pitcher swings his free foot past the back edge of the pitcher’s rubber, he is required to pitch to the batter except to throw to second base on a pick-off play.

GENERAL INSTRUCTIONS TO UMPIRES – Be courteous, always, to club officials; avoid visiting in club offices and thoughtless familiarity with officers or employees of contesting clubs.   Finally, be courteous, impartial and firm, and so compel respect from all.

And these are just the “official” rules of Major League Baseball.  There isn’t enough room on the internet for us to review the haphazard enforcement of all the “unwritten” rules of baseball.