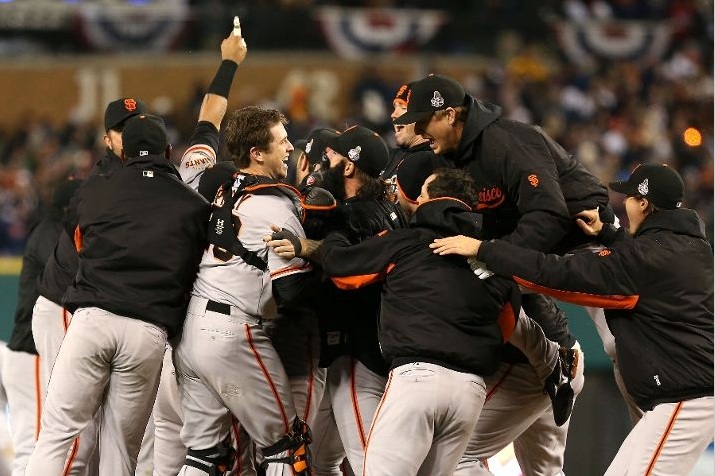 The San Francisco Giants beat the Detroit Tigers 4-3 in ten innings in game four of the World Series, and became the champions of baseball with a 4-0 series sweep.

For the Giants, it's their second title in three years after not having one since moving from New York to San Francisco after the 1957 season. For the Tigers, it's another soul-crushing championship series loss after falling in five games to the Cardinals in 2006. Detroit hasn't won a World Series since 1984.

As for Sunday's game, it was more of the same. Matt Cain had a solid start for the Giants, allowing three runs on five hits over seven innings while walking two and striking out five over the course of the game. Not to be outdone, Max Scherzer allowed three runs on seven hits in 6 1/3 frames, walking one and striking out eight over the course of the game.

But the Tigers offense showed up tonight more than they had all series. Detroit took a 2-1 lead in the third inning after a two-run homer by Miguel Cabrera put them on top. That lead held until the sixth, when a two-run homer by Buster Posey put the Giants back in front 3-2. Detroit quickly tied the game at three after a solo homer by Delmon Young in the bottom of the inning, and the game went into extras.

In the tenth, stand-in Tigers closer Phil Coke struggled for the first time all series. After striking out the side in the ninth, Coke allowed a single to Ryan Theriot to lead the tenth off. Theriot moved up to second on a Brandon Crawford sacrifice bunt, and scored on a Marco Scutaro single after Angel Pagan struck out. Giants closer Sergio Romo faced the top of the order in the bottom of the tenth, and he struck all three of them, Austin Jackson, pinch hitter Don Kelly, and AL Triple Crown winner Miguel Cabrera, to end the game and give the Giants their championship.

Hats off to the Giants, the World Champions of baseball. After falling behind 2-0 in the NLDS and 3-1 in the NLCS, they came into the World Series as a house of fire, and swept the Tigers, seemingly without breaking a sweat.