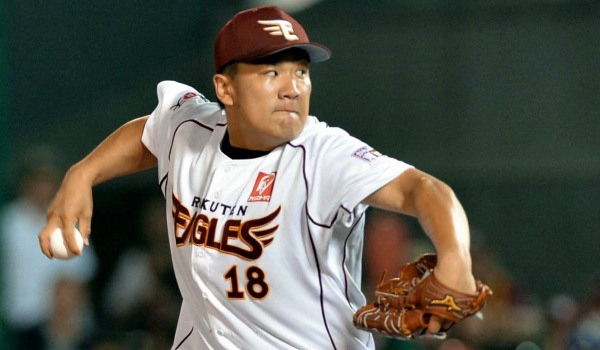 Our long national nightmare is over: the Rakuten Golden Eagles have opted to post Masahiro Tanaka, starting today. The posting process will continue until January 24th, and all teams who bid the $20 million maximum posting fee will be eligible to negotiate a contract with Tanaka. Of course, interest in the 25-year old Japanese right-hander will be off the charts. In all honesty, there's really no reason for a team *not* to submit the posting fee, considering it will only be paid if they sign Tanaka. Why not throw your hat in the derby to at least get a seat at the table?

There are really three categories of teams when it comes to Tanaka: those that will be heavily interested and involved in signing him, those that may have a passing interest, and those that really won't give him much of a look, mostly due to financial reasons. The teams in the top tier are obviously the most compelling when it comes to Tanaka's posting, and those are the ones that will be talked about most extensively.

This is a breakdown of each team's expected interested in Tanaka, and the reasoning for each team.

Arizona Diamondbacks: high interest. The Diamondbacks want Tanaka badly, and Kevin Towers will land one of the free agent starting pitchers on the free agent market come hell or high water. But payroll could be a concern for Arizona – they're already at $82 million, and arbitration raises for Gerardo Parra will likely push them over $90 million, the highest payroll for the Diamondbacks in over a decade. Signing Tanaka would likely make the Diamondbacks blow past their franchise-high $102.8 million payroll from 2002.

Atlanta Braves: low interest. The Braves' payroll is tapped out, and the club needs to worry about extensions for Jason Heyward, Freddie Freeman, Justin Upton, and Andrelton Simmons. The team could use an elite starting pitcher, but the signing of Gavin Floyd earlier this month is probably going to be it for Frank Wren's club.

Baltimore Orioles: medium interest. This is an interesting situation. Baltimore clearly needs rotation help, and the only players with guaranteed contracts beyond the 2014 season are center fielder Adam Jones and prospect Dylan Bundy, courtesy of the major league contract he signed coming out of the Draft. But the Orioles haven't really been known to spend obscene amounts of money, and while this would be a great opportunity for them to break that trend, contract extensions for Matt Wieters and Chris Davis could wind up as priorities.

Boston Red Sox: medium interest. I'm actually not sure that the Red Sox are going to be much of a player in the Tanaka sweepstakes, due in part to the horrible failure of the Daisuke Matsuzaka signing and the concerted effort to clear the club of long-term obligations. Two or three years ago, the Red Sox would have been right in the thick of the bidding for Tanaka. Now? I don't think they're in the top tier.

Chicago Cubs: high interest. The Cubs will not be outbid for Tanaka. But will Tanaka want to player for a franchise that has been a perennial loser? What happens with Tanaka and the Cubs could be the defining moment in the Theo Epstein/Jed Hoyer regime.

Chicago White Sox: low interest. There hasn't even been a whisper about Tanaka and the White Sox. Rick Hahn has signed one major international free agent this offseason in Jose Abreu, and I don't think Tanaka will make two – even though the pale hose have a clear need in their rotation.

Cincinnati Reds: low interest. Cincinnati has had a quiet offseason, and while signing Tanaka would allow them to possibly move Homer Bailey, their payroll constraints will probably prevent a huge move.

Cleveland Indians: low interest. The Tribe needs someone to replace Ubaldo Jimenez, who appears destined to leave Cleveland, in their rotation, but Tanaka would drive their payroll to a decade-high mark and doesn't fit the "buy low" model that Chris Antonetti has been using over the past couple of offseasons.

Colorado Rockies: low interest. Pitching is always placed on a pedestal in Denver, but the Rockies look done after a busy winter.

Detroit Tigers: low interest. The Tigers are tapped out, even after dealing Prince Fielder for Ian Kinsler and dumping off Doug Fister for spare parts. They also have a full rotation, and need to worry about signing Max Scherzer long-term before his free agency next winter.

Houston Astros: medium interest. The Astros have spent more money than anyone expected this offseason, and adding Tanaka would really put a bow on their winter. The financial flexibility that the Astros have would allow them to match nearly any offer made for Tanaka as well.

Kansas City Royals: low interest. If they sign Tanaka, Kansas City's payroll will be at an all-time high. The team couldn't even make a reasonable effort to retain Ervin Santana, what makes anyone think they'll go after Tanaka?

Los Angeles Angels: high interest. Now we're talking. The Angels still need help in their rotation, despite the acquisitions of Hector Santiago and Tyler Skaggs, and Tanaka would be the ideal player for them. Owner Arte Moreno has no qualms about spending money like it's going out of style, and inking a third starter to a long-term contract seems inevitable for Jerry Dipoto's club.

Los Angeles Dodgers: high interest. It's the Dodgers, what do you expect? Tanaka has chosen Casey Close to be his agent, and that's notable because of two of the other players represented by Close – Dodgers starters Zack Greinke and Clayton Kershaw. The pipeline between Japan and Los Angeles started nearly two decades ago with Hideo Nomo, and Tanaka would be the perfect guy to continue that legacy.

Miami Marlins: low interest. Come on now. Close will likely demand a no-trade clause for Tanaka, and that's something the Marlins simply don't do. There's also the whole "fire sale" issue, as every time the Marlins spend a lot of money on a player, he mysteriously gets dealt soon thereafter.

Milwaukee Brewers: low interest. I don't think the Brewers are going to be players for Tanaka – but given the state of their rotation, they probably should be. If Tanaka was posted next winter as opposed to this winter, I think Milwaukee would be a little more involved due to the contracts coming off of their books.

Minnesota Twins: low interest. Ricky Nolasco and Phil Hughes will be it for the high-end spending by Terry Ryan this winter.

New York Mets: low interest. The Mets have spent $87.5 million on three players this offseason, and that's probably more than enough for Sandy Alderson, even though the club could still use another starter. The disaster that was Johan Santana's contract more than likely deep sixes any chance of the Mets getting involved here, though.

New York Yankees: high interest. The Yankees need Tanaka more than potentially any other team in the league. Past CC Sabathia and Hiroki Kuroda, New York's rotation is a mess – and neither of those two veterans is a sure thing after they slowed near the end of 2013. The situation involving Alex Rodriguez's suspension also will have a lot to do with the Yankees' potential spending on Tanaka, and bringing him into the field might not be possible while staying under the luxury tax limit.

Oakland Athletics: low interest. I don't think Billy Beane has ever signed a player to a nine figure contract, and I don't expect it will start any time soon.

Philadelphia Phillies: medium interest. Phillies fans are salivating at the possibility of Tanaka in red pinstripes, and the club's rotation desperately needs him. However, spending limits are more than likely putting him out of play for the Phillies – unless there's an announcement about a new TV deal in the coming weeks.

Pittsburgh Pirates: low interest. The posting fee alone would be equal to roughly 30% of Pittsburgh's 2013 payroll. With all of the young pitching talent coming through the pipeline, Tanaka is an unnecessary luxury for the Pirates.

San Diego Padres: low interest. Signing Tanaka would actually be a good idea for a Padres club with very little long-term money on the books and an extremely friendly pitchers park, but arbitration raises for Chase Headley and Ian Kennedy kill any chance at the Padres working Tanaka into their 2014 payroll. A contract extension for Headley would also a potential stumbling block towards a contract with Tanaka.

San Francisco Giants: low interest. I could make a snarky point about Brian Sabean having no interest in Tanaka because he's not a player already on the Giants, but that would be mean. Anyway, the Giants already have their starting five for 2014 signed (for a total of roughly $58 million), and have four of those players locked up for 2015 as well (for the low cost of nearly that same $58 million), and adding Tanaka wouldn't make a ton of sense.

Seattle Mariners: medium interest. The Mariners need Tanaka, but the ridiculous statements about the club reaching their payroll limit after signing Robinson Cano and Corey Hart isn't inspiring. The team has a strong connection to Japan, and that's something that could be a huge advantage for them in a potential courtship of Tanaka.

St Louis Cardinals: low interest. The Cardinals have something like nine viable starting pitchers, so many that they're just throwing guys into the bullpen to see what happens.

Texas Rangers: high interest. The Rangers swooped in to sign Yu Darvish when he was posted two years ago, and that's a big possible advantage when it comes to Tanaka. Texas has some questions surrounding their rotation, and a 1-2 punch of Darvish and Tanaka would go a long way towards easing any concerns about the health of Matt Harrison and Colby Lewis.

Toronto Blue Jays: high interest. Toronto's rotation was a disaster last year, even after the acquisitions of R.A. Dickey and Josh Johnson. The Blue Jays were reportedly the runner-up in the bidding for Darvish, and I'd guess Alex Anthopolous is going in hard on Tanaka as well.

Washington Nationals: low interest. This isn't happening, especially with extensions for Jordan Zimmermann and Ian Desmond that need to get done.