What happened at Turner Field Wednesday night was ridiculous. But it wasn't the Brewers' Carlos Gomez admiring his home run, then jawing at the opposing pitcher and infielders as he rounded the bases.

No, what was absurd was Braves catcher Brian McCann taking it upon himself to act as the arbiter of baseball's unwritten rules and escalating a tense situation by standing 10 feet up the third-base line and preventing Gomez from touching home plate. That led to both dugouts emptying onto the field and an ensuing brawl that resulted in three ejections. Gomez was tossed from the game, as was Atlanta's Freddie Freeman and coach Terry Pendleton.

Was this really necessary? Did McCann's stand truly accomplish anything?

There was some backstory to Gomez's brash display. As the Milwaukee Journal-Sentinel's Todd Rosiak explains, Gomez believes that Braves pitcher Paul Maholm intentionally hit him with a pitch on June 23. So he felt the need to rub it in a bit after launching the second pitch from Maholm deep into the left-center field seats. Obviously, Gomez knew exactly what he was doing. This wasn't a spontaneous reaction to his accomplishment.

Would it have been better if Gomez had simply put his head down, jogged around the bases, scored his run and gone back to the dugout without trash-talking Maholm, Freeman and McCann? Yes, probably. Be a professional, act like you've done this before and all that. 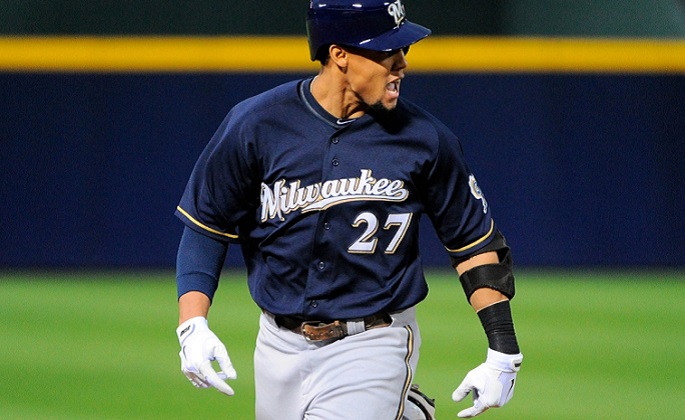 But athletes aren't robots. They use things like previously getting hit by a pitch to motivate themselves for the next encounter. Taking that indignation and anger to fuel their performance is what professional ballplayers have to do to help them play at the highest level of their sport. Gomez could have let his home run and the Turner Field scoreboard speak for themselves. Yet after ramping himself up to get one over on Maholm, isn't it natural for some of that emotion to seep out?

Some more personality on the field, some more flair in the game isn't a bad thing for baseball. Sure, it could get out of hand. Every home run shouldn't be followed by a NFL-style contrived, choreographed end zone celebration. Batters shouldn't do cartwheels and juggle fiery bowling pins after going deep. We don't need to see a Sam Cassell dance around the basepaths.

But what's wrong with some exuberance, especially for an occasion that warrants some celebration? Isn't that what makes sports fun? Think about watching football, basketball or hockey without some jubilation after making a big, game-changing play. Those moments wouldn't be nearly as exciting.

Yes, maybe a first-inning home run that gave the Brewers a 1-0 lead over the Braves was a bit early in Wednesday's game for Gomez to make a show of himself. There was still plenty of baseball to play between those two teams. But if this was all about a personal moment between Gomez and Maholm, was standing at home plate for a few extra seconds to watch the ball go over the fence really going to besmirch the national pastime? Were fathers no longer going to take their sons to a ballgame because of this? 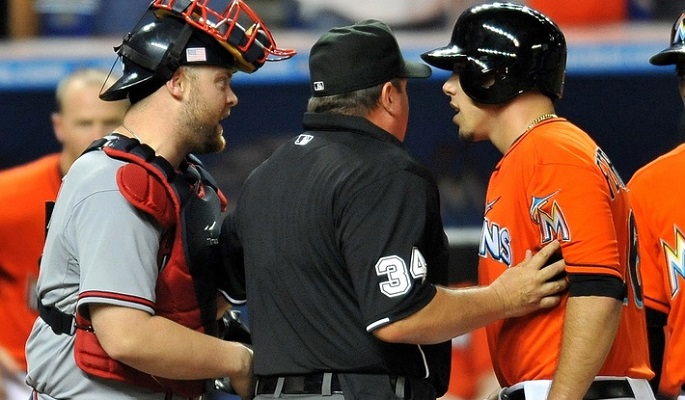 Apparently, no fun is allowed when McCann is on the scene. Opposing batters will follow baseball's unwritten rules or hear about their lack of decorum from him. McCann is the angry football coach on the sideline, waiting for his player to come back to the bench after costing the team a 15-yard penalty for unsportsmanlike conduct. Dadgum it, son! You will respect this game!

Of course, McCann is sticking up for his teammates, which earns respect in the Braves clubhouse. Atlanta pitchers will likely give their best effort for their catcher when he supports them in such a demonstrative manner. Coaches and managers will applaud him for showing leadership and acting as a mentor on the field. And there are plenty of baseball fans who will likely admire McCann for guarding the traditions of the game and those who played before.

However, this has happened with McCann frequently enough in recent months that maybe it's necessary for someone to tell him he should lighten up a bit. There are a few too many videos and photos of McCann yelling at an opposing player for violating some form of baseball etiquette.

A couple of weeks ago, McCann got into it with Marlins pitcher Jose Fernandez after the 21-year-old hit his first major league home run off Mike Minor. It was actually the first home run of Fernandez's professional baseball career. Shouldn't he be allowed a little bit of excitement? As a pitcher, how many home runs is he likely to hit? And again, the kid is 21 years old. Can't this just be chalked up to some youthful exuberance?

Watch the video of the home run. Did Fernandez lie on the ground with his chin resting on his hands, heels kicking in the air like a schoolgirl reading Tiger Beat, as he watched the ball leave the park? No, he took a few extra seconds to watch what had happened. And if you look at his expression, I'd argue there's some surprise there. He couldn't believe what he just did. Let the kid have that moment.

But McCann apparently saw this as a teachable opportunity, one in which he'd impart some wisdom to the plucky upstart about how to carry himself in this game. (Fernandez's manager, Mike Redmond, later expressed dismay over the rookie acting immaturely by showing up the other team.) So just say a few words to the kid about it and get on with the rest of the game. Instead, McCann got in Fernandez's face and touched off another benches-clearing summit. 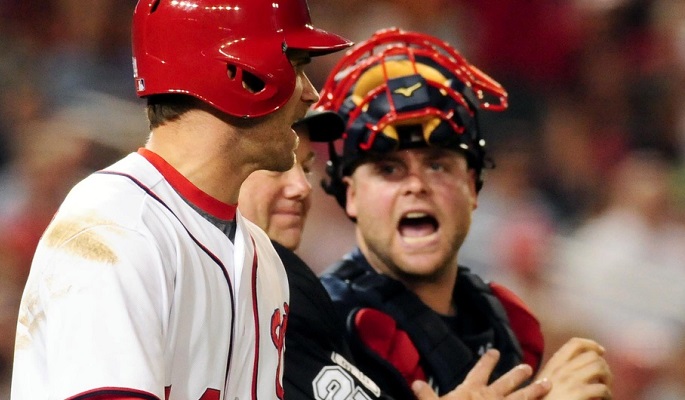 One footnote to this incident: Fernandez did appear to spit on the ground as he rounded third base. Atlanta third baseman Chris Johnson interpreted this as directed at him and/or his teammates, and perhaps that's what inflamed the situation. If there was indeed such a gesture, the Braves' outrage is more understandable. But wasn't their responding behavior equally as unprofessional and unworthy of the game?

That question could also apply to an incident in early August when Atlanta's Julio Teheran drilled the Nationals' Bryce Harper after he admired a home run and perhaps took a bit too long in jogging around the bases. Harper thought the plunking was intentional. Naturally, Teheran and Braves manager Fredi Gonzalez denied that. Gonzalez even chalked up the resulting trash-talk and benches emptying to "boys being boys."

So boys can be boys when the Braves are doing such things, but not when they (McCann, especially) perceive an unwritten rule being broken?

I'm guessing McCann will earn more admirers than detractors for upholding baseball's rules of decorum. Such buzzkills probably hate baggy pants, cuffs that go down to the heel, batting gloves, wristbands, ski masks underneath baseball caps, orange shoes and contemporary rock music playing between innings. Man, there's just so much to get worked up about in a baseball game these days!

But the Braves catcher also comes off as self-important — and more than a bit oversensitive — when taking it upon himself to enforce etiquette and making sure opposing runners only take an appropriate second to watch a long fly ball. Better yet, don't look at all. Just start running. And don't jog. Get around those bases in 20 to 21 seconds. Maybe McCann counts to himself as a batter runs the bases. Perhaps Gonzalez gave him a stopwatch to properly time those jaunts.

This has become tiresome. Baseball benefits from some occasional displays of personality and emotion. And while McCann may feel he's policing baseball's professionalism, isn't he being just as — if not more — disruptive by confronting players and inciting bench-clearing arguments and brawls? Fernandez and Gomez apologized for their presumably unacceptable behavior. When will McCann hold himself accountable to players, coaches and fans for how he's handled himself recently?