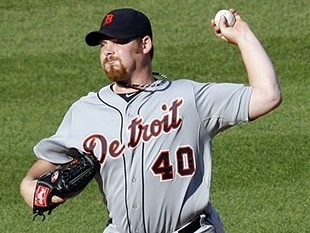 Going into the 2013 season, the biggest question with the Detroit Tigers was who would pitch for them in the ninth inning.

It only took two games for Detroit to run head-on into the closer issue.

On Tuesday, the Tigers went into the ninth inning at Target Field holding a narrow 2-1 lead over the Minnesota Twins. This is the type of situation where closers earn their reputation and paycheck.

Of course, Detroit doesn't really have a closer. Not a designated ninth-inning stopper, that is. The Tigers and manager Jim Leyland decided to go into the season with a "closer-by-committee" approach after rookie Bruce Rondon couldn't win the job in spring training and was assigned to Class AAA Toledo.

Under such an arrangement, anyone could close out a game for the Tigers. Detroit has good bullpen depth this season, giving them plenty of candidates for the job. Joaquin Benoit, Octavio Dotel and Phil Coke are all viable options. If Leyland wanted to be riskier, he could choose Al Alburquerque or Brayan Villarreal.

Two games into the season, however, Leyland appears to prefer Coke for the role — whether he wants to admit it publicly or not. The 30-year-old left-hander got the call in both of the Tigers' games thus far.

Most who follow Detroit figured that's the way Leyland would lean. Coke essentially became the closer during last year's postseason when Jose Valverde became completely ineffective, so it wasn't a stretch to think that he would get the first chance to establish himself as the Tigers' closer early in the season.

Unfortunately, there's one major issue with Coke, one that should probably prevent him from being the full-time closer. He was terrible versus right-handed hitters last season. They hit .396 with a 1.050 OPS against him in 115 plate appearances. During Coke's five previous MLB seasons, he allowed a .301 average and .806 OPS against righties. Given that Coke would face right-handed batters more often than not as a closer, he seemed like a poor choice.

But if Leyland was going to pick his closer in a particular game based on matchups, he could manage around Coke's deficiency versus right-handers. This is where the closer-by-committee approach would presumably work. That is, if you stick with that philosophy.

Mixing and matching relievers worked in the Tigers' season-opening 4-2 win over the Twins. Benoit began the ninth to face Josh Willingham, exactly the sort of hitter Coke shouldn't pitch to. But Leyland went with his de facto closer from there, and Coke got lefty Justin Morneau and switch-hitter Ryan Doumit out to finish the game.

However, the Tigers skipper didn't manage to matchups on Tuesday. The ninth began in similar fashion, with Benoit pitching to right-handed Trevor Plouffe. After Benoit issued a walk, Coke came in to face left-handed Chris Parmalee and got him to fly out. So far, so good. Once again, closer-by-committee was going according to plan.

But then Leyland left Coke in against right-handed Brian Dozier. Maybe that wasn't the worst idea. Dozier batted .234 with a .603 OPS last year. Perhaps this was a right-hander Coke could deal with. Unfortunately, Coke left a 90 mph fastball up in the strike zone, right down the middle of the plate. Dozier punched a single to right field, giving the Twins runners on first and third with one out.

Time to make a pitching change, wouldn't you say? The next batter was Eduardo Escobar, who's batted .366 with an .833 OPS versus left-handed pitching during his career.

This seemed like the place to give Dotel or Alburquerque an opportunity to close it out, if for no other reason than to turn Escobar around. As a left-hander facing righties, his triple-slash average is .162/.236/.182. It's not like Twins manager Ron Gardenhire had any better options on his bench.

Yet Leyland decided to stick with Coke, perhaps thinking he could handle the bottom of the Twins' batting order. One pitch later — a 91 mph fastball again left up in the strike zone, near the middle of the plate — Escobar crushed a ball to left-center that looked to be a home run. The ball stayed in the park, but out of the reach of Tigers center fielder Austin Jackson. It was plenty far enough to drive in the game-tying and game-winning runs for Minnesota.

Two games in, the Tigers — and their fans — encountered what many imagined as the nightmare scenario, the one thing that could possibly prevent Detroit from making the playoffs and returning to the World Series. Losing leads in the ninth inning is even more painful and infuriating when it happens against a Twins team that the Tigers should beat most every time.

Obviously, it's early in the season — very early. That probably can't be stressed enough. But having Coke blow a game calls into question just how long Leyland and the Tigers will go with this closer-by-committee philosophy. A 162-game season does allow some room for experimentation, and Leyland needs time to figure out just who is best suited to save ballgames for his team.

However, the Tigers manager may well end up drawing the conclusion that seemed inevitable going into the season anyway. There's a reason most MLB teams don't go with the closer-by-committee approach.

Whether Detroit eventually goes with Rondon after he settles himself down in the minors or general manager Dave Dombrowski eventually seeks some veteran help, someone in the Tigers bullpen will have to assert himself as the closer.

Leyland and Dombrowski are surely hoping that such a reliever steps up before the closer issue truly becomes a problem for a team expected to contend for an American League pennant.