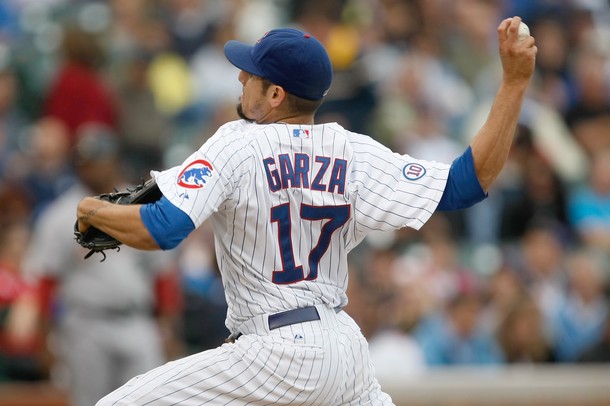 When the offseason began, it was no mystery as to what the Chicago Cubs hoped to achieve. After watching their rotation completely fall apart after a couple of mid-season trades and injuries, they hoped to build up their rotation. And by all accounts they have done exactly that.

The Cubs have built up a rotation that now goes seven deep, having signed four free agent pitchers. Add those to the guys that have been stretched out this winter or will be in the spring, and there's little doubt that the Cubs have one of the deepest rotations in all of baseball, if not the deepest.

However, there are still questions about this group. The main question is whether or not there is an ace among all of those arms. There's no doubt that the quantity is there, but what about the quality?

If you're talking about an ace with the Cubs, then it's going to come down to one of two names: Matt Garza or Jeff Samardzija. While the latter may project to be that guy, or at least a no.2, in the long-term, he's not quite there yet. Which means that Garza is the de facto ace of this club. But is he a true no. 1?

Looking at his stuff, there's no doubt that Garza possess a pretty impressive arsenal of pitches. Though his fastball doesn't touch 100 like it did when he was a top prospect with the Minnesota Twins, he still hangs around in the mid-90s consistently. Couple that with a slider that has accounted for almost half of his strikeouts in the past two seasons, and there really is no doubting that he has some of the best stuff in the bigs. But that doesn't automatically determine his status as an ace.

From a numbers standpoint, we have to look mainly at his 2011 numbers, since he made just 18 starts in 2012 due to injury. The 2011 figures were very impressive, as he made the jump from the American to National League. His ERA was strong, at 3.32 and his FIP was among the best in baseball, sitting at 2.95, which was good for eighth in Major League Baseball. He averaged nine punchouts in each start and walked about three hitters per nine.

Averaging out some of the top arms in the last couple of years, one would need something like an ERA around 2.50, a FIP barely over 2.6, and less than two walks per nine. Garza doesn't quite stack up to those numbers, but it's not like he's too far off.

From a numbers standpoint, one probably could not call Matt Garza an ace. But there's no doubt he has the stuff, and heading into this third year with the Cubs, he has the potential to build on the numbers he has posted the past of seasons. He still has a couple of prime years left, so it's not entirely out of the question that he could put up some very dominant numbers in the next few seasons. Is he an ace, though? With the Cubs, yes, with another club, probably not.

However, it's unlikely that those years will be with the Cubs, as he could be traded by the time the 2013 season rolls around. And he'll make a very good no. 2 for whatever team is able to surrender the pieces to acquire him when that time comes.