Coming off of a 107 loss season in 2012 and heading into 2013 with a $26 million payroll, expectations were low for the Houston Astros this season. Through 60 games, the team has a 22-38 record. They're last in the AL West, and have the worst record in the American League. Yet, there have been a few positives thusfar for the Astros this season, perhaps giving them some hope for the future outside of their loaded farm system. 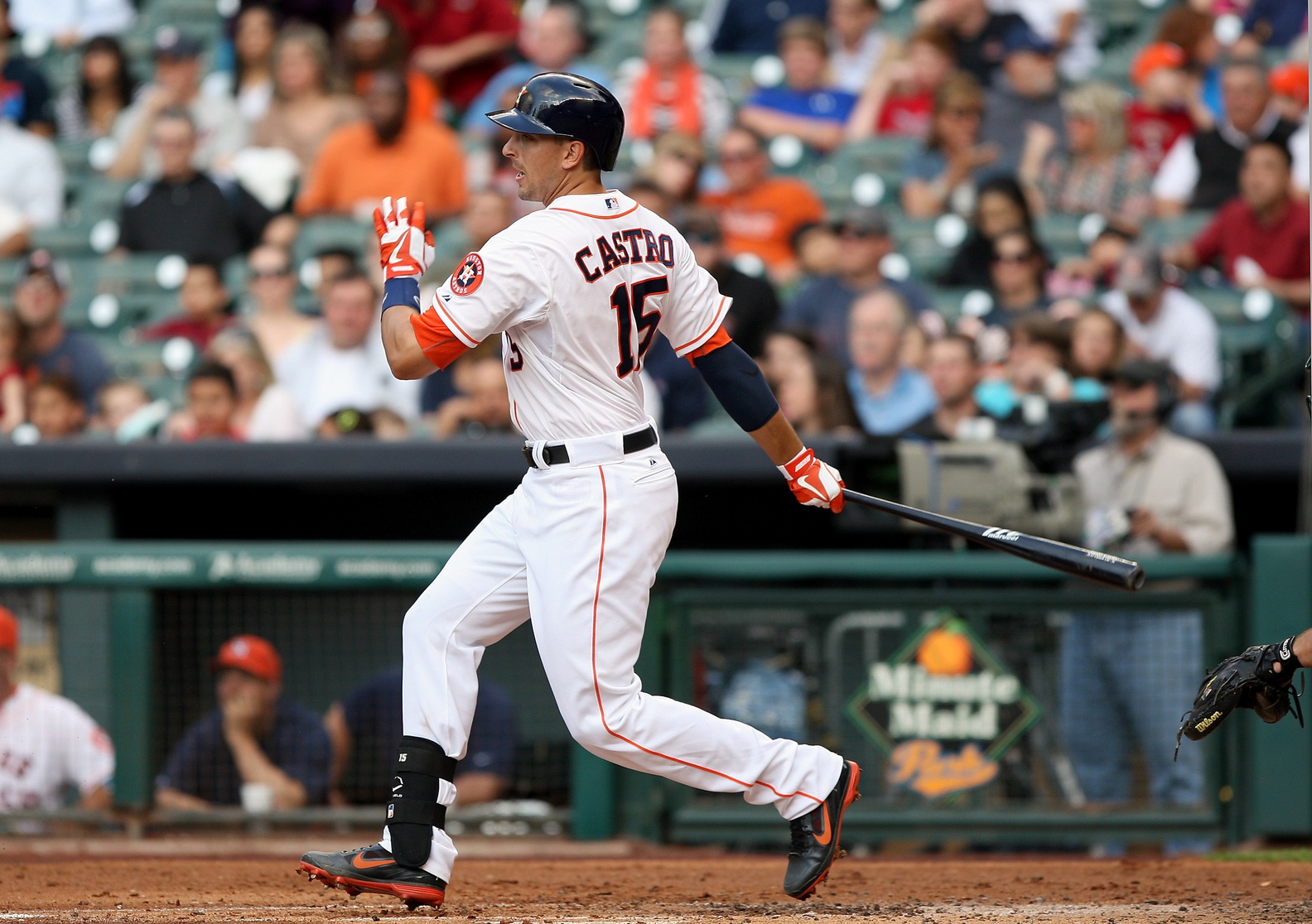 Jason Castro is finally living up to his top ten draft status. Castro was the tenth overall pick in the 2008 draft by the Astros, and has spent parts of three seasons in the majors. He was awful in 67 games in his rookie year of 2010, and missed all of 2011 following a torn ACL. He missed a month with a meniscus injury in 2012, but his .257/.334/.401 line inspired some confidence. This year, Castro has taken the next step. He's played in 51 of Houston's first 60 games, standard for most starting catchers across the league. His 1.4 fWAR is more than he had accrued in all of his major league career up to this point, and his eight homers have also doubled his career total coming into this season. His offensive numbers (.271/.329/.479) are firmly above average for backstops across the league, and at just 25 (26 later this month), the best may be yet to come. Houston has also gotten phenomenal production from Castro's backup Carlos Corporan, and the team's cumulative .366 wOBA and 132 wRC+ for backstops is third-best in baseball behind just the Braves and Indians.

Carlos Pena has successfully rebuilt his value for a midseason trade. Calling Pena's 2012 with the Rays a disaster might be putting it too kindly. He hit just .197/.330/.354, striking out at a 30% clip and hitting just 19 homers, the first time he's been under 20 homers in his last six seasons. This year, Pena has already nearly eclipsed his 0.7 fWAR from last season, totaling 0.5 fWAR in 58 games while splitting time between first base and DH.. While his .160 ISO is only a hair better than the .157 mark he posted a season ago, Pena is getting some more luck with his BABIP (.323 for the season), and his $2.9 million salary and non-inept production will likely make dealing him much easier for Houston than we thought coming into the season.

Bud Norris could be the hottest pitcher in the July trade market. The teams who are buyers and sellers aren't truly fleshed out yet. But when you look at the pitchers that might be trade bait, Norris appears to be the safest and cheapest of a weak crop that includes Ricky Nolasco, Matt Garza, and Yovani Gallardo. Norris is making just $3 million this season, and still has two seasons of arbitration left, and another solid month could lead to the Astros getting a nice batch of talented prospects in return. Norris' huge drop in strikeout rate is likely a red flag, as are his completely bizarre home/road splits, but Norris has only gotten better as the season has gone on, and his low salary could separate him from the other options on the trade market.

Jordan Lyles has taken a huge step forward. You could argue that the Astros pushed the talented Lyles a bit too hard in 2011 and 2012. He was just 20 and 21 over those two seasons, and while he showed flashes of brilliance, it was evident that he needed more time in the minors. Lyles spent all of April in the minors this year, and has made seven starts in the majors since being called up at the beginning of May. If you exclude an eight run destruction by the Rangers in Lyles' third start of the year, he has just a 2.67 ERA for the season and has allowed more than two runs just once. He's not dominating, but he is getting groundballs at a 48% clip for the season and is finally getting some luck with his strand rate, sitting at 74.4% this year. He's also throwing harder than he did in both 2011 and 2012, and considering he's just 22, there's some signs that he's finally coming close to tapping into his potential.

It's not much, but it's at least something for Astros fans to enjoy at the major league level right now. But if fans don't want to support the major league club, there's always the option of watching the Astros' loaded minor league system via MiLB.tv. The AAA Oklahoma City Redhawks are 32-25 and feature solid prospects like Jonathan Villar, Jarred Cosart, and recently promoted Asher Wojciechowski. The AA Corpus Christi Hooks feature mashers George Springer, Jonathan Singleton, and Domingo Santana, along with pitcher Mike Foltynewicz, and are a Texas League best 36-22. High-A Lancaster leads the California League with a 35-24 record, and they've got prospects like Nolan Fontana and Delino DeShields Jr, starring at the level. 2012 draft picks Carlos Correa, Lance McCullers Jr, and Rio Rioz are all starring for the class A Quad Cities River Bandits as well.

Yeah, it's been a rough go for the Astros in the majors this season, but all things considered, it could be a lot worse.