On Monday, Joe Lucia listed five MLB teams who appear to be done with their offseason shopping, at least in terms of major moves. But there are several other clubs that still have much work to do in improving their rosters for next season, with many options available on the free agent and trade markets. Here are five teams who fit that category, whose offseasons aren't yet finished. Splashy moves are still possibilities for these clubs, which keeps a potentially exciting winter alive.

New York Yankees
With the splashy signings that the Yankees have made this offseason, putting them on this list might not seem right. For most other clubs, signing Brian McCann, Jacoby Ellsbury and Carlos Beltran would constitute an extremely productive winter. The Yankees' lineup will certainly be more productive next season, though depth could once again be an issue.

But what about the pitching? The Yankees did re-sign Hiroki Kuroda to a one-year deal, bringing back one of their best starters during the past two seasons. Yet what do the Yanks have in their rotation after CC Sabathia, Kuroda and Ivan Nova? David Phelps and Michael Pineda are possibilities, though Pineda's health continues to be questionable. Adam Warren could be another option. However, it's clear why the Yankees are hoping Japanese pitcher Masahiro Tanaka will be posted. Their rotation needs an ace-caliber starter who's under the age of 30 and presents the team with some upside to look forward to.

Milwaukee Brewers
Will the Brewers trade for a first baseman, such as the Mets' Ike Davis? That's been a persistent rumor through the offseason thus far. Fox Sports' Ken Rosenthal reports that Milwaukee could also be looking at Michael Young for the position. The Brewers could possibly target someone else in trade, such as Mitch Moreland or Justin Smoak. Signing Kendrys Morales is likely out of the question, as he would cost a first-round draft pick and the Brewers' No. 12 selection isn't protected.

What about the team's situation at second base? If Scooter Gennett is the starter, does Rickie Weeks need to be traded? That won't be easy, with Weeks set to earn $11 million in the final year of his contract. But if Milwaukee eats some of that salary, perhaps he can be dealt for some relief help (preferably a pitcher with strikeout stuff) and bench depth. 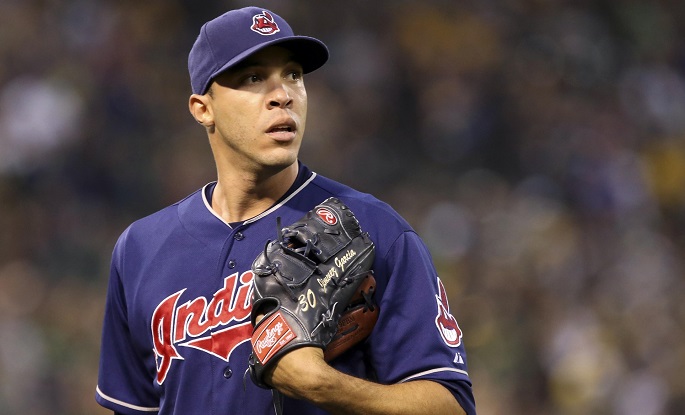 Cleveland Indians
Perhaps the Indians don't have to do much to keep up with their competition in the AL Central. Cleveland certainly shouldn't make moves just to respond to what the Twins, Royals and White Sox have done to improve themselves. (Whether or not the Tigers have improved their roster is open to interpretation.) Of course, the Tribe hasn't stood pat, signing outfielder David Murphy and closer John Axford, while trading Drew Stubbs for left-handed pitcher Josh Outman.

But in losing Scott Kazmir to free agency and possibly losing Ubaldo Jimenez as well, the Tribe faces going into next season with a less talented team than the club that won 92 games and a wild-card playoff spot. Do the Indians need to replace Jimenez if he signs elsewhere or hope that young arms like Josh Tomlin, Trevor Bauer or Carlos Carrasco address that need? If Yan Gomes is the starting catcher, Cleveland probably needs to sign a reserve catcher, unless Carlos Santana fills in as the backup.

Toronto Blue Jays
After emerging as the champion of the offseason last year, the Blue Jays have been quiet this winter. Perhaps the thinking is that acquisitions like shortstop Jose Reyes, outfielder Melky Cabrera and pitcher R.A. Dickey will yield more dividends in their second season with Toronto than they did in their first. Maybe that's the smart approach, along with waiting (hoping?) that young talent like Anthony Gose and Marcus Stroman develop into major league contributors next season. Injured players such as Jose Bautista, Brandon Morrow, Kyle Drabek and Drew Hutchison staying healthy next year would also make a huge difference.

However, Toronto could still make a big move, such as trading for David Price or Jeff Samardzija. The Blue Jays may also look at upgrading at second base. Would they be interested in Brandon Phillips or Dan Uggla? The depth is available to pull off those kinds of deals. Can the Blue Jays compete in the AL East and wild-card races otherwise?

New York Mets
The Mets have done a nice job of bolstering their outfield with Curtis Granderson and Chris Young, while adding a No. 1 caliber starter in Bartolo Colon. But the team still has a big question at shortstop and needs to strengthen its bullpen behind Bobby Parnell and Vic Black. Logjams at first and second base also need to be addressed, which could be solved by trading Ike Davis and Daniel Murphy. There seems to be enough interest in Davis from teams like the Brewers and Pirates to believe that he'll eventually be dealt. However, the Mets may decide to keep Murphy and keep Eric Young Jr. as a fourth outfielder, rather than move him to second base.

Stephen Drew would be a great fit at shortstop, if the Mets are willing to offer a three- or four-year deal. Plenty of bullpen help is also still available on the free agent market, especially if the Mets want to sign a closer like Fernando Rodney or Chris Perez. But a better move might be keeping Parnell in the ninth inning and taking the opportunity to sign a reclamation project like Andrew Bailey, Joel Hanrahan or Ryan Madson for a setup role. Either of them could have a shot at taking over as closer if Parnell falters.