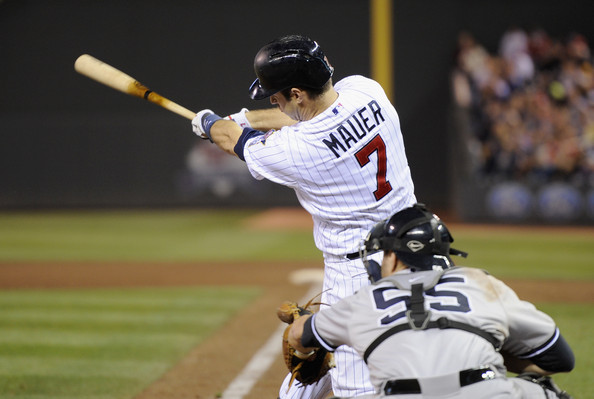 We're in Hall of Fame overload here at TOC. With the announcement of the Class of 2013 coming at 2 PM on Wednesday, talk about the ballot has reached a critical mass. However, we're gonna take things in a bit of a different direction. What current players could get into the Hall of Fame one day? Now, I'm not thinking about your Mike Trout/Bryce Harper types of players that have played briefly in the majors and have shown superstar potential. I'm also not thinking about the players nearing the tail-end of their careers like Derek Jeter, Mariano Rivera, and Ichiro. And hell, I'm not even talking about the superstars that have been earmarked for the Hall of Fame like Albert Pujols, Ryan Braun, and Justin Verlander. Who are the players in the league today that have had great careers and have been seemingly forgotten about in the grand scheme of the Hall of Fame?

I'm going to restrict the criteria to players that are between ages 26 and 34 as of January 1, 2013. I'm not saying all of these players are slam dunk, first ballot Hall of Famers, and I'm also not saying that they're locks to get in at all. But if they keep rolling around the way they are, these are five players that could get a lot of love when their names appear on the Hall of Fame ballot.

Joe Mauer. Mauer will be 30 in April. After an injury-plagued 2011 made an eventual switch to first base or DH look like it would happen sooner than anyone thought, Mauer was healthy in 2012 and still managed to log 74 games behind the plate. He's probably just a part-time catcher from here on out, but his overall numbers compare very well to other top-tier catchers throughout baseball history. Mauer's career .323 batting average is the best all-time for a catcher in the modern era, and he's already top 30 all-time among catchers in fWAR. if you look just through the age 29 season for all catchers in MLB history, Mauer's 40.1 fWAR is tied for seventh all-time, a hair behind Mike Piazza for sixth. Mauer will likely start to break down as his career progresses, but if the Twins don't run him into the ground behind the plate, he could go down in history as one of the best catchers in history.

Adrian Beltre. Beltre will be 34 in April, and his career has taken a dramatic upswing in his three seasons since leaving Seattle. Widely considered an elite defender at third, Beltre's bat is coming back to fire in recent years. His 346 homers are 12th all-time among third basemen, and if he gets to 400, he'll be behind just five elite players (Alex Rodriguez, Harmon Killebrew [who played a multitude of positions], Mike Schmidt, Eddie Mathews, and Chipper Jones) and Darrell Evans. Throw in his defensive prowess (four Gold Gloves, if you're into that kind of thing), and you've got the makings of a fantastic Hall of Fame case.

Jonathan Papelbon. It'll be interesting to see what happens with Papelbon's Hall of Fame chances when he retires. By that time, we'll have seen what happens with guys like Rivera, Trevor Hoffman, Billy Wagner, the most dominant examples of the modern closer. There hasn't been an example of a one inning closer with longevity on the ballot, and I'm sure there is going to be a lot of talk about their impact on the game when the time arises. But John Franco, who retired second on the all-time saves list, was one and done on the ballot despite being a multiple inning guy. Lee Smith retired as the all-time saves leader, and cracked 50% for the first time last year. Papelbon has a 2.34 career ERA and a 4.52 strikeout to walk ratio that is better than that of Wagner, Rivera, and Hoffman. Playing in Philadelphia for the next three (possibly four) seasons, he'll have plenty of opportunities for saves, and could be in the top six or seven in saves all-time while still having some gas left in his tank. However, this all depends on the voting for induction in 2016, when the names Wagner and Hoffman show up on the ballot.

Robinson Cano. Jeff Kent is the all-time home run leader among second basemen with 377. Cano is at 177, and turned 30 this past November. Cano's overall offensive numbers compare very favorably to those of Kent, and if Cano ages as gracefully as Kent did, the two have very similar cases. Cano is also roughly halfway to 3000 hits. but 2400 is really the magic number for second basemen (all 2B with at least 2400 hits are in the HOF aside from Biggio, Kent, and the immortal Julio Franco [who played several positions]). Cano needs less than 1000 hits to get there, and he'll get there easily barring an injury.

Johan Santana. Santana is a big time peak vs longevity type of player. He won two Cy Young awards and finished in the top five three more times before turning 30. He's led the league in ERA and strikeouts three times apiece. Yet, he missed all of 2011, was pretty bad in 2012 after throwing his no-hitter, and who knows what the future holds for him after the shoulder issues that have plagued him over the last two years. His career through age 29 was fantastic, but he'll be 34 in March and still doesn't have 150 career wins. If Santana doesn't get bak on track in 2013, the brilliant start he had to his career could be just a footnote in baseball history. I think Santana will also be compared to Pedro Martinez, who was done as a dominant performer at age 34, but had a peak that absolutely put Santana's to shame.