At the end of last night's Rays-Rangers game, home plate umpire Marty Foster called Ben Zobrist out on a pitch that was (clearly) a ball, as you can see in the video above. Also in the video above, you can see the reactions from Zobrist and Rays manager Joe Maddon, who were clearly displeased at the awful call. But while the call was clearly a disgrace, and Foster won't even have to publicly defend his call (thanks MLB!), just how much of a screwjob was it?

During Zobrist's at bat against Joe Nathan, he didn't swing the bat once, and was thrown just one pitch that was in the strike zone. Take a look at the strikezone map.

The pitch in question is labeled as #6 on here, and was clearly outside while also being at the bottom edge of the zone. There's no questioning it was an awful call, and that Foster screwed up. Nathan closed out the game by striking out Zobrist while throwing one pitch that was even a borderline strike. That takes skill.

The weird thing is that it really only was Zobrist's at bat were Nathan was getting ridiculous calls like that. Here's his plot for the rest of the inning, including Zobrist's at bat.

Nathan actually had two pretty clear strikes called balls (the green squares in the middle of the chart), and no pitches outside of the zone called in at bats other than Zobrist's.

So what about Foster's zone over the rest of the night? Well, he was pretty egregious towards both lefties and righties, for both Rays and Rangers pitchers. 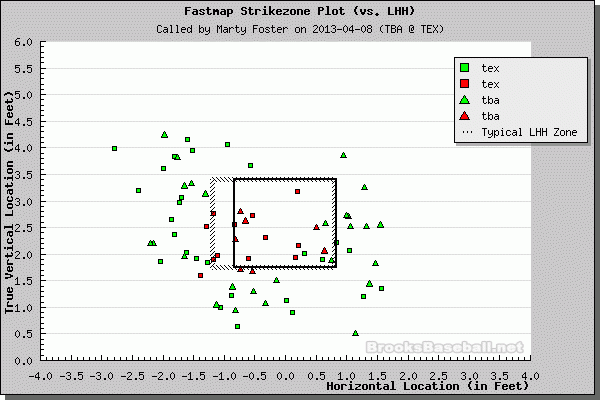 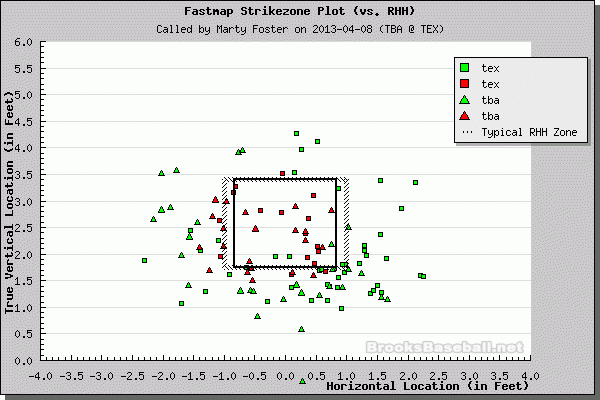 Against right-handers, it was a whole different story. Foster was calling the inside strike all night for both teams, with the Rays getting no less than seven pitches called strikes on the edge or beyond the typical zone, along with five below the zone. Not to be outdone, the Rangers got two inside pitches outside of the typical zone, two on the border of the actual zone, two low, and one high. Texas had two pitches in the zone called balls, and the Rays had one.

Foster called the outside strike for lefties a bit during his only other umpiring assignment of the year, in the Phillies-Braves game on April 4th, including one pitch for each team that was just about as egregious as his call on Zobrist. For his career, Foster tends to skew towards calling the outside strike against left-handers, at this heat map indicates.

All in all, Zobrist got royally screwed by Foster, but that's par for the course for him. He was calling pitches on the left side of the plate strikes all night for lefties and righties, and while that doesn't excuse his awful call by any means, it wasn't really an outlier. I actually think that's the scary part about this: this wasn't an isolated incident. Foster's zone is skewed pretty heavily towards the outer half against lefties, and if a pitcher knows that, he can definitely take advantage of it like Nathan did with Zobrist (though that probably wasn't by design).

Thanks to Brooks Baseball for all of the images in this post.