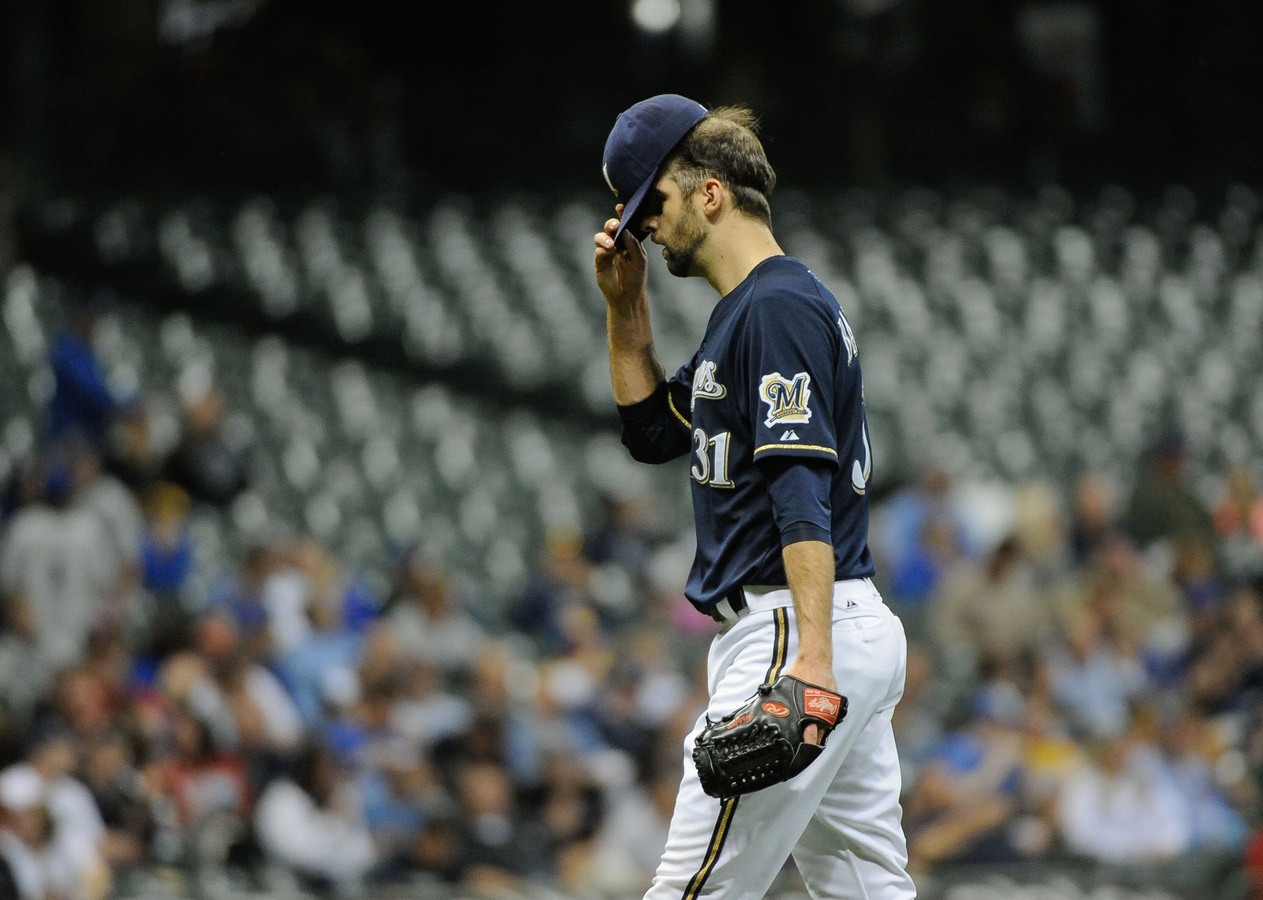 Despite the Brewers beating the A's 4-3 in ten innings on Tuesday night, they're still 22-35 this season. They're coming off of a 6-22 month of May, tying the record for the worst month in franchise history. They're in last place in the NL Central, 15.5 games behind the division-leading Cardinals, who happen to have the best record in baseball. Their -53 run differential is second-worst in the NL, ahead of only Miami, and let's be honest, the Marlins aren't trying to be good this year. The Brewers are.

Or at least, were. Doug Melvin is stopping short of saying the Brewers are punting 2013, but he is saying he's done trading prospects to win major league games for the time being.

"If we make any more trades this year, it's going to be for two or three years from now instead of now.

"I'm not going to be trading any young players to win games."

Now, this might not seem like a big deal on the surface, but for the Brewers it is. Ever since Mark Attanasio bought the team in 2004, he's been committed to putting a winning product — even if it means barely sneaking over .500 — on the field. To many fans who sat through the 90s and early 2000s, that kind of attitude is appreciated. Unfortunately, that's not the best way to run a small-market team.

In the span of five or six years, the Brewers have gone from having one of the best farm systems in baseball to one of the most depleted. Over that span, trades for CC Sabathia, Shaun Marcum and Zack Greinke have covered for the organization's complete inability (outside of Yovani Gallardo) to develop its own pitching. What's left is a gutted farm system that at best will provide role players and bottom-of-the-rotation starters. To make matters worse, the last-minute signing of Kyle Lohse this spring means the Brewers won't have a first round pick in this week's draft.

The prospects from that first great wave that pushed the Brewers back into respectability — Prince Fielder, Corey Hart and Rickie Weeks to name a few — are either gone or starting to break down. The guys that were supposed to replace them were either traded or didn't pan out. It appears the desire to stay in contention as long as possible has pushed the Brewers to a breaking point. For nearly 10 years, Attanasio has given his stamp of approval — or even engineered moves himself — for any deal that would mean a couple extra wins. Now, it looks like he's willing to allow Melvin to use the "r" word.

So of course the question now is if the Brewers were to start a rebuild with a July firesale, who would be on the block? Milwaukee's problem is that while they have pieces to move, they're not without significant warts or risk — in other words, they're probably not going to be getting any Top 100 prospects back in return. 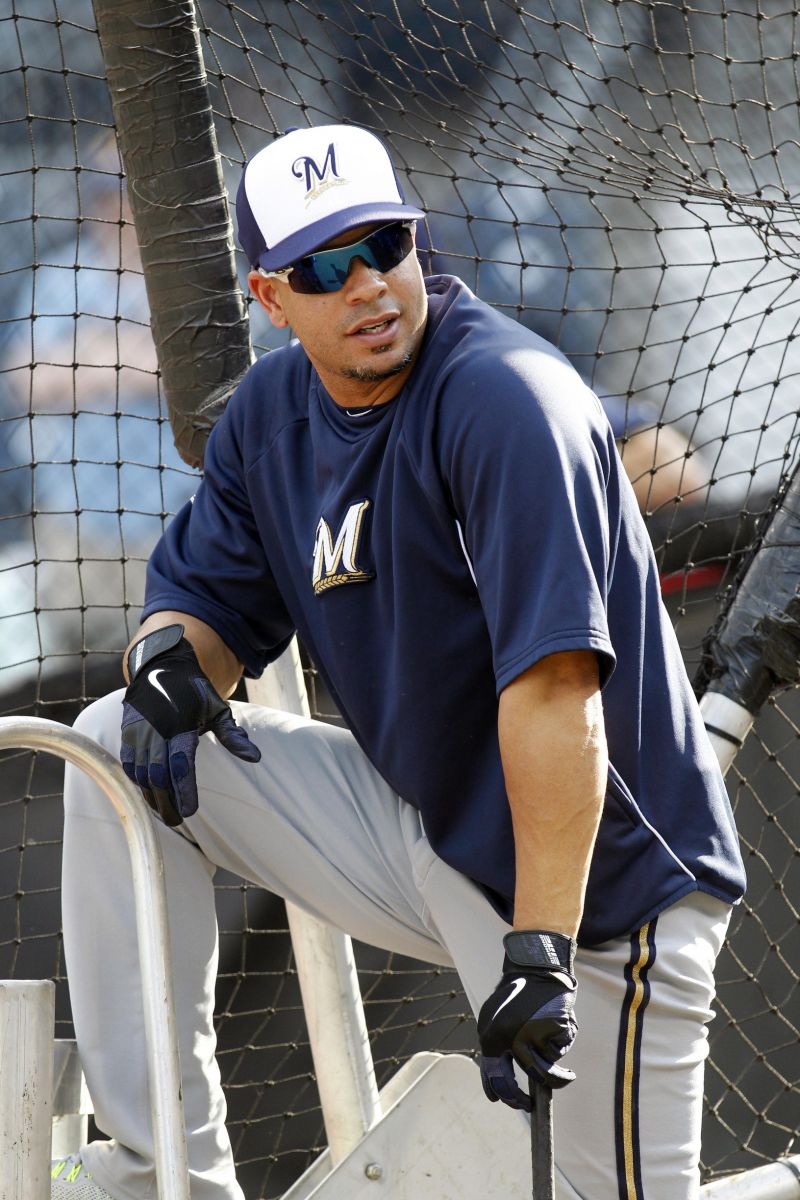 Aramis Ramirez is probably the most obvious name, and as he recently told reporters, he knows the rumors will come if the Brewers don't start winning in a hurry. Despite missing a month with a sprained knee, Ramirez has gotten off to a strong start this season, hitting .306/.387/.500. He's the one impact bat the Brewers would likely be willing to part with, and as teams start to look to add more power to their lineup in July, he could become a hot commodity. Of course, the caveat here is that Ramirez has to stay healthy long enough for the Brewers to trade him, and any team dealing for him would have to understand the injury and defensive risks. There's also the matter of the $10 million he's making this year and the $16 million he's owed next year for his age-36 season…and then there's a $4 million buyout for a $14 million option for his age-37 season. To get anything good back in return, the Brewers might have to be willing to eat a chunk of that money.

Lohse, another recent signee, might make sense as a trade candidate. Making $11 million over each of the next three seasons, Lohse said he signed on with the Brewers because he thought they could contend. When your GM starts talking about making moves for 3 years down the road, though — when you're scheduled to be on your way out — perhaps you wouldn't mind a trade. Dealing Lohse might help the Brewers make up for some of what they lost when they signed him, but again, first-round talent in return seems unlikely. It doesn't help that Lohse has given up 12 home runs in his first 11 Brewers starts and has had some elbow issues pop up recently, either. Still, a strong month or two could prop his value back up.

Then there's Lohse's rotation mate, Yovani Gallardo. He's signed through next season with a team option for 2015, but is suffering through an uncharacteristically rough season — on and off the field. In case you forgot, aside from his ERA that's currently sitting north of 5, Gallardo was arrested for a DUI in April. After posting four consecutive 200-strikeout seasons, Gallardo's strikeout rates have dipped to career lows this year and his fastball is barely clocking in over 90 mph. Jon Heyman floated rumors of Baltimore potentially being interested, but like Ramirez and Lohse, there's a bit of money involved. His salary jumps to $11.25 million next season, and the $13 million option for 2015 comes with a $600,000 buyout.

As bad as Gallardo has struggled this year, no Brewer has struggled quite like Weeks. For the second straight year, Weeks is mired in a horrid first-half slump. He was able to dig out of it in the second half last season, but now that he's 30, it's fair to start wondering if he's just close to being done. Weeks has always been a poor defender at second base and never made much contact, but his walk rates and power still made him one of the better offensive second basemen in the game. Unfortunately, the power has abandoned him this season — he needed a home run and a triple Monday night against the A's to get his slugging percentage over .300 (after that game, he was hitting .192/.293/.313, and the Brewers are sticking him into a platoon. Sure enough, he didn't start on Tuesday, but got into the game in the eighth as part of a double switch). He may be a good buy-low candidate for a team looking for some pop (especially against left-handed pitching, which he still hits well), but he is still making $10 million this season and will make $11 million next year.

Unlike everyone else mentioned, Hart is a free agent at the end of this season and could be a solid rental for the last couple months of the season. The problem is Hart has yet to play this season, recovering from yet another offseason knee surgery — this one being a partial microfracture surgery that's taking longer than expected to heal. At this point it's looking like teams may only get to see Hart in action for a few weeks before the deadline, putting a large dent in his trade value. A team may make a deal for him hoping to lock him into an extension before he hits free agency, but signing a 31-year-old 6'6" guy with a bad knee seems like a shaky investment.

Finally, there's an assortment of relievers the Brewers could move if they want to give some younger arms a chance to pitch in the majors. Closer Jim Henderson has been solid since taking over the 9th inning, but is currently on the DL with a hamstring injury. Francisco Rodriguez has stepped in the closer's role once again in Henderson's absence, and probably wouldn't mind a deal to a team that could offer a more permanent role. Burke Badenhop, who the Brewers acquired via trade this offseason, is the kind of solid middle reliever a team might want to pick up in an August waiver deal. Tom Gorzelanny has continued his solid work out of the bullpen and is signed through next season. Michael (don't call him Mike anymore) Gonzalez is on a hot streak after a slow start to the season and always seems to get traded in these situations. Then there's John Axford, for any team thinking they can catch lightning in a bottle twice. Making $5 million this year, Axford's a likely non-tender candidate for Milwaukee otherwise.

So yes, there are a lot of guys the Brewers *could* move if they were to fully commit to a rebuild — it's probably safe to assume the only truly untouchable/unmovable guys at this point are Jean Segura and Ryan Braun (whose $100 million extension doesn't even kick in until 2016), with Carlos Gomez in some sort of "we'll deal him if you overpay" category. The fact that the Brewers are unlikely to get the kind of haul they got for Zack Greinke puts a damper on things, though. While Melvin is saying any deal would be made with sights set on 2-3 years from now, the painful reality for Brewers fans is that it may take longer — especially when you consider who else is in their division, and what they have coming.