The Washington Nationals have played only one game in the 2013 season. Though the Nats are considered a strong contender to win the World Series, what happened in their 2-0 opening day win over the Miami Marlins isn't necessarily reflective of how the rest of the season will work out.

Bryce Harper powered the Nats to victory with two home runs, giving Stephen Strasburg all the offense he and two relievers needed to shut down a lackluster Marlins lineup. (Placido Polanco batting cleanup for Miami says everything you need to know about what kind of offense that team will feature this year.)

The 20-year-old phenom also kept the Marlins off the board in the seventh inning with a rocket throw to home plate, preventing Giancarlo Stanton from scoring a run and eventually leading to an inning-ending double play.

Baseball players can't typically "take over" a game the way a basketball or hockey player can. There are just too many other factors at work. But Harper's performance in the Nats' opening day win was pretty close. His two homers provided all of his team's offense. And his throw killed what was really the Marlins' best — and only — scoring chance in the ballgame.

Obviously, Harper didn't beat Miami by himself. Strasburg allowing only three hits over seven scoreless innings was also a major reason why the Nationals won their season opener. Ryan Zimmerman made several of his usually spectacular defensive plays at third base to keep the Marlins off the bases.

Zimmerman has been the face of the Nationals' franchise in his previous eight major league seasons. He's been the best player the team has had. But the torch seems to have been passed. Maybe it happened last year when Harper won the National League Rookie of the Year award. It may well have occurred in Monday's season opener when Harper asserted himself as the Nats' offensive star.

Everything seems to be falling into place for Harper to take his place as the Nationals' cornerstone player, the one who seems most capable of carrying his team to fulfill the massive expectations set before it.

Spring training stats can be dismissed, but the numbers Harper put up during Grapefruit League play were notable. He wasn't there to just "work on things," find his timing, get his legs under him and all the other platitudes associated with preseason baseball. Harper hit like someone ready to show that his Rookie of the Year performance was simply the beginning of what's to come.

In 72 plate appearances, the Nats' left fielder compiled a triple-slash average of .478/.500/.716 with five doubles, three homers and 15 RBI. His 1.216 OPS was easily the highest among Washington's regular players and that .478 batting average led all MLB players during the spring.

More often than not, Harper likely wasn't facing top-notch pitching. Maybe he faced a major league quality starter once a game. That's why spring training offensive stats have to be viewed suspiciously. But Harper still batted almost .500, even if it was against subpar competition most of the time. 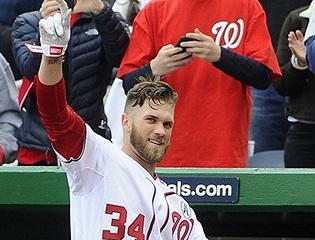 That's not a player who came into spring training entitled, as if he'd conquered the game by winning NL Rookie of the Year. Besides, we all know Harper wasn't the best rookie in MLB last year. That was Mike Trout. An argument could also have been made for Arizona Diamondbacks pitcher Wade Miley — who went 16-11 with a 3.33 ERA and nearly pitched 200 innings — to win top rookie honors in the NL.

Yet Harper came on strong in September while the Nationals were racing toward their first NL East title. He batted .330 with a 1.043 OPS for the month. That included eight doubles, seven home runs, 14 RBI and five stolen bases. Though many felt like Harper won NL Rookie of the Year due to hype, his late-season surge justified the honor for him.

Again, it's very early — both in terms of the Nationals' season and Harper's career.

However, Harper looks to have carried his performance from the end of last season and this year's spring training into the 2013 season. (The rookie did hit only .130 in the playoffs last year, but he is hardly the first player to be humbled by postseason baseball. Five games also doesn't provide much of a sample to judge.)

After his second home run on Monday, some fans at Nationals Park were chanting "M-V-P!" according to Adam Kilgore of the Washington Post. Though that was surely somewhat tongue-in-cheek from a fanbase that knows there is a whole lot more baseball to be played, the possibility doesn't seem entirely crazy.

Can Harper really do this? It's too much to expect too soon, right?

But two of Sports Illustrated's MLB experts picked Harper to win National League MVP in their preseason predictions. They expect him to be the best player on the best team, which — sabermetrics be damned — is typically the determining factor among a majority of MVP voters. Players who compile the numbers that Harper put up as a 19-year-old usually go on to have outstanding careers. That often begins the next season as a 20-year-old.

Nationals manager Davey Johnson certainly seems to think Harper is ready to shoulder the responsibility. He's batting third in Washington's lineup, typically the spot where a team's best hitter bats. Previously, that spot belonged to Zimmerman. But like most everything else during Harper's amateur and professional baseball career, Zimmerman has had to step out of the way for progress — and the future.