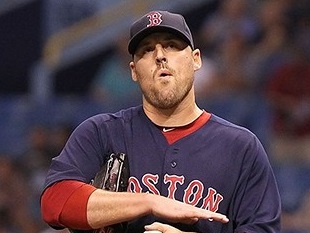 John Lackey hasn't gotten much good news during his three years with the Boston Red Sox.

After missing the entire 2012 season following Tommy John surgery, the 34-year-old right-hander was slated to be the Red Sox's fifth starting pitcher.  Lackey didn't have the best spring training, but with a healthy, surgically repaired elbow, the hope was that he could give Boston 175 to 200 innings at the back end of its rotation.

Making his season debut last Saturday versus the Toronto Blue Jays, Lackey initially looked strong, allowing no runs and three hits in his first three innings. In the fourth, however, he served up a two-run homer to J.P. Arencibia, putting the Red Sox behind 2-0.

Lackey struck out Emilio Bonifacio to begin the fifth inning. But after throwing a 2-2 pitch to Jose Reyes that ran far inside and nearly hit the Blue Jays shortstop, Lackey grabbed his arm in pain. He staggered off the mound with his right arm hanging at his side.

As he rubbed his bicep, trying to alleviate the pain, Lackey had to wonder if his Red Sox career is cursed. For whatever reason, maybe he just wasn't meant to succeed in Boston. He wasn't pitching well. Personal issues plagued him off the field.

The pitching mound was presumably supposed to be an escape, where Lackey could get away from the voracious Boston media and forget about the problems he dealt with at home. Yet that had become a nightmare scenario as well, as Lackey looked nothing like the pitcher he was in eight seasons with the then-Anaheim Angels.

Lackey was hardly living up to the five-year, $82.5 million contract he signed with the Red Sox in December 2010, compiling a 26-23 record and a 5.26 ERA during in his first two seasons.

Making him even less popular with fans was being part of the fried chicken and beer clubhouse escapades during the team's September collapse in 2011. His 12-12 record and 6.41 ERA already had Boston fans ready to run him out of town.

But an elbow that required reconstructive surgery went some way toward explaining Lackey's struggles. Was he pitching injured during those first two seasons in Boston? All signs seemed to indicate that he was.

Lackey went on the disabled list in May 2011 with an elbow strain. The elbow apparently continued to be sore throughout the rest of the season. A postseason follow-up exam revealed the damage that necessitated surgery.

This season was supposed to be a fresh start for Lackey. His elbow was healthy. He could show Boston fans — and observers throughout baseball — that he was still capable of being an effective MLB pitcher. Starting pitching could give the Red Sox an edge over their AL East competition. Lackey could be a big part of that.

The injury Lackey suffered in Toronto casts those ambitions in doubt, of course. Can he make it through the season with that reconstructed elbow? Will he make a meaningful contribution to this Red Sox team?

Yet maybe there's some good fortune possible for Lackey in Boston, after all. Well, relatively speaking. Lackey did get hurt and had to be pulled from that start versus the Blue Jays. But a subsequent MRI exam revealed no tear in his biceps, which has to be considered good news, given how badly it appeared that Lackey injured his arm.

Lackey will almost certainly miss his next start, scheduled for Friday against the Tampa Bay Rays. He could still end up on the disabled list, depending on whether or not he's able to pitch after skipping his next turn in the rotation.

An off-day on Tuesday allows the Red Sox to get by without a fifth starter until Sunday. It seems unlikely that Lackey could pitch by then, but perhaps an extra two days of rest will provide enough recovery time. According to ESPN Boston, Red Sox manager John Farrell said Alfredo Aceves would get the start if Lackey can't go.

Lackey was in need of any good news. He's experienced little to none during his time in Boston. So not suffering a season-ending injury (as far as we know) probably qualifies. That's how bad Lackey's Red Sox career has been to this point.

The length of the baseball season gives Lackey plenty of time to recover. For the Red Sox to have a successful season, they'll need Lackey in their rotation. Maybe a happy ending is still possible for him. He's certainly due for something to go right.