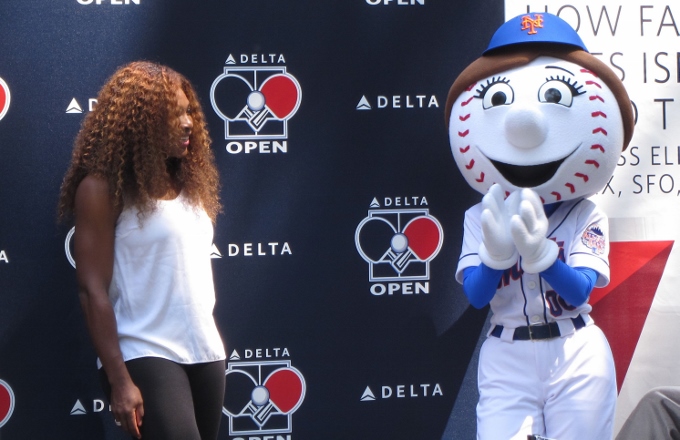 Less than a week before the U.S. Open starts at the USTA National Tennis Center in Flushing, NY on August 26 and it appears we may have a surprise threat to Serena Williams, the defending women’s champion and the top-ranked female tennis player in the world. Is it Maria “I’m not really changing my name to Sugarpova that was just a joke” Sharapova? Or Victoria Azarenka? No, it’s Mrs. Met, who has emerged over the past few months as the team’s latest sensation — with apologies to All-Star Matt Harvey — since her return to public life alongside Mr. Met earlier this season after an eight-year absence.

Making a rare public appearance — Mrs. Met is recently back from maternity leave — at the Delta Open, the wife of longtime Mets mascot Mr. Met participated in the first annual round-robin tennis table tennis tournament in Madison Square Park in New York City on Wednesday afternoon. Mr. Met was unable to attend due to a conflict with the team’s home game at Citi Field against the Atlanta Braves.

Mrs. Met competed against and alongside other New York sports luminaries including New York Rangers’ goalie Henrik Lundqvist, New York Yankees’ outfielder Brett Gardner, New York Knicks’ Iman Shumpert and of course the reigning U.S. Open champion, Serena Williams. (Delta is the Official Airline of the Rangers, Knicks, Yankees and Mets. The celebrity tournament was part of a day-long event including table tennis tournaments open to the public as well as giveaways sponsored by Delta).

At first, Williams’ hard court tennis skills seemed to translate seamlessly to the smaller hard courts of table tennis. The 16-time Grand Slam champion showed off her table tennis chops by soundly defeated Brett Gardner and Henrik Lundqvist. Serena was both the referee and official scorer for the matches. Finally, it was time for the marquee matchup between the two Queens of Queens — Mrs. Met and Serena.

In a hard-fought and hotly contest match, Mrs. Met’s change of pace and slower game caught Williams off-guard, resulting in a stunning upset. Mrs. Met had miraculously pulled off an 11-5 win. As Mets fans know well, ya gotta believe!

“Well she definitely had a slower pace,” Williams said after the match against Mrs. Met. “She hit hard at first and then she hit soft. She definitely mixed it up. But she was super hot.”

When asked about how Mrs. Met overcame a bit of handicap due to her larger hand size and puffy white gloves, Serena admitted that she used that a bit to her advantage, even in defeat.

It appeared that this intrepid writer and mascot fan might have the opportunity to actually face off against Mrs. Met, but she had to hurry back to Flushing. As my friend @metschick on Twitter observed, Mr. Met expects dinner on the table when he gets home.