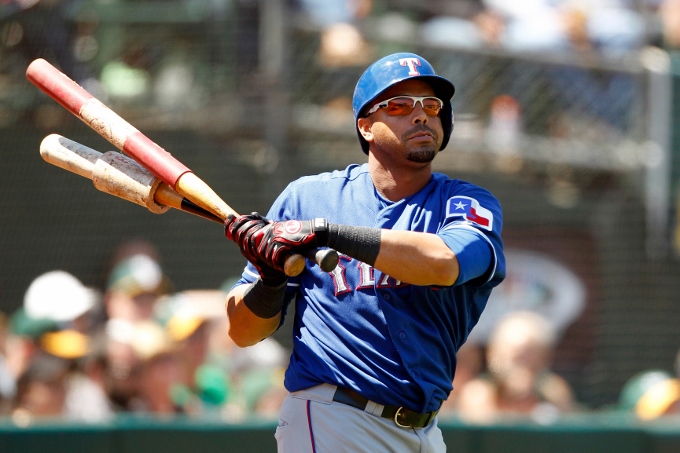 That sound you hurt was the wind going out of the sails of people who wanted some sort of major splash with these suspensions. The three additional players that were rumored to be suspended yesterday came out as Bastardo, Valdespin, and Escalona, with only Bastardo holding a role in the majors right now. Bartolo Colon, Melky Cabrera, and Yasmani Grandal all got free passes due to their suspensions last season, and the beltway duo of Danny Valencia and Gio Gonzalez were cleared of any wrongdoing.

The big names are Cruz and Peralta, who are not coincidentally the only players involved in a playoff race right now. The 33-year old Cruz is a free agent at the end of the season, and has an .841 OPS and 27 homers for the Rangers this year. Texas was unable to find a replacement for Cruz at the trade deadline, meaning they're going to have to get creative in filling his role in the lineup and that Ron Washington might have to bite the bullet and start playing Jurickson Profar in the outfield more often. The Tigers planned ahead for Peralta's suspension at the deadline, injecting themselves into a three-way trade with the White Sox and Red Sox to pry slick fielding shortstop Jose Iglesias from Boston's grasp. The 31-year old Peralta is also a free agent after this season, and while Iglesias won't be able to replicate his .822 OPS in the guts of Detroit's lineup, Iglesias' glove has already been a more than welcome addition.

At the end of the day, the Biogenesis suspensions reminded me a lot of the Mitchell Report. Sure, you had a couple of big names (Braun, Rodriguez), and a couple of mid-level players (Cabrera, Cruz, Peralta), but three-quarters of the players named were of the David Segui (or lesser) mold. Three of the players are on the minor league DL, three are in the minor leagues, one doesn't have a job, one is a reliever, and one is on the major league DL. The six month witch hunt is over, and all it's accomplished is furthering MLB's vendettas against Rodriguez and Braun, suspending a handful of players who had little to no major league impact this season, and slightly damaged a couple of potential playoff teams. The oncoming Armageddon instead just took out a couple of trees, and now you've got a bunker full of canned food and bottled water and no idea what to do going forward.