The price for starting pitching has gone through the roof this winter, and the top tier options haven't even signed. With the uncertainty surrounding Masahiro Tanaka's posting, guys like Matt Garza, Ubaldo Jimenez, and Ervin Santana have been in a holding pattern. That's led to middle and back-end rotation options getting more money than you'd expect – four years and $32 million for Jason Vargas? Three years and $30 million for Scott Feldman? Three years and $24 million for Phil Hughes?

Lesser pitchers have also been getting paid, largely on one-year, incentive-laden contracts. In fact, over the past week or two, a number of these deals have been signed. The only ones we really talked about in-depth were Josh Johnson's $8 million pact with the Padres, Hiroki Kuroda's $16 million deal with the Yankees, and Dan Haren's $10 million contract with the Dodgers, so I thought it would be nice to throw some of the lesser ones together in one big post and try to determine which one-year contract for a starting pitcher will work out best in 2014. 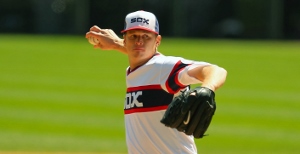 Gavin Floyd. $4 million from Braves.
Floyd was primed to cash in this winter after the White Sox extended a $9.5 million club option on him for the 2013 season. But Floyd blew his elbow out after just five starts in 2013, and his earning potential went out the window along with it.  Floyd took a one-year, incentive-heavy deal with a Braves team that won't be counting on him to lead their rotation, but he'll be the most veteran pitcher on their staff by far. Floyd had been a consistently solid pitcher leading into 2013, when the injury derailed his year. When healthy, Floyd is a guy who limits his walks, keeps the ball on the ground, and gets his share of strikeouts. Moving from US Cellular Field to Turner Field should also help Floyd out, and 20-25 starts of 4.00 ERA ball would be just what the Braves need at the back of their rotation.

Dan Haren. $10 million from Dodgers.
We talked about his contract already, but here it is in a nutshell – Haren was really good in the second half of 2013, striking out 70 and walking just 14 in 76 2/3 innings. Haren got smashed at Nationals Park by right-handers, and Dodger Stadium is much more favorable to pitchers facing righties than Nationals Park. This could be the steal of the winter.

Roberto Hernandez. $4.5 million from Phillies.
The former Fausto Carmona is staying in the east, but moving north from Tampa to Philadelphia. Hernandez was a complete disaster in 2013, eventually losing his job in the Rays rotation and getting forced to the bullpen. Hernandez has a ground ball heavy approach, but still allowed a whopping 24 homers last year. While his 20.9% HR/FB is way too high to be sustained next year, Hernandez *did* pitch better at Tropicana Field than on the road – and he's heading to a vastly superior park for hitters in Citizens Bank Park. Even with just some better luck, Hernandez could be a fine back-end option for the Phillies, but there is some definite disaster potential as well.

Josh Johnson. $8 million from Padres.
Another one we talked about already, Johnson probably carries both the highest risk and highest reward of any player we're talking about today. Like Haren, he'll greatly improve from moving to a pitchers park, but moreso, considering how extreme Rogers Centre and Petco Park are on the spectrum of ballparks. But Johnson's injury issues last year weren't just a blip on the radar like with Floyd – he's thrown 200 innings in a season just once, and has only crossed 180 innings two other times, including only once in the last three years. When healthy, he's a dominant, top of the rotation force. The problem is, he's rarely healthy.

Hiroki Kuroda. $16 million from Yankees.
The 39-year old Kuroda just keeps on ticking. His career-worst ERA as a major leaguer is 3.76, and he's crossed the 30 start mark five times in his six seasons in MLB. But age is an issue with Kuroda, as he'll be 39 on Opening Day. Kuroda also tired in the second half, posting a 5.40 ERA in ten starts over August and September. If he rebounds and pitches like he has over his entire career, Kuroda will easily earn that salary. If not, the Yankees will be in some real trouble with their rotation.

Colby Lewis. Minor league deal, $2 million in majors from Rangers.
I love minor league deals, and Lewis' contract has virtually no risk for Texas. But a poor spring could be the end of the road for the 34-year old Lewis. His 2012 season ended in June following flexor tendon surgery, and he missed all of 2013 while recovering from the surgery. Lewis also had hip surgery in August, something you never want to see. Before the surgery in 2012, Lewis was on pace for a career-best season, and that potential keeps Texas salivating. The Rangers aren't as awash in starting pitching as they have been in recent years, and Lewis could end up being a huge part of their club in 2014 – if he's healthy and ready to go.

Shaun Marcum. Minor league deal, $1 million in majors from Indians.
Despite his 1-10 record and 5.29 ERA, Shaun Marcum was actually pretty solid for the Mets in his 12 starts (and two relief appearances). In 78 1/3 innings, he struck out 60, walked 21, and posted a career-low 0.80 home run rate. So, what happened? Marcum was destroyed by a .322 BABIP and 61.9% strand rate. Among all starting pitchers with at least 60 innings thrown, Marcum's strand rate was the worst, and his BABIP was among the 20 worst in baseball. But of course, that doesn't mean that he'll be good in 2014 – he had surgery for thoracic outlet syndrome in July, and that's not exactly a routine procedure. I mean, Chris Carpenter had the surgery in July of 2012, and made just six more starts before retiring. If he does rebound from the surgery, Marcum could be a nice option for the Indians – but that's a big if. 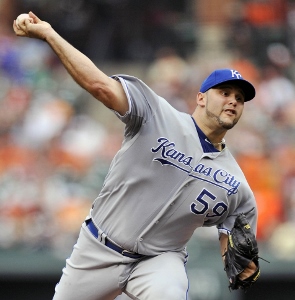 Felipe Paulino. $1.75 million from White Sox.
The 30-year old Paulino is a year and half out for Tommy John surgery, but didn't throw a pitcher in the majors while recovering. He had a minor shoulder surgery in September, but is expected to be ready to roll in the spring. Before the Tommy John surgery in 2012, Paulino was sneaky good with the Royals, pitching to a 1.67 ERA in seven starts while striking out 39 hitters in 37 2/3 innings. He's thrown 100 innings in the majors just once, and might be better suited as a long man in relief for Chicago.

Ryan Vogelsong. $5 million from Giants.
Vogelsong was one of the best stories in baseball in 2011, coming back from Asia and the minor leagues to make 28 starts for the defending World Champions while pitching to a 2.71 ERA. He had another great year in 2012 for San Francisco when they won the World Series again, but fell apart in 2013 while also missing two and a half months due to a broken finger. When he immediately returned in August, he wasn't too bad, but was a disaster in September, walking ten and striking out nine in 26 2/3 innings. Vogelsong is 36, and $5 million seems like a bit of a hefty gamble on a player that age who has had two good seasons in his career.

Edinson Volquez. $5 million from Pirates.
We close with Volquez, one of the more confusing, infuriating pitchers in the game. He's had one good season, his breakout 2008 with the Reds when he struck out 206 hitters in 196 innings and posted a 3.21 ERA. Since then, he's never had an ERA under 4.00 while his walk and strikeout rate have gone in the wrong direction. It's true that Volquez did spend most of his career in a hitters park in Cincinnati, but he's spent the last two years in pitchers parks – specifically Petco Park and Dodger Stadium. His ground ball heavy approach jives with what the Pirates have been building towards, but Volquez isn't nearly as good as A.J. Burnett, who he's expected to replace in the rotation. If he's able to put together a season comparable to Jeff Locke's 1.1 fWAR 2013, the Pirates should be satisfied with that.

Now, the million dollar question: which signings will work out best? I think the safest bets to earn the value of their contracts are Haren and Kuroda, followed by Floyd and then Hernandez. The highest risk on this list belongs to Johnson, Vogelsong and Volquez, while Lewis, Marcum, and Paulino have the least financial and won't cripple their teams if they aren't able to perform at a high level. But with the way contracts have fallen off the rails this winter, I don't necessarily think any of these pitchers are necessarily bad signings.