MLB teams don’t get a do-over after the All-Star break. Yet several clubs contending for division titles and playoff spots need turnarounds from a key player or two to improve their chances at the postseason. Just about every contender is in such a position despite disappointing performances from hitters or pitchers that have been major contributors in the past.

Among the division leaders and wild-card hopefuls in both leagues, here are 13 players that will need to rebound from slumping and injury-plagued seasons to keep their clubs in contention during the second half of the season. Without these guys making an impact, baseball might not be very meaningful in September, let alone October.

Bryce Harper
The Nationals left fielder was limited to only 34 games in the first half due to a torn ligament in his thumb. Prior to his injury, Harper was hitting .289, but not for much power. As could be expected, the 21-year-old has struggled since returning. He won’t find the timing of his swing back without getting plate appearances.

Yet Harper’s return is somewhat disruptive, as the Nats were playing well in his absence with Ryan Zimmerman in left field, Anthony Rendon at third base and Danny Espinosa at second. Harper needs to be in the lineup, and Washington is surely a better team with him on the field. But if he doesn’t begin to hit, some might wonder if the team is better off with the lineup that was winning while he was sidelined. 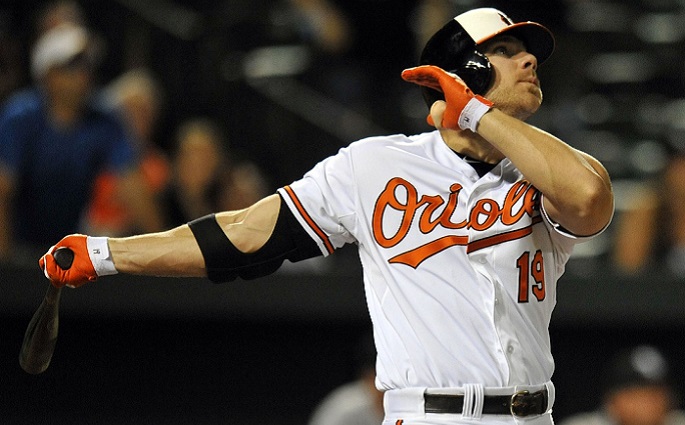 Chris Davis
Perhaps the most surprising aspect of the Orioles’ first-half success is that it occurred despite Davis hitting .199 with a .701 OPS. Nelson Cruz replaced most of Davis’ missing production, and Baltimore needs to address its starting pitching at the trade deadline. But the O’s could put some distance between themselves and their AL East competition if Davis puts up the MVP-caliber numbers he had the past two seasons.

An oblique injury suffered early in the season surely contributed to Davis’ difficulties. But as ESPN.com’s Justin Havens points out, the O’s first baseman has also struggled to hit off-speed pitches and pitches on the outside part of the strike zone. His .252 BABIP would seem to indicate a second-half rebound is looming, but Davis also needs to figure out how to attack the pitches he crushed during the past two years.

Hanley Ramirez
The Dodgers have found some stability in their outfield with Matt Kemp, Andre Ethier and Yasiel Puig settling in as the starting trio. But the left side of the infield looks uncertain with Ramirez fighting a shoulder injury. Can the Dodgers hold off the Giants in the NL West and make a postseason impact with Miguel Rojas at shortstop and Juan Uribe at third base?

Despite his shoulder issues, Ramirez has been one of the Dodgers’ most productive hitters when healthy, batting .275 with an .836 OPS, 11 home runs and 48 RBI. That’s compensated for him being the worst defensive shortstop in the NL, according to FanGraphs’ Ultimate Zone Rating, costing the Dodgers nine runs more than the average player at his position. If the shoulder continues being a problem, GM Ned Colletti will have to find a replacement at the trade deadline. 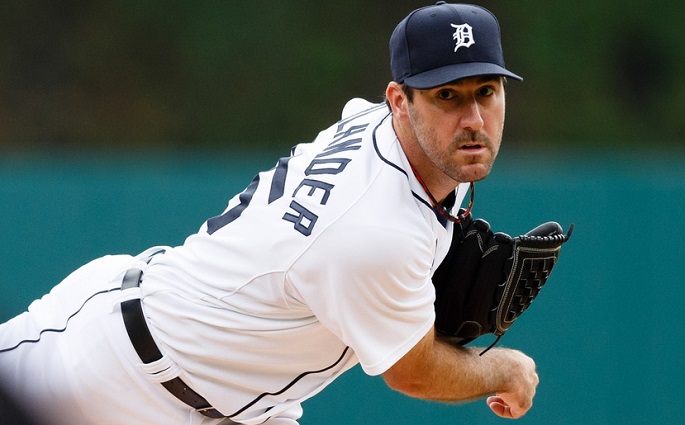 Justin Verlander
The Tigers have established a relatively comfortable 6.5-game lead over the Royals in the AL Central. But can they make another postseason run with Verlander pitching more like a fifth starter, rather than a dominant ace? Not only did Verlander compile an 8-8 record and 4.88 ERA in the first half, but his velocity was down and his strikeout rate dove from 8.9 per nine innings last year to 6.7 this season.

Perhaps offseason core muscle surgery set Verlander further back than we realized. Not having a full offseason to recover may have affected his velocity and mechanics. With their division lead and the success of Max Scherzer, Rick Porcello and Anibal Sanchez, the Tigers can move Verlander back in their rotation and use the second half to get him right. But for Detroit to meet expectations, he needs to be an ace again.

Yovani Gallardo
Can it be a coincidence that the Brewers have played at their best while Gallardo has pitched well? The two aren’t entirely connected, but Milwaukee was 19-8 in April as the right-hander compiled a 2-0 record and 1.91 ERA. During the Brewers’ 18-10 June, Gallardo posted a 3.41 ERA with 34 strikeouts and seven walks in 37 innings.

The 28-year-old doesn’t have to be the No. 1 guy with Kyle Lohse and Matt Garza topping the rotation. But the Brewers are obviously a much better team when he’s pitching at a high level. Gallardo is probably the most talented pitcher in Milwaukee’s rotation and his success will likely be the difference in beating out the Cardinals, Reds and Pirates in the NL Central or possibly winning a wild-card bid.

R.A. Dickey
Acquiring another top starting pitcher could determine whether or not the Blue Jays win the AL East. But if GM Alex Anthopoulos can’t upgrade the rotation, Dickey needs to pitch like the No. 1 starter Toronto thought it was getting when trading for him before last season. Advanced metrics suggest Dickey has been helped greatly by his defense, but that’s always been the case to some extent.

Fortunately for the Jays, the 39-year-old knuckleballer has pitched more like a top starter in his three July starts. Facing the A’s, Angels and Rays, Dickey allowed four runs and 15 hits over 21 innings, while also notching 16 strikeouts versus nine walks. If Dickey can cut down his walks while boosting his strikeouts, perhaps the Jays can concentrate more on upgrading their infield at the trade deadline. But is that asking too much of him? 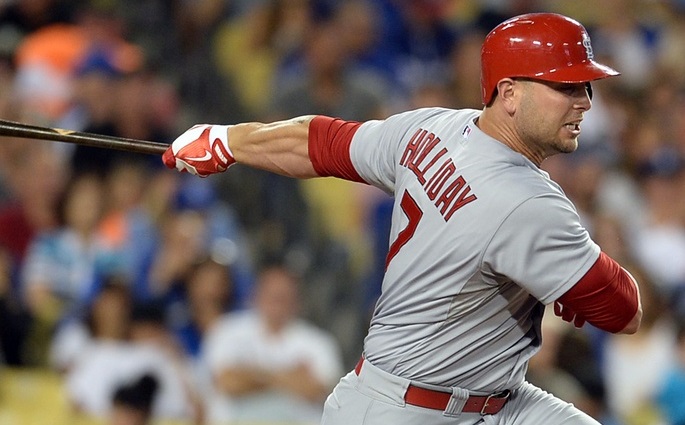 Matt Holliday
With a power outage throughout the Cardinals lineup this season, perhaps it’s a bit unfair to single Holliday out. But to get only six home runs and a .389 slugging percentage from him in the first half is certainly a major factor in why St. Louis is second-to-last in the NL in runs scored. If it maintains through the rest of the season, Holliday’s current .124 ISO would easily be the lowest of his career.

He’s not hitting more groundballs or fewer line drives. But his flyballs just aren’t going over the wall. Maybe this is a natural decline, with Holliday wearing down in his 11th MLB season. Or perhaps he’s dealing with an injury (such as the sore knee that’s plagued him recently) that’s preventing him from driving the ball. Holliday has shown signs of a turnaround in July, slugging .425 with an .821 OPS. The Cards have to hope that continues after the All-Star break.

Eric Hosmer
The Royals ended the first half ranked 10th in the AL in runs scored. Can Kansas City stay in the AL Central and wild-card races with such an ineffective offense? It seems unlikely. The storyline hasn’t really changed throughout the season, and this goes back to last year. The Royals need their young first baseman and third baseman to be impact run-producers.

Perhaps Mike Moustakas is a lost cause — at least for this season. But Hosmer still has a chance to a significant middle-of-the-order presence for this lineup. His July performance has to be encouraging for the Royals. In 54 plate appearances, Hosmer is batting .426 with an 1.150 OPS. That hasn’t coincided with the team winning because Kansas City’s pitching has struggled during that span. But if he’s still hitting and the pitching turns around, this should be a playoff club.

Corey Hart
A hamstring injury limited Hart to 45 games in the first half. But even before he was hurt, Hart was posting a .339 slugging percentage and .125 ISO — both career lows. Decreased power numbers had to be expected in moving to Safeco Field, but a Mariners lineup starved for right-handed power needs Hart to find his slugger’s swing.

Part of the problem might be that Hart is hitting fewer line drives (16.8 percent) than he has in his career and his flyball rate (43.5 percent) has seemed to increase because of it. That might help explain his .214 batting average too. But maybe Hart is still trying to get his legs back after missing all of last year due to knee surgery. If he can do so during the second half, Seattle’s playoff drive would surely benefit. 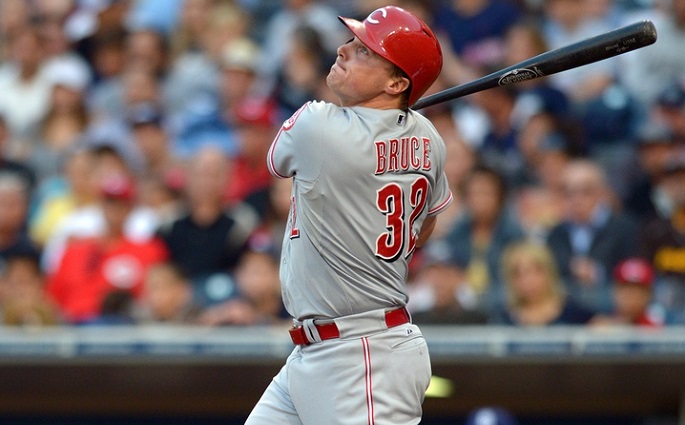 Jay Bruce
With 10 home runs and a .409 slugging percentage at the All-Star break, the Reds right fielder is on pace for his lowest totals in those categories over his past three seasons. Judging from his .179 ISO and .287 BABIP, Bruce would seem due for a second-half turnaround. The Reds certainly needs him to find his power, as he’s the only left-handed home run threat in their lineup.

After a strong June, Bruce’s performance has cratered in July. A career-high groundball percentage (44.2 percent) would seem to indicate he’s not lifting the ball enough. Perhaps he’s still trying to incorporate his legs into his swing after having surgery in early May to repair a torn meniscus in his left knee.

Josh Hamilton
Declining power has been a prevalent theme in this post, and Hamilton is no exception. The Angels left fielder played in only 46 games because of a torn thumb ligament, but wasn’t hitting for much power before he got hurt. Yet the team has to be encouraged by Hamilton’s .295 batting average, in addition to increased on-base (.373) and slugging (.449) percentages.

Is this just a case of Hamilton making contact and putting the ball in play, yet just doesn’t seem to be launching the ball over the fence? There are no drastic changes in his flyball rate and his line-drive rate is actually increased compared to last year. So perhaps Hamilton just needs to lift more of the balls he’s making contact with, especially when he’s playing away from Angel Stadium (where all of his home runs have been hit this season).

Matt Cain
One of the more curious aspects of the Giants’ largely successful first half is that their presumed best starting pitcher had very little to do with it. Cain went 2-7 with a 4.18 ERA in the first half, the worst among San Francisco starters. Going on the disabled list twice already this season — due to a lacerated finger and hamstring strain — hasn’t helped Cain find any consistency and may have prevented him from building enough stamina to throw his typical workload.

Giants manager Bruce Bochy announced that Cain will be the team’s fifth starter to begin the second half. That may give him the opportunity to rest more and get some extra bullpen work in. But it’s difficult to imagine the Giants staying with the Dodgers unless Cain pitches to his capability after the All-Star break.

Francisco Liriano
Is it too easy to say that Liriano’s absence from the Pirates starting rotation is the main reason why this team has a worse record than it did a year ago? Probably. But Liriano was one of the best pitchers in the NL last year and very few clubs could afford to lose that kind of production.

An oblique injury limited the left-hander to 15 starts in the first half, but his walk rate and hits allowed per nine innings both increased from last season. Getting poor run support from his lineup isn’t helping either. Throwing his slider and changeup for strikes and issuing fewer walks will likely mean more second-half success for Liriano. The time off due to injury may have helped him refine those pitches. The Pirates are certainly hoping so, as they need their No. 1 starter back for a repeat playoff run.