Andrew Friedman and his Los Angeles Dodgers continued to wheel and deal as the Winter Meetings came to a close, finishing off a day full of trades by acquiring second baseman Howie Kendrick from the Los Angeles Angels for the recently acquired Andrew Heaney.

After trading Dee Gordon and Dan Haren to the Miami Marlins for a group of prospects highlighted by Heaney, Friedman obviously had a replacement lined up once the trade was made, as the trend of one deal leading to another continues this offseason. By flipping Heaney to the Angels for Kendrick, the Dodgers have a new double play combo that can pair up at the top of the order after the acquisition of Jimmy Rollins earlier on Wednesday.

After his breakout campaign in 2011, Kendrick regressed to be a slightly-above average keystoner for the next two years before having a great 2014. He had a triple-slash of .293/.347/.397 with seven home runs and a wRC+ of 115. The biggest cause for his success was his walk rate, which was the highest of his career at 7.1%. He also played his usual good defense, which ended up being good for 4.6 fWAR, which was tied for fifth-best amongst second basemen in the Majors.

Friedman made it known that he prioritized on-base percentage with his players, and even though Gordon was an All-Star and had speed to burn, he didn’t fit the profile Friedman wanted. He’ll most likely bat second for the Dodgers come 2015.

Heaney wasn’t a Dodger for long, but he did take it in stride: 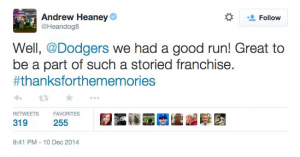 The Angels have to be happy adding a young arm like Heaney to their rotation. With the breakout season for Garrett Richards and the promise of Matt Shoemaker and Tyler Skaggs, Heaney will definitely have a shot to earn a spot in the Angels starting rotation. The former first-rounder was the #1 prospect for the Marlins via Baseball America.

This will most likely end the trades at the Winter Meetings, but the Dodgers are still looking for help as far as starting pitchers are concerned. The next shoe to drop will most likely be Matt Kemp, with multiple reports saying the Padres are the favorites to land the All-Star outfielder.