With the season two months in, the talk of small sample sizes have shifted to the back of discussions for the most part. Trends can tell us who is completely out of the race at this point (Yo! Philly!), who has been ravaged by injuries to the point where they have no shot of contending (Poor, poor Rays) and who might be better than expected (Kudos, Milwaukee. Enjoy my favorite Milwaukee-based movie clip ever.)

But man alive are the San Francisco Giants another story altogether. Coming into Monday’s series against the Washington Nationals, the Giants are 42-21, good for a .667 winning percentage and a 108-win pace. Heading into the season, questions abound about whether the team had enough offense to compete with the Dodgers and whether or not the aging pitching staff was going to be able to keep pace throughout a long season.

Instead, the Giants look like the most balanced team in all of baseball. From 1-25, the brain trust led by GM Brian Sabean and manager Bruce Bochy have built a roster that has emphasized maximum usage of all its parts. It’s no secret that Bochy has become well-beloved over the years, being upfront with his players and making sure they understand their roles. And Sabean’s the longest-tenured GM in baseball for a reason, even with him missing on free-agent signings and trades before the team’s recent run of success.

But the more time goes by, the more this team looks like a perfect storm of everything the team has looked for over the last few years that has made them successful. First, a look at the offense. 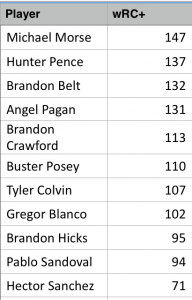 If you’ve seen my articles before, wRC+ is one of my favorite stats. It allows you to see offensive production in a balanced environment based on the position they play and field . A 100 wRC+ is considered league average. Look at that list. That’s EIGHT players who are least league-average offensive players. That doesn’t mean replacement level, folks. That is a team that fields a starting line-up with nothing but good Major League hitters. That is scary to see. And look at Hicks and Sandoval, with Sandoval obviously on the upswing and Hicks being a bargain to say the least. 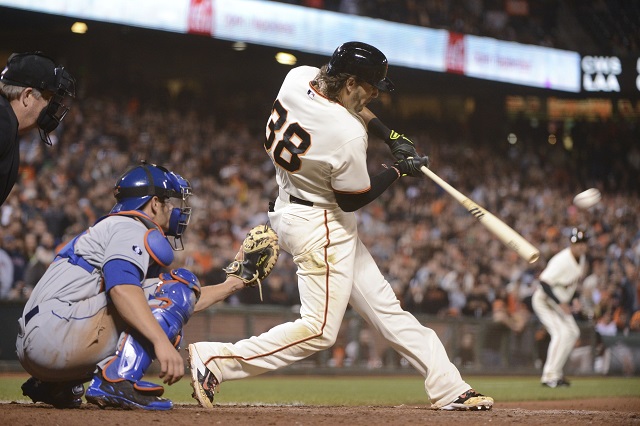 The other stats are obviously great, too. Morse is starting to look like the bargain of the winter, with 13 homers and a .879 OPS. Pence is on his way to a 20-20 season yet again. Angel Pagan is looking like the prototypical leadoff man with a .323/.373/.433 line. The defense isn’t great for many of these players, but the offensive output outweighs it. One more thing to look at. 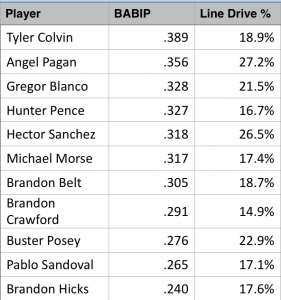 BABIP has become an en vogue advanced stat, mainly because it’s funny to say and like the other triple slash stats, it has three digits after a decimal. A .300 BABIP (or thereabouts) is typically the league average. Line Drive percentages are typically around 20%. Line drives lead to the highest amount of hits, and while there are some players who have high BABIPs, a lot of that is due to high line-drive percentages. Adding line drive percentages to the equation tells you more about whether or not a player with a high BABIP is considered lucky.

As you can see, Posey can definitely blame his early struggles on batted ball luck. Meanwhile, guys like Pagan and Blanco continue to rake thanks to their sky-high line drive rates. The guys in-between all have one thing in common: Power.

The team has hit 69 homers, second in the National League only to Colorado (who are normally in this vicinity). Playing at AT&T Park, the Giants shouldn’t be seeing this type of power output on the regular, but Morse’s prodigious power, along with normal 20-HR guys in Pence, Belt, Posey and Sandoval, have helped turned around a team that was desperate for an offensive boost this year. Add in guys like Hicks and the suddenly powerful Crawford and this team rarely misses a beat with the long ball. 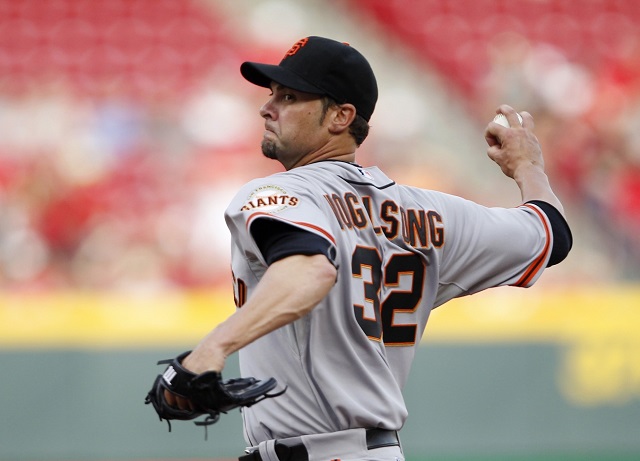 It’s fair to say the offense is the only reason, but the pitching has held up its end of the bargain. Madison Bumgarner’s 10 K/9 speaks for itself, as does Tim Hudson’s ridiculous 58.2% ground ball rate. Matt Cain is turning it around. But the key has been Ryan Vogelsong.

His 3.39 ERA is a bit lower than his xFIP of 4.02, but thanks to an uptick in his strikeout rate by two per nine innings after last year (5.8 to 7.8, which he attributed to a change in how he mixes pitches), Vogelsong is starting to look once again like a bargain, and worth even more than the $5 million salary he garners this year.

Even with Tim Lincecum having issues as the team’s statistical fifth starter, he’s still striking out a batter an inning and his fielding independent numbers are better than his ERA. There’s room for improvement there, and there needs to be lest Lincecum becomes the newest member of the Barry Zito Club For Pitchers Who Don’t Pitch Well Considering His Salary. 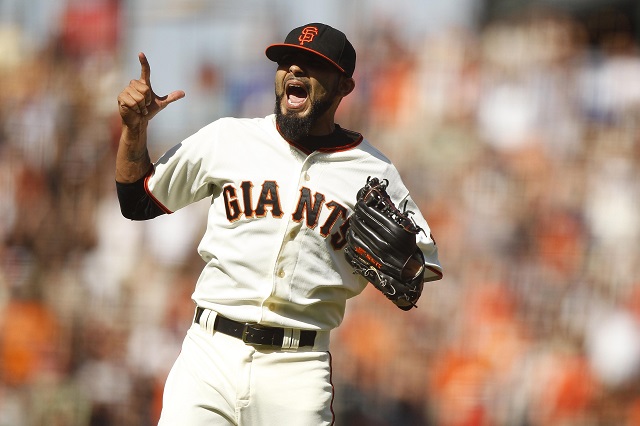 On top of the solid starting pitching, the Giants have seen their bullpen return to an elite level. Save for the recently DFAed David Huff, each member of the pen has been perfect in his role, as their 2.39 ERA is good for second in all of baseball the team they host this week, Washington. Batters are hitting only .211 against them, they have a 3/1 K/BB ratio and they get 1.45 groundouts per flyout, the fourth highest total in the Majors.

And with all 25 players working in unison, the well-oiled machine will be primed for a tune-up come Trade Deadline time. The team has players to give up in case a trade is needed, whether it’s for an arm to supplant Lincecum in the rotation or a bat to be a bit more productive at second base. On top of that, the Giants have players at Triple-A who can come up to fill those roles should the need arise, with top prospect Joe Panik doing his best Scutaro impression in Fresno to the tune of .320/.382/.443.

So how did the Giants do it? Well, while cluster luck can be considered one of the reasons why, the reason why that cluster luck exists is because the team has provided output from multiple contributors. If Posey and Sandoval get off to rocky starts, Morse and Pence are there to pick them up. Cain gets hurt? Yusimeiro Petit steps in to play stopgap. Casilla gets injured? Jean Machi and the forkball better than even Koji Uehara steps in to play setup man.

Never considered a sabermetric-friendly club, perhaps the strength of the Giants as an organization is to determine value in as many ways as possible before making a decision, and making sure they have a backup plan just in case. There’s still roughly 100 games left in the season, but no team in baseball has it better than the Giants right now.