At this point, the formula for building a perennial contender on a small-market budget is well-established: build around a strong core of young players and have a continuous supply of talent coming from the minors. That minor league talent can be used in any of a number of ways; it can supplement the big league core and build on it, it can be used to trade for pieces that help complete the puzzle, or it can eventually replace the core as key players grow towards free agency.

When you lay a model out like that most baseball fans think of the Rays, but most people forget that the Brewers. In 2007, they won 83 games with a 23-year old Prince Fielder in second full season and rookies named Ryan Braun and Yovani Gallardo. In 2008, they made the playoffs for the first time since 1982. When they didn’t make the playoffs in 2009 or 2010, though, they emptied the cupboard to trade for Zack Greinke and Shaun Marcum. That brought them an NL Central title and an NLCS berth, though they lost there in six games to the Cardinals.

The trades emptied the cabinet too much, though. Prince Fielder left after the NLCS for Detroit via free agency, Marcum was a disaster in 2012, and Greinke was traded to the Angels by the trade deadline. The Brewers won 83 games in 2012 and finished well out of contention. 2013 was worse; Ryan Braun’s steroid saga left them with a punchless offense to go with a mediocre pitching staff. The Brewers finished 74-88.

74 wins might not have been the worst of it. When the Top 100 prospect lists started coming out in the early spring, there were hardly any Brewers to be found. Some lists included the Brewers’ Jimmy Nelson (a 24-year old starter in Triple-A) in the second half, some lists had no Brewers at all. Still, the Brewers couldn’t exactly pull up the stakes this winter and start over. Braun is locked up with a long-term contract and the club has a lot of 2014 money tied up in players like Gallardo, Aramis Ramirez, Kyle Lohse, and Rickie Weeks.

To summarize, the Brewers had a team coming off of a bad season, practically no help coming from the minor leagues, and way too much money on the books to back-track. This is not where they were five years ago or three years ago or two years ago, this is where they were on December 1, 2013. The question is easy, how do you go from that to 20-7 in six months? 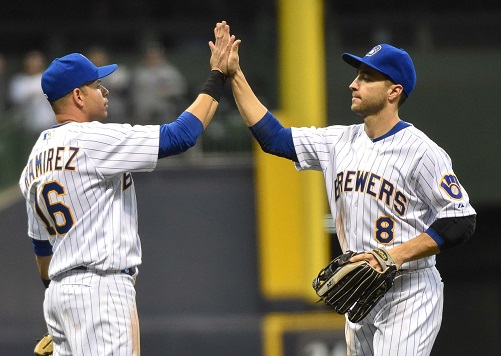 Sometimes, the answer is almost as easy as the question itself. The Brewers looked at the mess they were in and figured they offense would probably be fine with Braun back from his suspension and a healthy Aramis Ramirez. They let Corey Hart walk and plugged Mark Reynolds in to first base as a known-quantity replacement. They liked what they saw from Khris Davis last year, so they traded Nori Aoki to the Royals for relief help in the form of Will Smith. Smith and the revitalized-by-delivery-change Zach Duke give the Brewers two formidable lefties in the bullpen where they had none last year. And they went out and signed Matt Garza to shore up an already-decent rotation. Basically, they trusted the offense to fix itself, they tossed some lefties into the bullpen, and they got themselves a starter. Now it’s April 30th and the Brewers have the best record in baseball.

Really, this configuration is probably only a short-term solution for the Brewers. Ramirez, Weeks, and Gallardo are all in the last guaranteed year of their contracts with various options for 2015. Francisco Rodriguez is going to be a free agent again this winter. Lohse is only signed through 2015. Braun’s mammoth extension kicks in starting next year and his salary jumps from $12 million this year to $19 million.

This super-hot start more or less ensures that the Brewers will be in contention all yea. If you think the Brewers are a .500 team, which most of the projection models still do, this start still makes them the NL Central favorites and it’s already put the division title hopes of the Pirates and Reds into pretty serious jeopardy before May even starts. The question of just how much the Brewers should put into making a serious pennant run this year can be put off for a month or two, but I can tell you now that it’s coming.

It’s true that the Brewers’ depleted farm system and the big turnover looming with the roster is probably going to force them into some serious soul-searching about the long-term direction of the team (obviously they will want to build around Braun, Carlos Gomez, and a few of their young pitchers, but they need to figure out what the best way to do that is). It’s also true that the Brewers aren’t as good as their 20-7 record makes them seem, and that they’re probably going to spend the second half locked in a division battle with the Cardinals. What’s really interesting to me now, though, is that typical “small market” logic probably dictated that the Brewers should’ve ripped their team apart over the winter and tried to re-stock for a better shot at winning in 2015 and beyond, but the Brewers did the exact opposite. They put faith in players that struggled last year, they poured money into free agency, and it sure looks like it’s got a shot to pay off in 2014.

In 2005, I started a WHYGAVS instead of working on organic chemistry homework. Many years later, I've written about baseball and the Pirates for a number of sites all across the internet, but WHYGAVS is still my home. I still haven't finished that O-Chem homework, though.