Let’s get this out of the way first: Million Dollar Arm is not a great baseball movie. If that’s what you’re looking for, you’re likely going to be disappointed.

The posters, trailers and commercials for the film make it pretty clear this is a showcase for Jon Hamm, best known for playing Don Draper on AMC’s Mad Men. (I think he should be most famous for the “Jon Hamm’s John Ham” skit on Saturday Night Live, but that’s just not the world we live in.)

Perhaps the most important question from a movie business standpoint is whether or not Hamm (playing sports agent J.B. Bernstein) can make the transition from TV star and carry a feature film as the lead. But that’s probably a better question for The AP Party. The general moviegoing audience doesn’t care about stuff like that.

People want to be entertained, and Million Dollar Arm accomplishes that. In fact, it probably tries too hard to be a crowd-pleaser and appeal to the widest possible audience. That’s probably not a big surprise, since this is a PG-rated Disney film.

The movie takes great pains to highlight the differences in culture between the United States and India, between Los Angeles and Mumbai. That culture shock also applies to Rinku Singh and Dinesh Patel, the fledgling Indian pitchers taking up baseball for the first time in their lives and attempting to score a major league tryout.

Plenty of gags are derived from the fish-out-of-water circumstances of three people visiting the United States for the first time, struggling with the language barrier and being fascinated (and scared) by modern standards such as elevators and pizza. I thought the coach and translator that comes along with Singh and Patel often comes off as a caricature and virtual cartoon character, but he does provide some necessary comic relief when things get too serious and risk becoming boring.

There’s a scene toward the end of the story that is meant to make your eyes start tearing up. But it might also make some eyes roll. What your eyes do in that moment when the main characters reach an understanding between one another will likely indicate whether or not the movie has won you over. 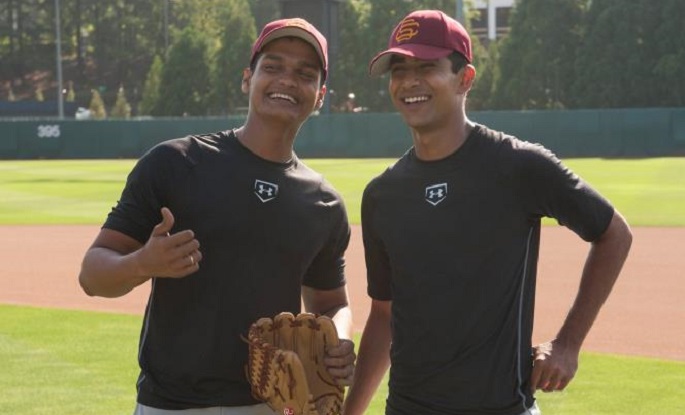 But Million Dollar Arm does provide some tasty baseball content to chew on. (Fans might enjoy cameos of sportswriters such as Ken Rosenthal and Jayson Stark playing scouts during the duo’s showcase.)

What’s particularly interesting and entertaining is watching two people who really have no prior experience with the game. Everything about baseball is foreign to them: How to hold the ball when throwing, the proper pitching motion, how to use a glove. Even a simple game of catch between the two doesn’t come naturally, which provides a far steeper learning curve than everyone involved had anticipated.

Of course, there’s a visual shorthand to showing how Singh and Patel improve as the story progresses. Their wild, errant pitches eventually get thrown accurately for strikes. The two begin to field their position. They just look more comfortable wearing baseball apparel.

As a baseball fan, I would’ve liked to see a bit more on the tutorial side. Baseball fans will likely be familiar with Tom House (played by Bill Paxton), the former major league pitching coach who works at USC and is employed by Bernstein to mold these raw talents into potential prospects. We do see quick glimpses of House tinkering with their mechanics and running one or two of the unusual drills the unconventional coach incorporates in the typical sports movie montage, but I wanted more.

Then again, Million Dollar Arm isn’t truly a baseball movie like The Rookie. Actually, it’s not really even a sports movie like Miracle or Invincible, though it does try to capture the same inspirational, feel-good vibe. That’s because the athletes aren’t the main characters of this story. Bernstein and his struggle to revive his faltering sports agency, along with learning that he can’t focus solely on the business aspect of everything in his life, are the focal point here. 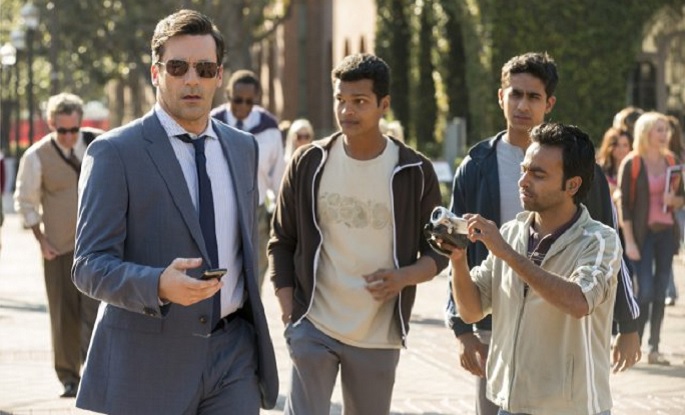 I get that Bernstein represents the audience’s entry into the foreign culture he’s attempting to tap for future clients. I understand this is how these sorts of movies are made. We see India through Bernstein’s eyes — and wince when he’s so preoccupied with finding potential baseball talent that he doesn’t appreciate standing in front of a wonder like the Taj Mahal. Getting Bernstein to a place where he stops to smell the roses is a key story point and a major factor in Hamm’s portrayal of the character.

(My friend Edwin Arnaudin, film critic for the Asheville Citizen-Times, suggested that Matthew McConaughey might have been a better choice to play a fast-talking, charismatic sports agent. While I agree that McConaughey would’ve been great in this role, I do think Hamm playing a guy who’s a bit more obsessed — and repressed — makes his character’s growth a bit more compelling.)

Maybe another problem is that Singh and Patel don’t create a compelling enough story on their own. This isn’t the 1980 U.S. hockey team beating the Russians, Jim Morris running out of the bullpen for the Tampa Bay Devil Rays or Vince Papale taking the field for the Philadelphia Eagles. In this movie, Singh and Patel’s story ends when they get a tryout for major league scouts and a contract from a MLB club. (Spoiler alert?)

That leaves a feeling of “OK, what happened next?” We get an explanation of where Singh and Patel are in their baseball careers just before the closing credits, but it doesn’t feel like enough. (ESPN.com’s Jerry Crasnick picked up where the story left off, but it’s a bit of a buzzkill.)

Ultimately, that’s the issue with Million Dollar Arm. Bernstein’s story isn’t really all that interesting, while Singh and Patel are supposed to be the beginning of something bigger. Yet it all feels more like a game that ended in a tie.