After the Reds traded Mat Latos and Alfredo Simon on Thursday, you might wonder if general manager Walt Jocketty is beginning a rebuilding project in Cincinnati.

At the end of July and when the Reds were officially eliminated from playoff contention, I advocated this team trading off some pieces to get younger and more players under club control, rather than making one last run at an NL Central title or postseason bid and wherever that might lead.

General manager Walt Jocketty didn’t do much at the trade deadline, other than deal reliever Jonathan Broxton to the Brewers. But maybe there was still some hope that the Reds could pull out of their tailspin and make a late run for a wild-card spot. Or perhaps there was also some thought that better trades could be made during the offseason with more time to work out details and a greater number of clubs wanting to make changes to their rosters.

Regardless of the reasoning, the Reds finally got to work on some necessary roster changes during the last day of baseball’s 2014 winter meetings. Simon was traded to the Tigers in exchange for shortstop Eugenio Suarez and Single-A pitcher Jonathon Crawford. Jocketty followed that up by dealing Latos to the Marlins for pitcher Anthony DeSclafani and Single-A catcher Chad Wallach.

Suarez provides a possible upgrade for Zack Cosart at shortstop. He was called up by Detroit at least a year earlier than he should have been, due to Jose Iglesias’ season-ending shin injury, and his numbers reflect that. But he hit .288 with an .870 OPS between Double-A and Triple-A last year. And even in the majors, his .242 average and .652 OPS beat the .221 average and .568 OPS Cozart provided last season. 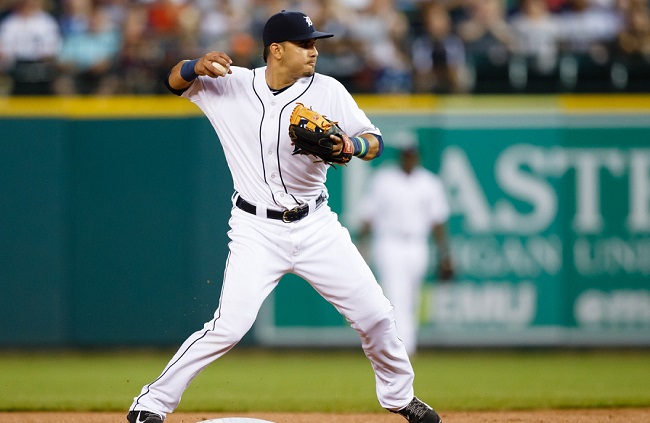 Cozart saved 12 runs more than the average shortstop on defense and was credited with 19 Defensive Runs Saved. Suarez doesn’t have that kind of glove, but should make up for that with his bat. If Suarez were to beat out Cozart for the shortstop gig next spring, Jocketty might be able to make a deal with a team looking for an elite glove at shortstop and save a possible $2 million in the process.

In Crawford, the Reds get the Tigers’ 2013 first-round draft pick who finished last season in low Class A. It’s rare to see Detroit give up on a young pitcher so quickly, but the 20-year-old had major issues with control, walking 50 batters in 123 innings and playing himself off the Tigers’ list of top 10 prospects. That setback in development obviously made him expendable, but gives the Reds a promising young arm that may have more of a future as a reliever than starter.

That’s a nice return for Simon, who can be a free agent after the 2015 season. Jocketty sold high on the reliever-turned-starter, who went 12-3 with a 2.70 ERA in the first half of last season, but cratered after the All-Star break, compiling a 3-7 record and 4.52 ERA while allowing more than a hit per inning.

Latos brought less in return from the Marlins, which was likely due to forearm, calf and elbow injuries that limited him to 16 starts last season. When he did pitch, the right-hander posted a career-low strikeout rate of 6.5 batters per nine innings. His velocity decreased by two miles per hour, and he relied far more on his changeup than the slider and curveball that made him formidable.

If he’s healthy, however, the Marlins get a potential top-of-the-rotation starter who will cost them less than $10 million. In exchange, Cincinnati gets someone that could possibly replace Simon in its rotation with DeSclafani. Baseball America rated the right-hander as Miami’s No. 5 prospect going into last season, and he struck out nearly nine batters per nine innings between Double-A and Triple-A. 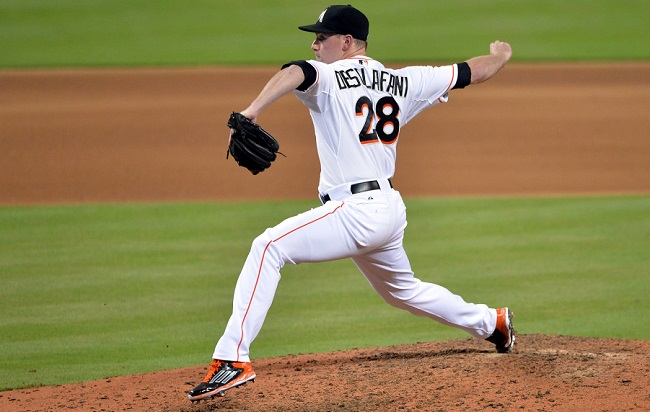 Though he struggled in 13 major league appearances, posting a 6.27 ERA and allowing 40 hits in 33 innings, DeSclafani pitched well in the Arizona Fall League, encouraging several scouts who watched him. Even better for the Reds, the 24-year-old is under club control for six more years, not eligible for arbitration until 2018.

Wallach is a long way from major league consideration, finishing last season in advanced Class A. But his bat certainly looks promising, batting .322 with an .888 OPS in 408 plate appearances.

The Reds had four starting pitchers set to become free agents after next season, including NL Cy Young Award runner-up Johnny Cueto. While Cueto’s $10 million club option for next season was almost ridiculously affordable for a pitcher of his caliber, Mike Leake, Latos and Simon were projected to make a combined $23 million through arbitration by MLB Trade Rumors.

According to USA Today, Cincinnati had a $112 million payroll for 2014, ranked No. 11 among the 30 MLB clubs. But for that money, the Reds got an enormously disappointing return, finishing 76-86 — just three games ahead of the last-place Cubs in the NL Central.

Maybe 2014 was just one of those seasons in which so much went wrong, such as Joey Votto playing only 62 games because of a quad injury and Brandon Phillips being limited to 121 games due to a torn tendon in his thumb that eventually required surgery. Aroldis Chapman missed the first six weeks of the season after taking a line drive to the head in spring training. Ryan Ludwick appeared in 112 games, batting .244 and hitting just nine home runs. Jay Bruce had the worst season of his career, batting .217 with a .654 OPS and 17 homers.

If Jocketty brought back largely the same club, could a better result be expected? Was that the approach the Reds would take into the offseason? Cross fingers that everyone stays healthy for next season, players like Bruce bounce back, and hopefully add the left fielder and relief arms behind Chapman that the roster needed?

Going into the winter meetings, rumors circulated that Jocketty was under orders from ownership to trim $15 million from the payroll. That was never confirmed by a trusted baseball insider or reporter, however. So perhaps it’s possible that Jocketty didn’t feel he needed to reduce payroll so much as create some room for greater flexibility, allowing the Reds to add the pieces they need.

Trading Latos and Simon is a big help toward that objective, saving the Reds $13.5 million if MLB Trade Rumors’ arbitration projections are correct (and they usually are). Cincinnati also shed $4.5 million by buying out Ludwick’s 2015 club option and trimmed another $9 million when Broxton was traded. Trading Chris Heisey to the Dodgers and non-tendering Logan Ondrusek likely saved another $4 million.

That apparently provides some room for the Reds to pursue a left fielder like Melky Cabrera or Mike Morse. Maybe someone like Alex Rios. Or Jocketty could take a run at the booming trade market for outfielders, perhaps getting one of the spare bats that the Red Sox, Cardinals, Dodgers, Rockies and Indians have accumulated. There are also plenty of quality relievers still available in free agency, many of whom could be signed at cheaper prices, now that the top of the market has found contracts.

While trading two starting pitchers may have given the impression that the Reds are about to rebuild, that apparently isn’t what the team has in mind. Shedding payroll might allow them to add the pieces that allows them one more run with the Cardinals and Pirates in the NL Central, while staying ahead of the developing Cubs for at least one more season. After next season, Jocketty might have more difficult decisions to make and Cincinnati could face some tough losses. But the Reds can worry about that a year from now.