Making certain plays more complicated or telling fans that what they think is an out — and has always been an out for as long as we’ve watched the game — probably isn’t what MLB had in mind when implementing a wider version of instant replay this year.

Yet two weeks into the 2014 season, the “transfer rule” is becoming increasingly problematic for players and managers. The latest example was seen during Monday’s Mariners-Rangers game in Arlington. Seattle had the bases loaded in the sixth inning when Brad Miller hit a grounder to Texas pitcher Pedro Figueroa. Figueroa threw to catcher J.P. Arencibia for a forceout at home plate, but couldn’t complete an inning-ending double play as he bobbled the ball while taking it from his glove. (Watch the play here.)

But at least Arencibia got that one out, giving the Rangers two in the inning, right? Well… not so fast. Not when instant replay has opened up the interpretation of what constitutes a catch as a player is transferring the ball from glove to hand for a throw. After Dustin Ackley was ruled out, Mariners manager Lloyd McClendon came out to argue that Arencibia didn’t have complete control of the ball while in the act of making a throw. Home plate umpire Paul Schrieber agreed and called Ackley safe. As you could surely expect, Rangers skipper Ron Washington went ballistic and was promptly ejected from the game.

In looking at the play, it’s difficult to argue that Arencibia had control of the ball as he was trying to make a throw to first base. But he made the initial catch while standing on home plate, which would presumably result in an out. That’s how such plays have worked in baseball for decades, even centuries. Not anymore, however. 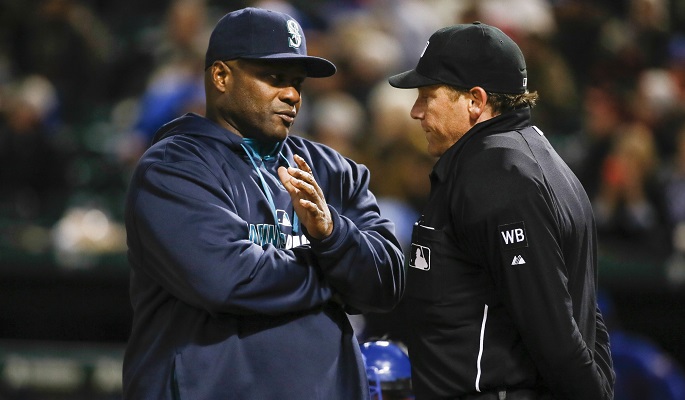 This part of Rule 2.00 [Catch] from the official MLB rulebook is what’s causing the issue: “In establishing the validity of the catch, the fielder shall hold the ball long enough to prove that he has complete control of the ball and that his release of the ball is voluntary and intentional. If the fielder has made the catch and drops the ball while in the act of making a throw following the catch, the ball shall be adjudged to have been caught.”

MLB issued a clarification of the rule, but actually made things more confusing, as far as the rule’s interpretation by umpires.

What constitutes “act of the catch”? Apparently, it’s not just the ball going into a player’s glove and the glove being secured around the ball. The transfer into the throwing hand is now a key element of the catch. The NFL would refer to this as the process of the catch. But where exactly does “the process” end in a baseball catch? Clearly, it’s not when the ball is secured within the glove. And the process doesn’t include taking a couple of steps after the ball is in the glove. Just ask the Indians’ Elliot Johnson, whose catch was ruled not a catch after just such a play on April 9.

Managers like McClendon have figured out that the language of the “transfer rule” and the loophole it creates can be used to an advantage in certain situations. (The Mariners have been burned twice on this rule, both times due to Ackley dropping the ball after a catch as he tried to transfer the ball to his throwing hand. Hold on to that baseball, Ackley!) If the rule has already caused this many problems so early in the season, it’s sure to be a frequent issue throughout the season.

Hate the rule, not the ump? In their defense, umpires are calling the rule as it’s written. As the season progresses, perhaps there won’t be such a literal interpretation. But don’t umpires have to be consistent in how they enforce this rule — at least for the rest of this season? Plays that were ruled not to be outs can’t be called outs weeks and months from now. How is that fair to the teams that have already been affected by how the rule was previously interpreted?

Instant replay was supposed to make disputed calls clearer. Is the runner safe or out? Is that ball a home run or a foul ball? Is that a catch or not a catch? Oops. The answer to that third example isn’t so clear anymore. 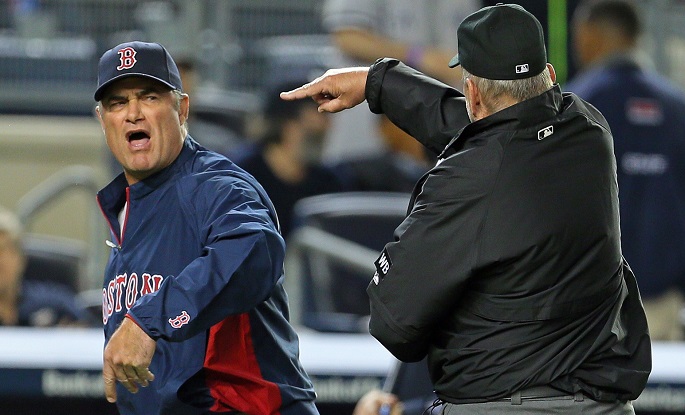 The uproar and demand for instant replay was due to umpires missing calls that could be seen clearly with multiple cameras and various angles available in every major league ballpark. (Though even that’s become a problem, as we saw during the April 12 Red Sox-Yankees game when umpires said they didn’t have the same footage that was available to TV viewers at the time.) MLB had the technology to make sure the right call was made. But as we now know, the right call depends on the rule being enforced. The human element hasn’t been phased out of the game, after all.

That’s not how it was supposed to be, though. Smart people quickly learn how to game the system because it’s their job to do so.

“I think the what-ifs are almost limitless,” Rays manager Joe Maddon told the Tampa Bay Times‘ Marc Topkin. “And that’s the part people don’t even understand. When you open Pandora’s box, it’s not as cut and dried as you think.”

Managers and executives are simply doing their jobs by trying to exploit the rules as currently constructed to gain an advantage. As a result, instant replay suddenly doesn’t look like the cure-all that its proponents (including myself) hoped it would be. It was surely naive to think this would be simple.

But if there’s one bright side to this, it’s that the manager-umpire argument is still alive and well in baseball. The fear among many fans and analysts going into the season was that we’d no longer see skippers and umps go at it because instant replay would resolve all disputes. Managers also weren’t allowed to argue the result of replay calls under this new system. Yet that didn’t stop Washington on Monday, nor John Farrell over the weekend in New York from voicing some serious disagreement. As we get later into the season and the pressure builds among managers as playoff bids and jobs are on the line, maybe we’ll see some on-field stomping, dirt being kicked and bases being thrown.

However, that’s really a small consolation to what looks to be a growing problem.