The second half of the 2015 MLB season begins on Friday, with four of the six division races still close and looming dogfights for those second wild-card spots in each league. As always, that should make for some compelling baseball during the final two-and-a-half months on the regular season schedule.

Of course, the trade deadline (both the July 31 non-waiver and Aug. 31 waiver editions) should provide plenty of intrigue and stoke plenty of rumors for the next couple of weeks. And we have some potentially thrilling races in the AL East, NL Central and AL West that could relegate some traditional powers to lower seeds in the postseason or leave them on the outside looking in altogether. There also promises to be some fierce competition for baseball’s major awards with several players having outstanding seasons.

With that, here are the 10 most compelling storylines to follow during the second half of the MLB season.

Who gets Cole Hamels?

The biggest name on the trade market is still available, though it’s possible Hamels won’t be the tipping point in a playoff race this season. For instance, what if he goes to the Red Sox? Or the Rangers? The news would be Hamels finally getting traded, the Phillies parting with their biggest asset — one which could provide a much-needed infusion of young talent into their organization — and a team getting an ace-caliber starter for the next three to four years. (Oh, and about $85 million worth of salary to pay out.) But if the left-hander doesn’t go to the Dodgers, Cardinals, Blue Jays or Astros, how much does that affect this season?

Which playoff race does Johnny Cueto decide?
Now here’s the guy that could influence any number of division and wild-card chases, not to mention be a significant factor in the postseason. Cueto is having another spectacular season, as working a curveball into his arsenal has made him much more of a strikeout pitcher. Since he can be a free agent after the season, the Reds aren’t in position to ask for the boatload of prospects that Ruben Amaro Jr. is expecting in Philadelphia. (Well, Cincinnati GM Walt Jocketty can certainly ask. And a team that thinks Cueto is the final piece may meet that price.) Cueto could end up being the decisive factor in the AL East or AL West races, or may tip the balance of power in the NL. 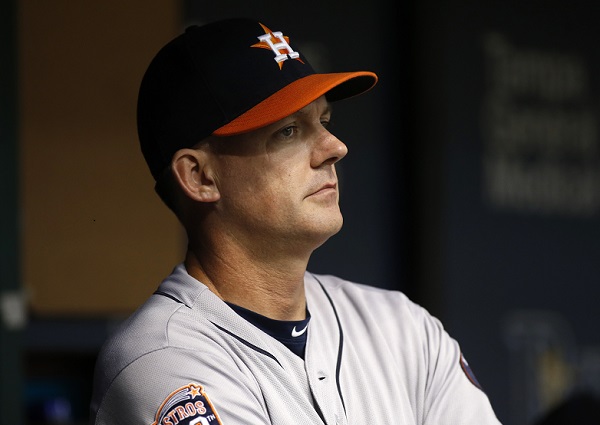 ST. PETERSBURG, FL – JULY 10: Manager A.J. Hinch #14 of the Houston Astros looks on from the dugout at the start of a game against the Tampa Bay Rays on July 10, 2015 at Tropicana Field in St. Petersburg, Florida. (Photo by Brian Blanco/Getty Images)

Will the Astros continue to slide?
Houston was the surprise team of the first half, as the rebuilding project with young talent finally came together. At one point, the Astros had the best record in the AL. But it’s been a rough July (3-8 record for the month), which perhaps coincides with George Springer breaking his right wrist. The starting rotation needs some help behind Dallas Keuchel, Collin McHugh and Lance McCullers, especially with McCullers facing an innings limit. GM Jeff Luhnow has the resources to get Cueto, Jeff Samardzija or Hamels — or even David Price, if he becomes available — and no other contender may need a top starter more. Luhnow may also need to look at a bat, as Chris Carter continues to hit below .200.

Are the Cardinals vulnerable?
St. Louis has held the best record in MLB throughout the first half, but the hard-charging Pirates are making a run at them in the NL Central. Injuries — Adam Wainwright, Matt Adams, Jordan Walden, Matt Holliday, Jaime Garcia, Jon Jay — may finally be taking a toll, and though the Cards’ depth has patched those holes nicely, there’s only so much help GM John Mozeliak can bring in before the trade deadline. But the focus will surely be on the starting rotation, as outstanding as the unit has been this season. Acquiring a No. 1 starter looks like a priority. Cueto or Hamels would be an excellent fit, along with serving the dual purpose of keeping at least one of those arms away from the Dodgers and Giants.

The four-team race in the AL East
Kansas City has firmly established itself as the best team in the AL, and could land a knockout blow by acquiring a blockbuster starting pitcher or hitter at the trade deadline. But that still leaves the AL East as the most intriguing and competitive division in MLB, with four teams all within five games of each other. The Yankees currently have a 3.5-game first-place lead, but their fortunes could change quickly with a thin roster full of aging players. GM Brian Cashman could make a deal to help separate from the pack, but that hasn’t been his style in recent seasons. The Blue Jays look like the X-factor in this race. If Alex Anthopoulos can get a top-tier starting pitcher and impact reliever, the division may lean in Toronto’s favor.

Will the Padres be trade deadline sellers?
San Diego GM A.J. Preller became the darling of the offseason by overhauling his roster with significant additions, especially in the outfield with Matt Kemp, Wil Myers and Justin Upton. But Preller perhaps should have been more concerned than whether or not those new pieces fit well together. It’s certainly been a bad mix, as the Padres are eight games under .500 at the All-Star break, 10 games behind the Dodgers in the NL West and 7.5 games away from the league’s second wild-card spot.

At the very least, Preller could push impending free agents Upton, Ian Kennedy, Joaquin Benoit and Will Venable, trying to get what he can in return. But he would make more of an impact by offering Craig Kimbrel, James Shields, Tyson Ross or Andrew Cashner either to contenders or upstarts looking to add. 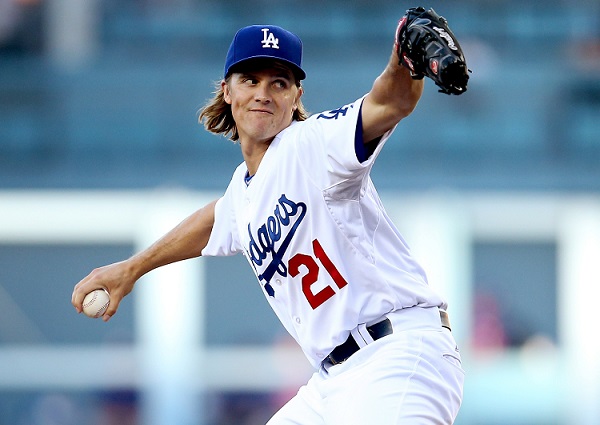 The NL Cy Young race
Interestingly, the NL Cy Young Award was the one unanimous pick among The Outside Corner staff for midseason honors, with all of us giving our first-place votes to Max Scherzer. And though that likely won’t change if Scherzer continues to be dominant, Zack Greinke had one of the most quietly great first-half performances in MLB history, compiling a 1.39 ERA. As the Washington Post‘s Barry Svrluga pointed out, Greinke holding that mark would give him the lowest ERA by a starting pitcher in nearly 50 years. What about Greinke’s teammate — and reigning NL MVP and back-to-back Cy Young Award winner — Clayton Kershaw, who’s supposedly having a “down year,” but leads the league in strikeouts and Ks per nine innings? Gerrit Cole and Jake Arrieta are also having excellent seasons that could draw consideration from awards voters.

Will Corey Seager or Mark Appel be called up?
The 2015 season has been the year of the rookie, with several superstar prospects such as Kris Bryant, Joc Pederson, Noah Syndergaard and Carlos Correa among the upstarts making an impact for their respective teams. That doesn’t leave too many more top minor leaguers left to be called up this year. But two highly regarded prospects could still be summoned and could end up providing a significant boost for their respective teams.

Seager is the No. 1 guy on Keith Law’s midseason top prospects list, and was quickly promoted to Triple-A after dominating Double-A. The Dodgers might not need to call him up with Jimmy Rollins currently at shortstop, but Seager looks like an upgrade. But Don Mattingly didn’t exactly do well working Joc Pederson into the lineup during a pennant race last year. Appel is further down Law’s list and has a 4.58 ERA (while allowing 10 hits per nine innings) in the minors. But with the Astros needing some starting pitching help, they may not be able to resist giving their 2013 No. 1 pick a shot in the rotation.

Will we have a 100-win team?
MLB hasn’t had a team win 100 games since the Phillies reached triple digits in 2011. The closest a team has come since is 98 victories, with the Angels earning that total last year and the Nationals getting there in 2012. That doesn’t figure to change this year. The Cardinals have a shot, with 56 wins at the All-Star break. St. Louis would have to go 44-29 in the second half to reach 100 wins, notching victories at a .602 winning percentage. Considering the Cards played .629 ball in the first half, that seems possible. Especially since they’ll probably have to play that well to stay ahead of the Pirates. The Pirates would have to go 47-27 (.635) to get to 100 wins, while the Royals need a 48-28 second-half mark (.631). Those are tall mountains to climb.

Could Jonathan Papelbon’s head actually explode?
As he’s made entirely clear, the Phillies closer wants to be traded badly. Actually, the closer doubled down on that sentiment, imploring the Philadelphia front office to “shit or get off the pot” during an All-Star Game press conference. It certainly does the Phillies no good to keep Papelbon and closers are always in high demand among contenders. But how many teams actually need a capital-C closer, especially one due the remainder of his $13 million salary this season and will almost certainly be owed $13 million next year once he triggers a vesting option? The Blue Jays, Cubs and Rangers come to mind, while the Nationals might want some insurance for Drew Storen. And the Dodgers are always in the mix for adding relievers and big contracts. But what if Amaro doesn’t find a fit and Papelbon is stuck in Philly?

I don’t know about you, but there’s a part of me that kind of wants to see this happen.