The Arizona Fall League wrapped up yesterday after a championship game that featured both plenty of promise and plenty of reminders why these guys aren’t in the major leagues yet. The game saw the Scottsdale Scorpions (made of players from the Giants, Indians, Red Sox, Tigers, and Twins) take on the Surprise Saguaros, a team consisting of players from the Royals, Rangers, Yankees, Brewers, and Cardinals. The Scorpions won the championship in their home ballpark thanks mostly to a few players in particular from the Giants and Twins.

For Minnesota, Taylor Rogers started the game and pitched three scoreless innings, earning the win. The rest of the Twins pitching staff played in the game as well, as Trevor Hildenberger and Jake Reed pitched scoreless innings in relief, both earning holds with Nick Burdi earning the save in the ninth despite allowing the only home run of the game. Offensively, it was the Giants setting the table with short stop Christian Arroyo and left fielder Mac Williamson each reaching twice and scoring off hits from Tiger Dominic Ficociello and the Twins Adam Walker II.

While there was plenty of great pitching and timely hitting in the 6-4 game, the defense was seen in both extremes. Seven errors were committed including one by Arroyo, who had five in the short regular season. The Saguaros had four errors themselves including a couple that set up two unearned runs that ultimately decided the game.

On the regular season, many players from the Advanced A level through AAA were able to stand out. Winning the league MVP was Adam Engel of the Glendale Desert Dogs (Chicago White Sox) for his .403/.523/.642 line with 10 steals. He also was fourth in the league in walks and struck out just 11 times for the best K/BB rate in the AFL. Engel played with Winston-Salem this year, the White Sox Advanced A club and stole 65 bases during the regular season. Given that his recent success came against more advanced players than he had been playing, there is reason for Chicago fans to feel much more confident about their 17th ranked prospect.

Beyond Engel, the most outstanding sluggers were Gary Sanchez (7 HR, 21 RBI, .625 SLG) of Surprise and Jeimer Candelario (5 HR, 16 RBI, .610 SLG) of Mesa. Candelario is the Cubs’ 20th ranked prospect and spent time in both A+ and AA this year. His AFL numbers in 22 games are particularly impressive because he had just 10 home runs and a .431 slugging percentage in 128 games during the regular season. He’s just 21 and could be major league ready as soon as next year, giving the Cubs just what they need, another slugging infielder who is less than incredible in the field.

Sanchez has already broken into the majors for a couple games as the Yankees catcher despite being just 22 years old. He lead the AFL in home runs and RBI this year and there is little surprise he is considered New York’s fifth best prospect after blowing through both AA and AAA this year. Slugging catchers are a rarity and Sanchez should be considered particularly valuable by the Yankees, who haven’t had a stable force behind the plate since Jorge Posada retired.

It’s hard to get significant innings in the AFL for any pitcher with the gigantic rosters and few games and none made more than seven starts or 11 relief appearances. One who stood out in this limited action was John Simms of the Salt River Rafters. While he didn’t stand out as a 23 year old in AA for the Nationals this year, he allowed just five earned runs in 24 innings, striking out 18 to just six walks. He won four of his five starts and finished with a league best (18 IP min.) 1.88 ERA.

The AFL’s strikeout king was Sean Manaea of the Mesa Solar Sox in his second professional season since being a first round pick of the Royals in 2014. Now a member of the Athletics and considered their third best prospect, Manaea struck out 33 in 25.2 innings, both the highest total and K/9 (18 IP min.) in the league. His ERA of 3.86 wasn’t as impressive, but he didn’t allow a single home run during the fall campaign. Considering his 10.8 K/9 so far in his short MiLB career, there is little question that the A’s got the best of this part of the Ben Zobrist trade.

A final pitcher of note, while leaving many great players unstated, was Josh Hader, currently of the Milwaukee Brewers. Onto his third franchise already, Hader has been traded for Bud Norris and Carlos Gomez and holds a 2.95 ERA in 363 innings at just 21 years old. For the Saguaros, Hader was used both as a starter and reliever and allowed just a single run in 16 innings. While he did walk seven, he allowed eight hits and struck out 19 as one of the top relievers in the AFL this year. 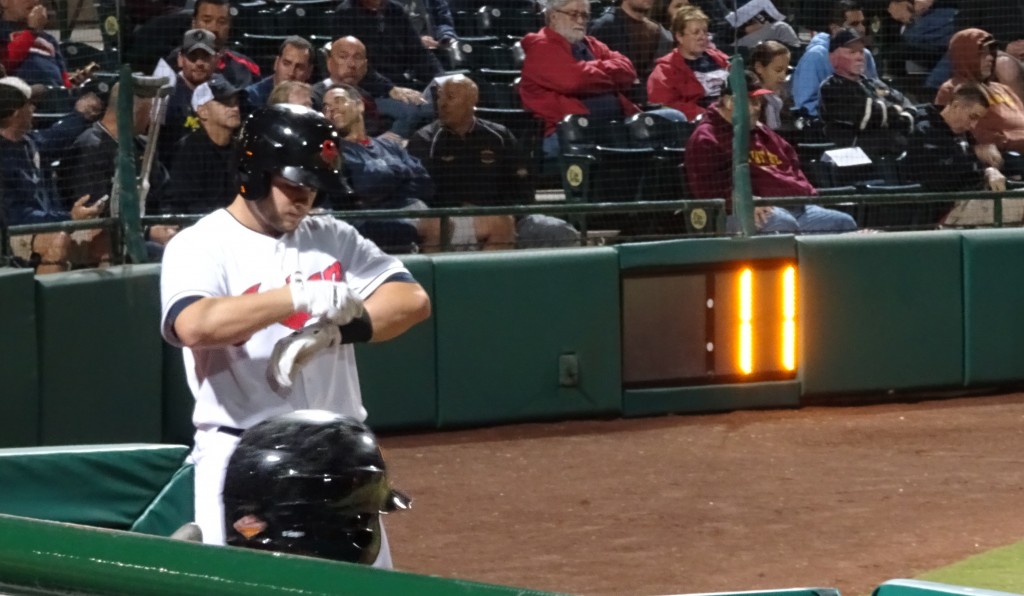 In addition to being a place where players seeking a little extra playing time can showcase themselves, the AFL is often the first place that new rules are tested to see the fit. This year, for the second year in a row, in addition to the clock between innings and pitching changes that is already in use around the league, the AFL used a pitch clock. When the bases were empty, a digital clock behind home plate gave pitchers 15 seconds to begin their wind-up. From the games I have seen in person, the pitchers were never bothered by this clock although they generally did not start the pitch before the clock was nearly out. If Major League Baseball keeps insisting on speeding up the game, this does not appear to alter the game in any significant way. While the old school baseball traditionalists will certainly be against any kind of “shot clock,” the test run ran as smoothly as it could have.