The Brewers spent 150 days in first place in 2014, but missed the playoffs entirely following one of the worst end-of-season collapses in baseball history. Now they have to try to put the memories of that collapse behind them while trying to contend in one of baseball’s toughest divisions. Will last year be a motivator for the 2015 team, or will it be the dark cloud that looms over another season? 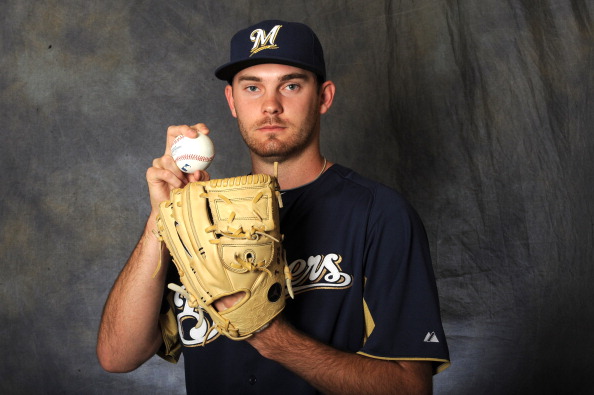 MARYVALE, AZ – FEBRUARY 26: Taylor Jungmann #78 of the Milwaukee Brewers poses for a portrait during a photo day at Maryvale Baseball Park on February 26, 2012 in Maryvale, Arizona. (Photo by Rich Pilling/Getty Images)

Impact Rookies: The Brewers are slowly rebuilding what became one of baseball’s most barren farm systems and much of last year’s team is still in tact, so the list of rookies that could make an impact this season is pretty short. The Opening Day roster is pretty much set, so it’ll take an injury two for a rookie to get a real shot in Milwaukee.

With that said, Taylor Jungmann could still end up playing a key role for the Brewers in 2015. A first-round pick in 2011, Jungmann went from the most successful pitcher in college baseball to having to completely rework his mechanics as a pro. Never one to blow hitters away to begin with, Jungmann was hit hard and struggled with command during his first two years as a pro. He turned a corner last year, though, after becoming more comfortable with the delivery and pitch-grip changes the Brewers made with him. After the Brewers traded away Yovani Gallardo, Jungmann became the 6th starting pitcher on the organization’s depth chart. He’ll likely start the year in Triple-A Colorado Springs rather than work as a long man out of the bullpen, but will still probably make his big league debut at some point this season.

One of the pieces in the Gallardo trade, reliever Corey Knebel, still has rookie status and the Brewers like him as an eventual back-end bullpen piece, but the veteran-packed bullpen will make it tough for him to get an opportunity early. 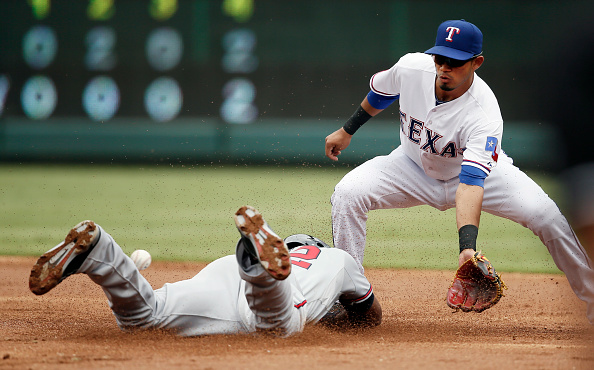 ARLINGTON, TX – SEPTEMBER 14: Luis Sardinas #3 of the Texas Rangers is unable to catch the throw from home as Jason Heyward #22 of the Atlanta Braves steals second during the second inning of a baseball game at Globe Life Park on September 14, 2014 in Arlington, Texas. Texas won 10-3. (Photo by Brandon Wade/Getty Images)

Position Battles: The Brewers parted ways with Rickie Weeks this offseason, meaning Scooter Gennett will get second base all to himself this year. Most of the Brewers’ position battles will be for the last couple spots on the roster. Aramis Ramirez will need regular days off at third base, so the likes of Luis Jimenez, Hector Gomez and Luis Sardinas will be spending the spring fighting for the chance to start once or twice a week. That’s not exactly an inspiring list of utility infielders, but the Brewers like the power Jimenez showed in the Angels’ farm system last year and Sardinas’ glove would play anywhere in the infield. 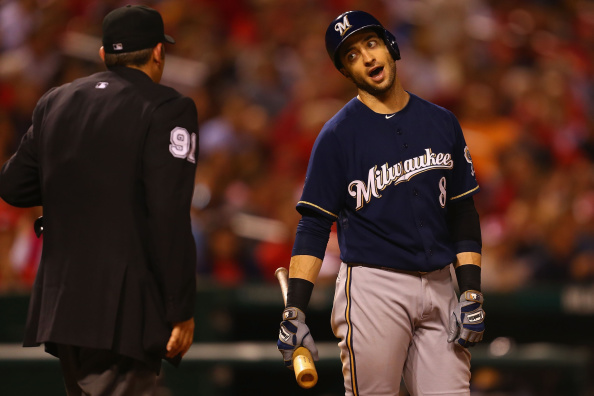 ST. LOUIS, MO – SEPTEMBER 16: Ryan Braun #8 of the Milwaukee Brewers argues a strike three call in the sixth inning against the St. Louis Cardinals at Busch Stadium on September 16, 2014 in St. Louis, Missouri. The Brewers beat the Cardinals 2-1 in 12 innings. (Photo by Dilip Vishwanat/Getty Images)

Injury Concerns: All eyes are on Ryan Braun’s right thumb this spring. A nerve issue that has plagued Braun and sapped his power since before his 2013 suspension was finally dealt with this offseason with an experimental procedure. The hope is that freezing the nerve will permanently remove the pain that made it hard for Braun to swing the bat with much authority. The Brewers need Braun to return to an All-Star level if they’re going to have much hope of contending this year, so any potential flare-ups will be met with a lot of, well, hand-wringing.

The Brewers also employ Matt Garza and are expecting him to be the #2 starter behind Kyle Lohse. Enough is probably said already. He hasn’t thrown 190 innings or made 30 starts in three years. 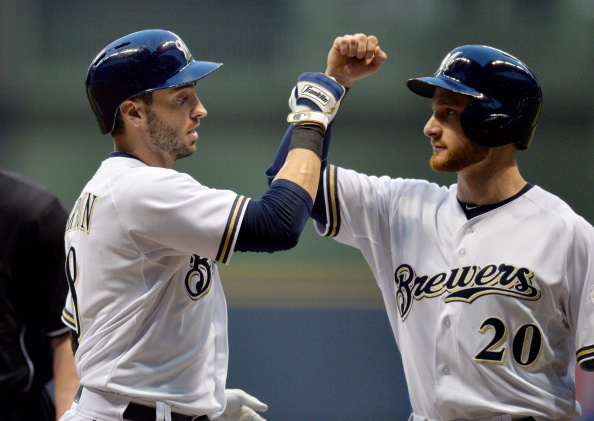 Most Important Player: Jonathan Lucroy and Carlos Gomez may prove to be more valuable in terms of wins above replacement this year, but Braun remains their most important player. Without Braun producing like a star, the Brewers’ lineup lacks pop — especially on the days where Aramis Ramirez is on the bench. We caught a glimpse of just how anemic that offense could be late last year, when Braun and the rest of the lineup limped to the finish line. If Braun can return to form, you have to go pretty deep into the Brewers’ lineup before you find a weak spot. With a relatively unproven backend of the rotation, Milwaukee’s going to need to get back to their old slugging ways if they’re going to be a true contender in the division. 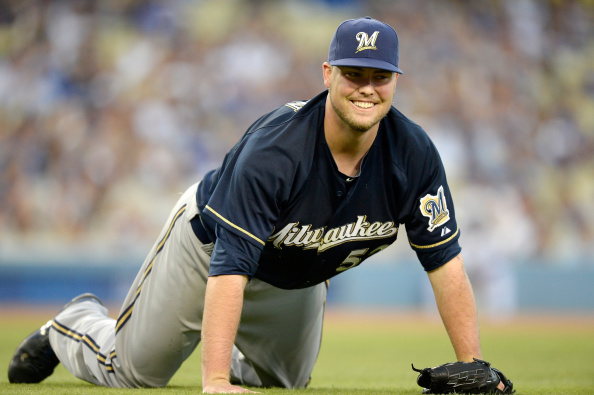 LOS ANGELES, CA – AUGUST 15: Jimmy Nelson #52 of the Milwaukee Brewers reacts after his fielding attempt at a ball off the bat of Dee Gordon #9 of the Los Angeles Dodgers for a single during the first inning at Dodger Stadium on August 15, 2014 in Los Angeles, California. (Photo by Harry How/Getty Images)

X-Factor: The Brewers traded Yovani Gallardo late in the offseason because they felt Jimmy Nelson was ready to step in as a full-time member of the starting rotation. Nelson made 12 starts last season and put up a 4.93 ERA, but his 3.78 FIP is a much more encouraging number, and Nelson has a history of struggling after a promotion before figuring out a level. After making Triple-A in 2013, Nelson put up a 3.67 ERA before forcing the Brewers’ hand with a 1.46 ERA in 16 starts in Triple-A last season.

Replacing Gallardo, who’s actually ended up being one of the three or four most productive homegrown Brewers pitchers ever (yeah, it’s a short list, but Gallardo was underrated for years), won’t be easy. But the Brewers are hoping that Nelson will give them similar production — close to 200 innings with an ERA in the mid-to-upper 3s — for a fraction of the cost. If he can do that, the Brewers have a pretty solid rotation, even if they lack a true number one starter (or even a high-end #2 starter). 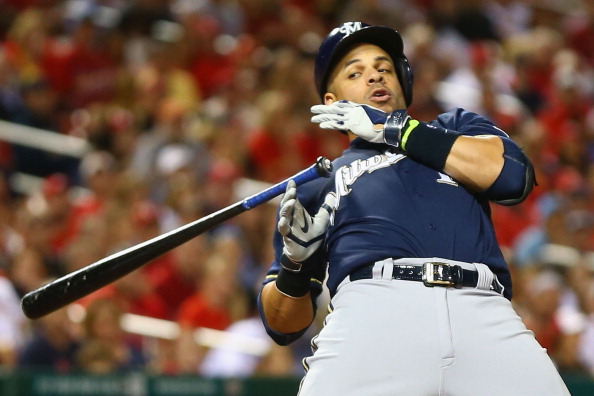 ST. LOUIS, MO – APRIL 28: Aramis Ramirez #16 of the Milwaukee Brewers reacts after getting hit by a pitch in the sixth inning against the St. Louis Cardinals at Busch Stadium on April 28, 2014 in St. Louis, Missouri. The Brewers beat the Cardinals 5-3 in 12 innings. (Photo by Dilip Vishwanat/Getty Images)

Key Question: Can they bounce back from that horrific collapse to end 2014?
The Brewers were so bad over the last month and a half of last year that it was actually kind of easy to overlook just how bad the collapse was. They were in first place for 150 days. They were 19 games over .500 on June 28th. Then they went 2-11 in the final 13 games before the All-Star break. They temporarily righted the ship following the break, but it fell apart for good starting in mid-August. A three-game sweep of the Dodgers in LA and a win against Toronto got the Brewers to 71-55. They proceeded to crash and burn from that point, going on a 3-16 run as part of a 12-25 finish.

The Brewers have enough veterans on the roster that there probably isn’t much worry about a season-long hangover after coming so close to the playoffs. But will the younger players be looking over their shoulder, waiting for things to go bad again? And with the Cardinals and Pirates looking strong and the Cubs on their way up, was last year the Brewers’ last best chance to make the postseason for awhile? 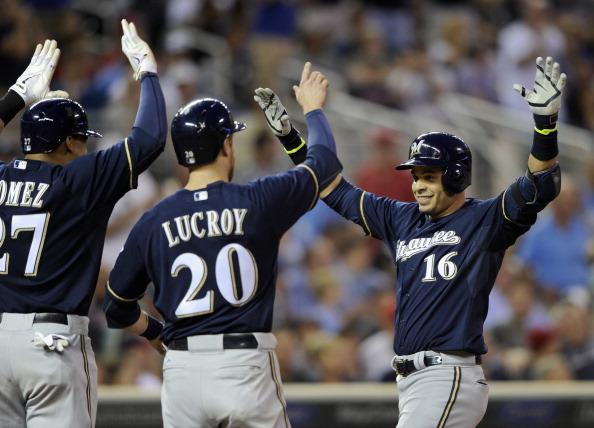 MINNEAPOLIS, MN – JUNE 4: Carlos Gomez #27 and Jonathan Lucroy #20 of the Milwaukee Brewers congratulate teammate Aramis Ramirez #16 on a three-run home run against the Minnesota Twins during the seventh inning of the game on June 4, 2014 at Target Field in Minneapolis, Minnesota. The Twins defeated the Brewers 6-4. (Photo by Hannah Foslien/Getty Images)

Best Case Scenario: If Braun is back to his old self and Adam Lind can provide consistent offense at first base — something the Brewers haven’t had since Prince Fielder left — the Brewers may field their most complete lineup since 2011, which was Prince’s last year with the Brewers. It’s not a coincidence that’s also the last time the Brewers won the division. The NL Central will be a bloodbath this year, so a division title may be out of reach even in a best-case scenario, but if everything goes the Brewers’ way this year they should find themselves near the top of the wildcard race.

Worst Case Scenario: Here’s the thing with Ryan Braun — even if the thumb holds, the Brewers need to brace themselves for the chance that his days as an elite player are still over. He’ll be 31 this year and lost two peak-performance years due to the thumb injury and suspension. Oh, and his 5-year, $100 million extension doesn’t even start until *next* year. If the thumb flares up again this year and is something he’ll just have to deal with the rest of his career, that contract becomes Ryan Howard-level bad for a team that can’t afford any bad contracts.

A still-hobbled Braun mixed with another injury or two would drop the Brewers from contention, possibly fighting to stay out of the cellar this year without much hope of things getting better anytime soon.

Realistic Prediction: Here’s the thing with Ryan Braun — even if the thumb holds, the Brewers need to brace themselves for the chance that his days as an elite player are still over. He’ll be 31 this year and lost two peak-performance years due to the thumb injury and suspension. Oh, and his 5-year, $100 million extension doesn’t even start until *next* year. If the thumb flares up again this year and is something he’ll just have to deal with the rest of his career, that contract becomes Ryan Howard-level bad for a team that can’t afford any bad contracts.

A still-hobbled Braun mixed with another injury or two would drop the Brewers from contention, possibly fighting to stay out of the cellar this year without much hope of things getting better anytime soon.