Are the Angels now the worst organization in baseball? It seems almost impossible that any franchise could ever step to the Marlins and dare displace them atop the dysfunction power rankings. Yet somehow in the last six months and culminating in the resignation of Jerry Dipoto, Arte Moreno and company have shown the world that when it comes to reprehensible behavior, they go to 11.

To be fair, things haven’t exactly been sunshine and rainbows in Anaheim for the last few years. There have been multiple reports of unrest behind the scenes from almost the second Dipoto made the fateful decision to come aboard the S.S. Scioscia. He thought he was hired to be the captain of the ship, but quickly found out that the man he thought was going to be his first mate actually considered himself to be the admiral. Dipoto did what he could to tamp down the slow burn of a mutiny that his manager has been leading for the last three and a half years, but Moreno grabbed the wheel and steered the Los Angeles Titanic of Anaheim right into a Josh Hamilton-shaped iceberg.

Coming off a 98-win season that was largely drama-free, 2015 should’ve been full of hope for the Halos. Then Hamilton’s drug relapse happened and that seemed to set Arte Moreno off. The team immediately began distancing itself from Hamilton. His locker was removed from the spring training clubhouse. Any signage around Angel Stadium featuring Hamilton’s name or image was removed. All Hamilton-related merchandise disappeared from the team store. Moreno then came out in public and said he wasn’t sure he’d welcome Josh back to the roster. Not exactly the ideal way to treat an injured player who was battling a substance abuse problem and going through a divorce. Support this was not.

But things didn’t get really ugly until an arbitrator ruled that Hamilton couldn’t be suspended for his relapse, triggering a series of statements from the club that showed how much more they cared about getting out of Hamilton’s contract than helping him in his time of need. Team president John Carpino, Moreno’s personal puppet, angrily stated, “It defies logic that Josh’s reported behavior is not a violation of his drug program.” GM Dipoto tried to toe the company line with his own statement:

The Angels have serious concerns about Josh’s conduct, health and behavior and we are disappointed that he has broken an important commitment which he made to himself, his family, his teammates and our fans. We are going to do everything possible to assure he receives proper help for himself and for the well-being of his family.

And, of course, the team then tried to circumvent the collective bargaining agreement and void the rest of Hamilton’s contract. This was Hamilton’s team, let’s not forget. Moreno specifically chose to sign him. The Angels should’ve been on his side in the process, supporting him. Instead, they took turns throwing him under the bus, backing the bus up and throwing him under it again and again. 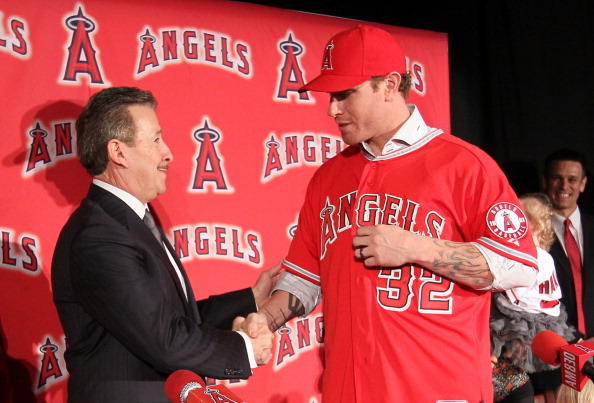 ANAHEIM, CA – DECEMBER 15: Owner Arte Moreno of the Los Angeles Angels of Anaheim and Josh Hamilton #32 of the Los Angeles Angels of Anaheim shake hands as Angels General Manager Jerry Dipoto (R) smiles in the background during the press conference to introduce Hamilton as the team’s newest member at ESPN Zone at Downtown Disney on December 15, 2012 in Anaheim, California. (Photo by Victor Decolongon/Getty Images)

Eventually, they reached a deal to send Hamilton to Texas to end the saga once and for all. Alas, the despicable behavior didn’t stop there.

In the last three months, the Angels have tried to force their ticket takers to keep working during the national anthem. They also had their VP of marketing and ticket sales come out and tell everyone that they are deliberately trying not to sell tickets to poor people. To top it all off, the team has gotten into an ugly battle with the city of Anaheim over stadium renovations because the city has the audacity to not give Moreno a whole bunch of land for free, so the owner is now threatening to move out of the city. That’s not a great look in a community where fans are still pretty sensitive about the whole “Los Angeles of Anaheim” name change thing.

The Angels have burned just about every bridge they can within their community and now with the contentious resignation of their general manager, they apparently decided to start burning down their own house now, too. When Dipoto was first hired, many insiders speculated that the GM position in Anaheim would be an undesirable one, due to concerns that Moreno meddled too much and that Scioscia wielded too much power in the organization. With Scioscia and his coaching staff basically deciding that they weren’t going to utilize the information and scouting reports provided by the front office, and then having Moreno side with Scioscia when Dipoto got upset that the manager was overtly undermining him, those “concerns” have been proven beyond a shadow of a doubt and then some.

What’s worse is that even with all of this very recent bad press for the team, they don’t seem to be learning their lesson at all. Literally the day after Scioscia forced his own GM out of the organization, he came out and had the audacity to demand that Hamilton apologize to the Angels team and Moreno. That couldn’t be a more shining example of how Scioscia is never going to learn and never going to change, something Dipoto found out the hard way.

A meddlesome owner, a tyrannical, thick-headed manager that controls the franchise and an organizational philosophy that willingly and repeatedly offends their own fans and community. Even Jeffrey Loria can see that these are dark times in the Magic Kingdom.