This is one of my favorite columns to write each year, and it’s largely a meaningless one. In the middle of February, Nevada casinos begin to roll out their projected win totals for MLB teams, allowing bets to be placed on the over or under. Well, those over/unders were released on Friday, and it’s now time to dig deep and discover which totals are the best bets.

Very confident
Indians over 81 wins. The Indians won 85 games last year, and after ending April on a six game losing streak, they went 74-60 the rest of the way. The only AL teams better were the Angels, Orioles, and Mariners (by just half a game). Is it really that much of a stretch to think that Cleveland will at least match their 2014 win total? Hell, I think they’re a playoff team in the American League – betting on them to finish over .500 is a no-brainer for me.

Rockies under 70.5 wins. The Colorado Rockies are not a good team. Their pitching staff is still pretty awful. They’re banking on the health of Troy Tulowitzki once again this year, and considering Tulo has been on the DL  for at least 25 games in four of the last five seasons and turned 30 in October, I wouldn’t feel very confident in his abilities to stay on the field for a full season in 2015. Also, consider the competition in the NL West. The Dodgers are somehow better. The Padres are much better. The Diamondbacks look a little better on paper. The Giants look worse, but are still a very good team. It’s going to be tough for the Rockies to scratch wins across in that division.

Dodgers over 91 wins. This situation is a lot like the Indians situation. LA was a 94 win team last year, replaced junk at the back-end of their rotation with Brandon McCarthy, upgraded behind the plate, upgraded at second, arguably upgraded at short, dramatically upgraded their bullpen, and arguably upgraded their third outfield spot. Yet, they’re going to win fewer games in 2015 than in 2014? I don’t buy it. Baseball Prospectus’s PECOTA projections, which agree with Vegas on Cleveland and Colorado, have the Dodgers at 97 wins. PECOTA shouldn’t be considered gospel, but when there’s that big of a disagreement, I’d be willing to side with the numbers as opposed to the gamblers. 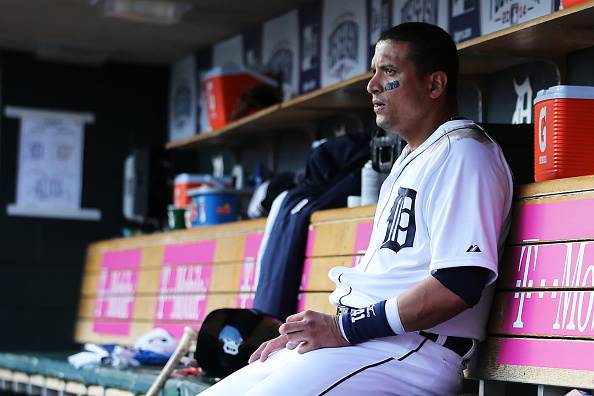 DETROIT, MI – OCTOBER 05: Victor Martinez #41 of the Detroit Tigers looks on from the dugout in the sixth inning against the Baltimore Orioles during Game Three of the American League Division Series at Comerica Park on October 5, 2014 in Detroit, Michigan. (Photo by Leon Halip/Getty Images)

Reasonably confident
Tigers under 86.5 wins. I don’t think this is a great Tigers team at all. They’re replacing Max Scherzer and Rick Porcello in their rotation with Alfredo Simon and Shane Greene, which could result in a loss of something like six wins from 2014. Their bullpen, which was a mess in 2014, still looks like a disaster. Victor Martinez is already having knee issues following a career year in 2014. Miguel Cabrera and Justin Verlander are both a year older following down seasons for them both. Jose Iglesias and Anthony Gose are both question marks in their new every day roles. J.D. Martinez is coming off an insane career year that will be tough to replicate. There isn’t a lot that would need to go wrong for the Tigers for this season to turn into a nightmare.

Royals under 83 wins. Kansas City scraped and clawed to make the playoffs in 2014, then plowed through the Postseason to come within one win of a World Championship. But they’re banking on Edinson Volquez to replace James Shields, Alex Rios to replace Nori Aoki, and Kendrys Morales to replace Billy Butler. It won’t take much production to replace the latter two, but Rios and Morales aren’t exactly low priced, great bounce back options for the Royals. Their bullpen is still electric, and the team’s defense will be just as good as it was last season, but I don’t see another dream season happening.

Astros over 73.5 wins. Houston tacked 19 wins onto their 2013 season total last year, and this young club only got better this winter. Luis Valbuena replaces the wretched Matt Dominguez at third. Jed Lowrie takes over at short from Jonathan Villar. George Springer will be in the lineup for a full season. The dynamic bat of Evan Gattis is being slotted into the heart of Houston’s lineup. The awful bullpen got bolstered by the additions of Luke Gregerson and Pat Neshek. I don’t think Houston will challenge for a playoff spot this season, but I do think they’re going to flirt with .500 and blow away this projection. 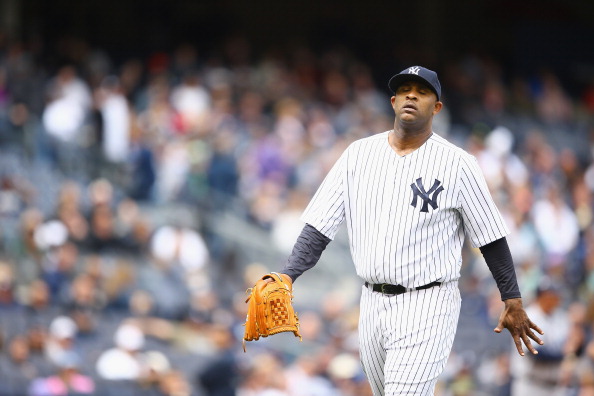 NEW YORK, NY – MAY 04: CC Sabathia #52 of the New York Yankees leaves the game in the fourth inning against the Tampa Bay Rays during their game at Yankee Stadium on May 4, 2014 in the Bronx borough of New York City. (Photo by Al Bello/Getty Images)

Not very confident, but I’ve got a feeling about these
Yankees under 80 wins. I’ll be frank – I think the Yankees are going to be pretty bad in 2015, simply because of how old their offense is and how erratic their rotation is. Every member of the Yankees projected lineup and bench is at least 30 except for Didi Gregorius and backup catcher Austin Romine (or J.R. Murphy if he ends up winning the job). Of those returning starters, none had an OPS of even .750 for the season (though Chase Headley was at .768 n his 58 games in the Big Apple). The bullpen has gotten better, but the only Yankee starter to throw as many as 140 innings last season was former Marlin Nate Eovaldi…and he led the National League in hits allowed. This is a team that could be in crisis by Memorial Day.

Reds under 79 wins. I don’t think it’s much of a stretch to say that the Reds are definitively the worst team in the NL Central. Well, either them or the Brewers, but at least Milwaukee has a couple of superstars up the middle. Cincinnati has Devin Mesoraco, Todd Frazier, Johnny Cueto, Aroldis Chapman, and…well, not much else. They sold low on Mat Latos, and got role players in return for Alfredo Simon. Their best hitter is Joey Votto, who played in just 62 games last season, is 31, and gets pilloried for leading the league in OBP. Their most significant addition to an 86 loss team was a 37-year old Marlon Byrd. I believe a lot will need to go right for the Reds to get better in 2015, considering the improvements made in the NL Central this winter.

Mariners over 85 wins. Seattle had a great year in 2014, and only got better this winter after adding Nelson Cruz, Justin Ruggiano, and Seth Smith (though I don’t like the J.A. Happ acquisition that much). They obviously play in a tough division, but when you combine their dynamic pitching staff with an improved offense, I think you’re looking at one of the three best teams in the American League.