Last night was the deadline for teams to tender contracts to their arbitration eligible players. Those that were not tendered contracts have now become free agents. I think a lot of people assume that if a player was non-tendered it means he isn’t good. That’s not always the case though. Sometimes a player just doesn’t fit with their former team. Sometimes they’re going to cost too much to keep. And often times those players are just hurt. While it might not make sense for their former team to retain their services, other teams may provide a better fit. Here are some of the best players among those non-tendered.

I’ve included their projected arbitration salaries as a sort of guide towards what to expect their potential contract to look like. The general rule of thumb is that a non-tendered player won’t make quite as much as they might have through arbitration. Though some may receive multi-year deals.

It’s somewhat surprising to see Petit get non-tendered. He’s only a year removed from a pretty excellent season with the Giants where he accrued a 3.69 ERA in 117 innings between the bullpen and the rotation. In some ways he reminds me a bit of a Marco Estrada type. The two have different repertoires but they both seem like fine back-end starters that could thrive in a bullpen role. Petit is even more of a junkballer than Estrada and his fastball sits around 87-88 which might scare some teams off. But if a team puts him in their bullpen as their long man and spot starter they could find themselves with a nice bargain.

Juan Nicasio is a former starter that made the transition to the pen in 2015. He pitched for the Dodgers throwing 58 innings with a 3.86 ERA and 2.83 FIP. He also struck out 25% of batters faced and enjoyed a 2 mph bump in his fastball. The problem is that his walk rate jumped to a career high 12.3%. That’s three percentage points higher than his previous career high so it’s possible that it was just a fluke. A team might be willing to take a chance that’s true and that his K% can hold or even improve with as he becomes more comfortable pitching out of the bullpen. 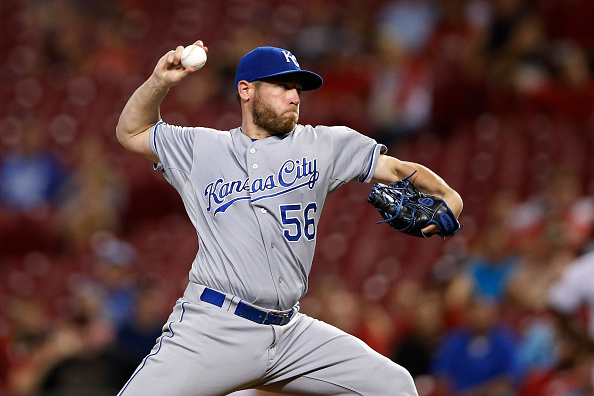 CINCINNATI, OH – AUGUST 18: Greg Holland #56 of the Kansas City Royals pitches in the 13th inning against the Cincinnati Reds at Great American Ball Park on August 18, 2015 in Cincinnati, Ohio. The Royals defeated the Reds 3-1 in 13 innings. (Photo by Joe Robbins/Getty Images)

Greg Holland might be the best arm non-tendered this year. He was a truly dominant closer for the Royals for four years only eclipsing the 2.00 ERA mark once. From 2013-2014 he earned 93 saves. But something was clearly wrong in 2015 as evidenced by his uncharacteristically high 13.5 BB%. Towards the end of the season it was revealed he had been playing hurt. It cost him, as his elbow required Tommy John surgery. As such, he will miss the entirety of 2016, but he’ll be ready for 2017. A team might see the sense in offering him a two year deal with a low base and incentives. The Royals are already talking to him about such a deal.

Here’s the real surprise of the non-tendered players. Henderson Alvarez is young, relatively cheap, and has a history of being rather production in the rotation. He is currently recovering from shoulder surgery though. Unlike with TJ surgery, the recovery rate for shoulders can vary and a return to form is not as guaranteed. Still, when healthy he’s a potential mid-rotation starter. And should that become a reality there is a strong likelihood he would turn down a qualifying offer and in doing so net his former team a draft pick. It seems a good risk/reward endeavor for just $4 million. Perhaps the Marlins know something about his medicals that isn’t public. Then again it’s the Marlins. It could feasibly be just about saving the money.

Speaking of now former Marlins, Steve Chisek is an intriguing option now available. He was traded to the Cardinals mid-season and was just okay. He’s probably not the high strikeout closer he once was. But he is still a solid lefty reliever you don’t have to hide from right handers. In fact he’s always handled them quite well. A quick view of his splits shows he was uncharacteristically awful against left handers in 2015. Perhaps it was just a fluke. Though it should be noted his velocity has been trending down for a few years. He’s may not worth $7 million AAV, but I could see him getting that much on a two year deal and being worth it. A savvy rebuilding team might even install him as their closer with an eye towards selling high at some point down the road. 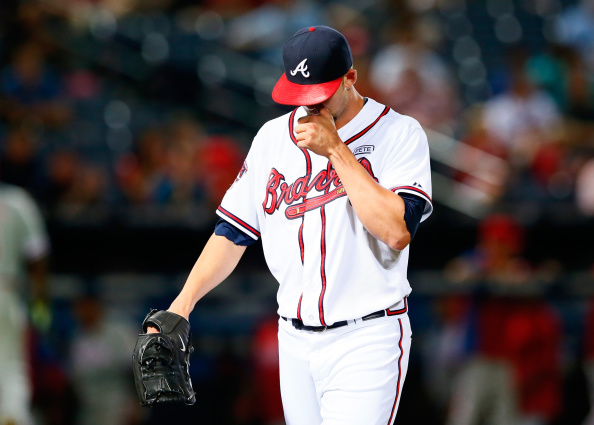 ATLANTA, GA – SEPTEMBER 02: Mike Minor #36 of the Atlanta Braves is relieved in the eighth inning against the Philadelphia Phillies at Turner Field on September 2, 2014 in Atlanta, Georgia. (Photo by Kevin C. Cox/Getty Images)

Here we have yet another injured starter and a cautionary tale for those interested in Henderson Alvarez. Minor also had shoulder surgery. His was back in 2014 and he still hasn’t returned to the mound. When he was healthy he was a solid 3/4 caliber starter. The hope here for an interested party is that the distance in time from his surgery means he’ll be ready for opening day. He’ll come cheap and I’d look at the contracts signed by Brandon Beachy and Kris Medlen (also former Braves, what’s going on there?) last year as examples of the type Minor may sign: one-year deal with a low base plus incentives and a cheap team option.

Flowers will enter his age thirty season next year and it will be on a major league roster. However it will likely be as a backup catcher. He’s not quite good enough to start, but he’s still got a lot to offer. For one thing he offers double digit home run power. In just 275 plate appearances during the 2013 season he hit 10 home runs. The following season he hit 15 in 442 plate appearances. He’s also pretty good defensively, earning positive DRS marks in every season but 2015. The problem is that he doesn’t really do much else right. His career batting average is .228 and his OBP is .289. Fortunately for him, this year’s free agent market for catchers is a wasteland, and the best options have already signed.

Speaking of players that might be helped by the poor free agent market, Ike Davis is available. He once hit 32 home runs with the Mets and looked like their longterm answer at first base. He’s done a whole lot of nothing since then. But there aren’t many first base options out there and a team might convince themselves they can fix him. If it was me I might be fine with him as a platoon option. But I’d feel sick to my stomach if he was my starting first baseman. 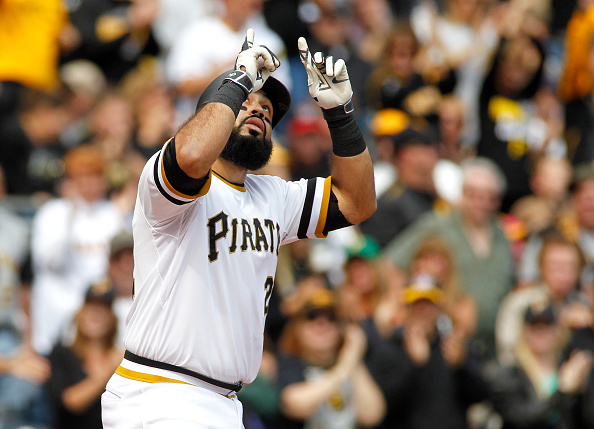 PITTSBURGH, PA – SEPTEM BER 13: Pedro Alvarez #24 of the Pittsburgh Pirates reacts after hitting a home run in the second inning during the game against the Milwaukee Brewers at PNC Park on September 13, 2015 in Pittsburgh, Pennsylvania. (Photo by Justin K. Aller/Getty Images)

I list Pedro Alvarez as a first baseman but really he should probably not be allowed out in the field. He has been pretty terrible every where he’s played. But he does have prodigious power in his bat. Thirty home run power is a scarce commodity these days. He doesn’t make enough contact to have a good batting average but he does draw a decent amount of walks. His OBP will likely never be very good, but with 30 homes to go along with it he’s a solid option to bat sixth in a lineup.

Honestly everything I just wrote about Pedro Alvarez applies to Chris Carter. The only difference is he strikes out a bit more and walks a bit more. They basically have an identical offensive ceiling. I suppose if you’re lucky, Carter lucks into striking out less and you have potential for better on-base with him. He might also only be below average defensively whereas Alvarez is a pure nightmare.

Will Middlebrooks – 3B, Projected Salary: $1.5 million

Will Middlebrooks is a middling player. It was once thought he might hit enough to project well at third base, but that hasn’t happened yet. He’s also somewhat below average defensively there which is strange because he always projected as a plus defender when he was a prospect. Injuries have played a big part in his decline. However the third base free agent market is David Freese followed by a bunch of nothing. A team that can afford to deal with his deficiencies might see fit to give him an opportunity to finally reach his potential, or he could serve as a decent corner infield bench player.