Every year, both major and minor league baseball teams think of new, exciting ways to clog our arteries. Forget ballpark giveaways; instead, everyone wants to know about the totally insane food items making their debuts in ballparks around America.

The 2015 season is still a few weeks away, but there have already been some amazing and amazingly awful-looking foods announced in the majors and minors. Here’s a look at a few that have grabbed the most attention lately, and fair warning: reading this is going to make you indescribably hungry.

Churro Dog (Arizona Diamondbacks): The D-Backs introduced us all to the D-Bat Dog last year, an 18-inch corn dog stuffed with cheese, jalapenos, bacon, and Plavix (well maybe not the Plavix). This year, they bring us its dessert brethren: a churro enveloped by a doughnut, topped with frozen yogurt, whipped cream, and chocolate and caramel. The calorie count clocks in at somewhere past 1100, so thank goodness they decided to use frozen yogurt and not ice cream to save us a few pounds. This looks like it could be life changing… good or bad. 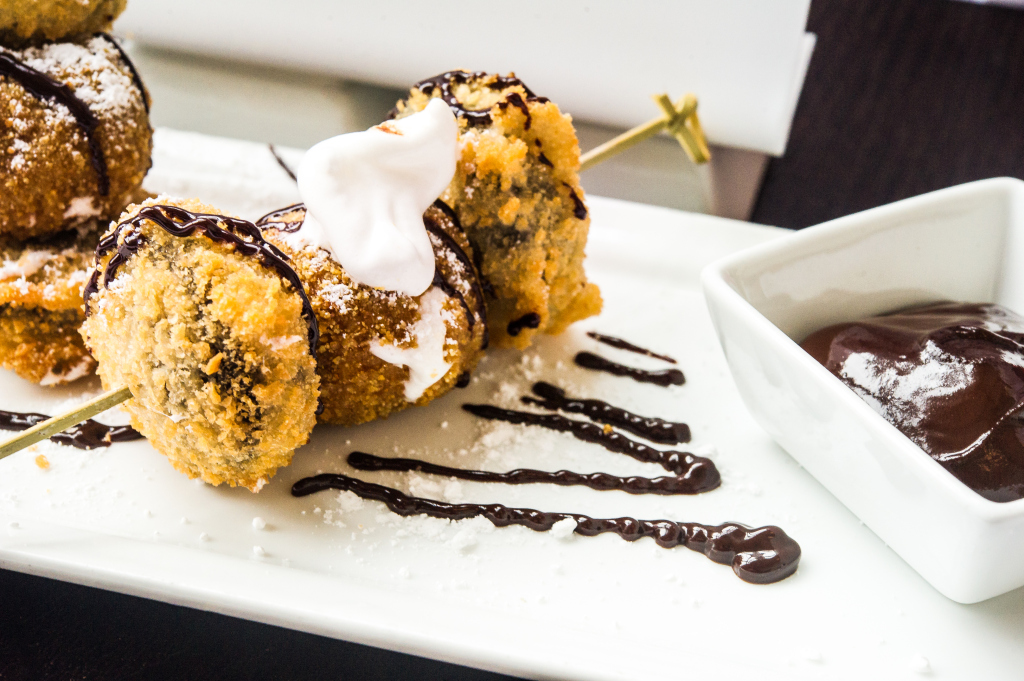 S’mOreo (Texas Rangers): It’s a deep fried marshmallow surrounded by two deep fried Oreos topped with chocolate sauce and whipped cream. Good God, that sounds good. And it’s practically bite sized so you won’t have as much as guilt as you would eating, say, the churro dog. Unless you eat three S’mOreos, for which I totally will not judge you. 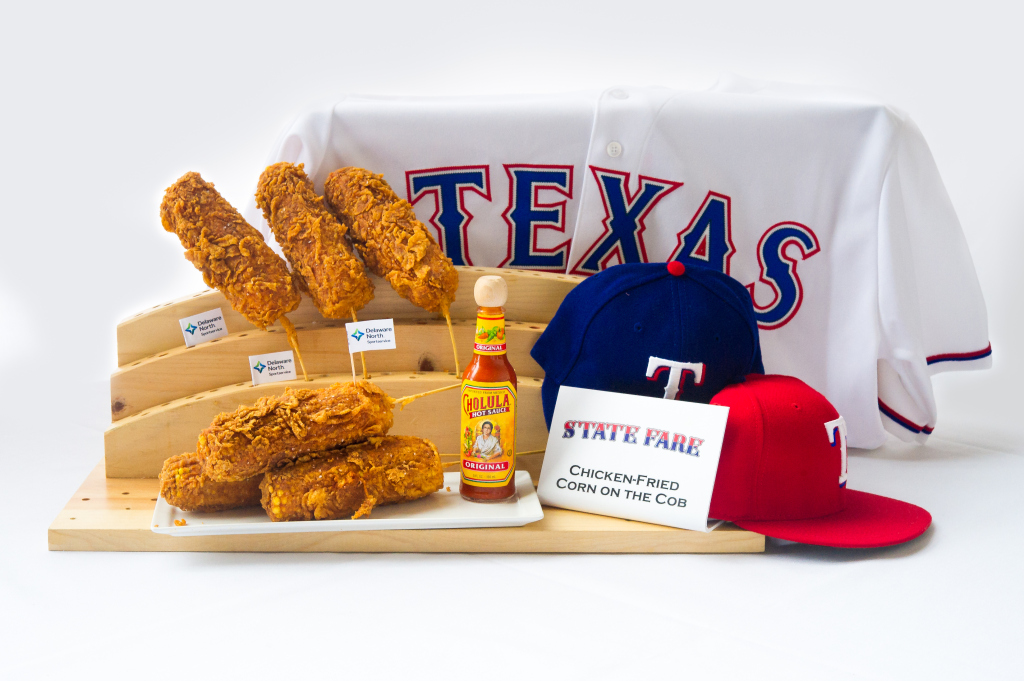 Chicken-fried corn on the cob (Texas Rangers): The Rangers strike again, taking a perfectly healthy corn on the cob and slathering it in buttermilk batter before tossing it in the deep fryer. It sounds like it might be hard to eat, but I’m willing to take that risk. 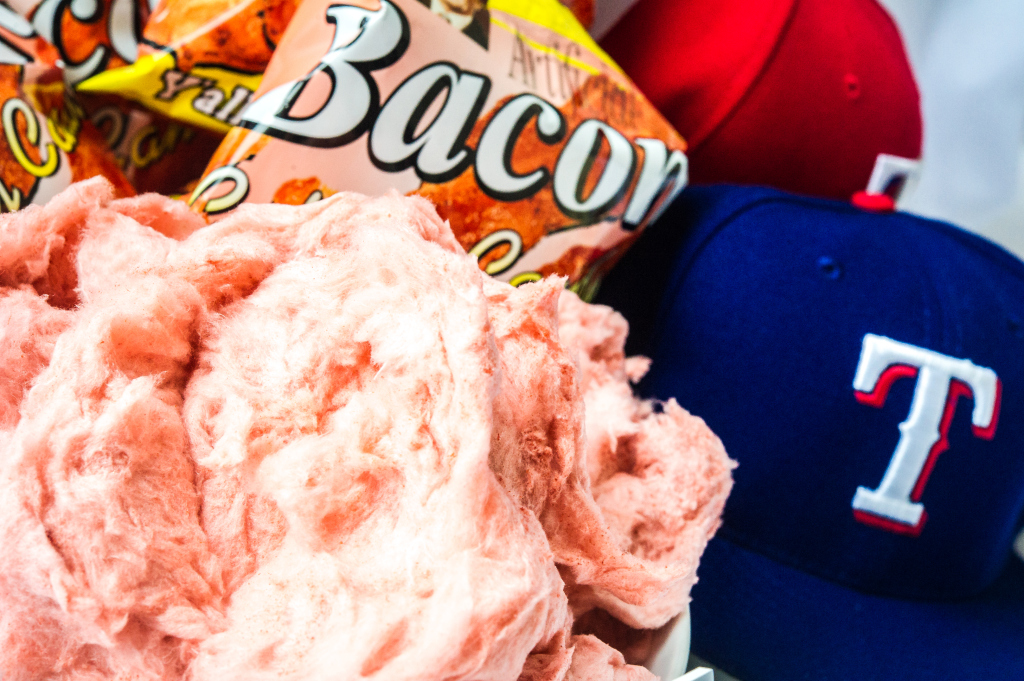 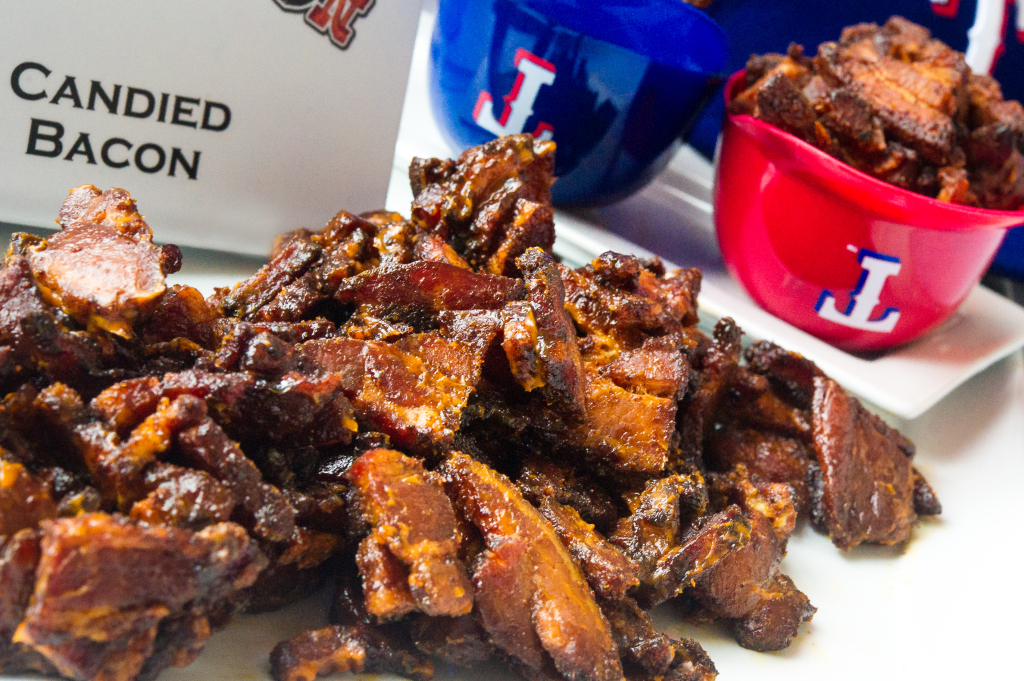 “Just Bacon” food stand (Texas Rangers): The Rangers are intent on riding the bacon fad as far as it will take them, opening up a stand in the ballpark dedicated to nothing but. They’ll sell candied bacon in a mini Rangers helmet, bacon cotton candy, even bacon beer. Everything on the menu sounds like a great idea until you actually try it, probably. But I’ll try a bacon beer. For science. 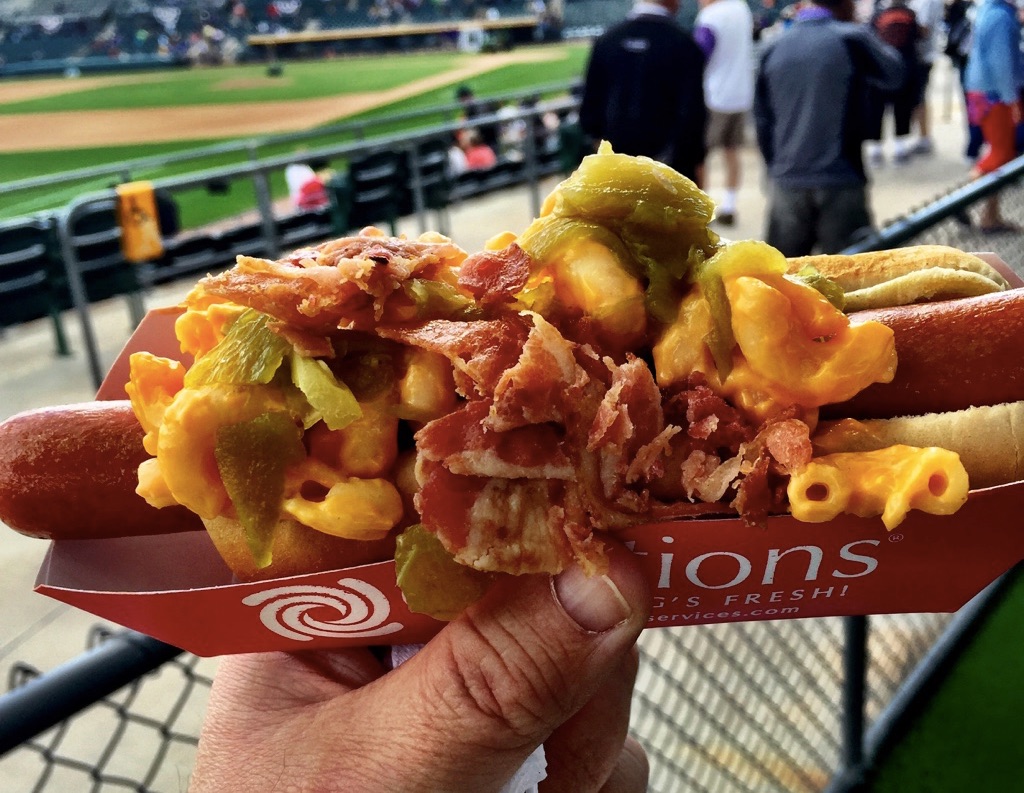 Oakland Dog (Oakland A’s, spring training): A hot dog topped with mac and cheese, chilies, and bacon– pretty straightforward, but the chilies take things up a notch. For now, it’s only available at the A’s spring training complex in Mesa. But wouldn’t it make sense to actually sell something called the Oakland Dog in Oakland?

Donut Dog (Wilmington Blue Rocks): Minor league teams usually have the most ingenious food items each year and this is no exception. It’s a hot dog in a Krispy Kreme glazed donut bun, topped with chopped bacon and raspberry jam. Think of it as the modern day Monte Cristo sandwich, but with a hot dog and bacon. It’s one of those things that doesn’t sound like it would be good, but is probably amazing. 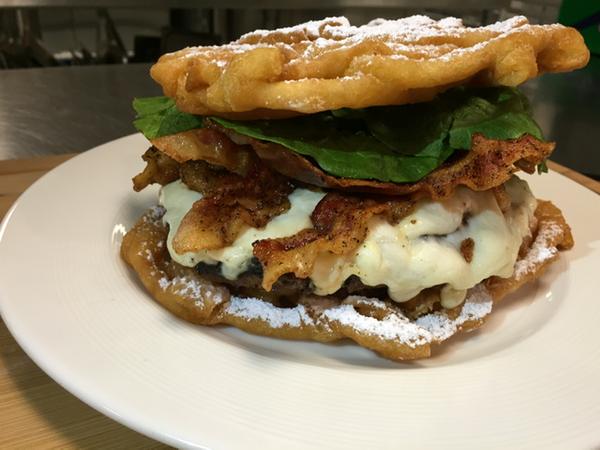 Big Mother Funnel Burger (Wisconsin Timber Rattlers): Wrapping meat in dessert items seems to be the new hotness this year. Instead of a hot dog, the Timber Rattlers are serving up a huge bacon cheeseburger wrapped in a funnel cake and topped with powdered sugar. Can a funnel cake hold up against that much grease? It seems like it would easily fall apart when you tried to take a bite. Well, only one way to find out. 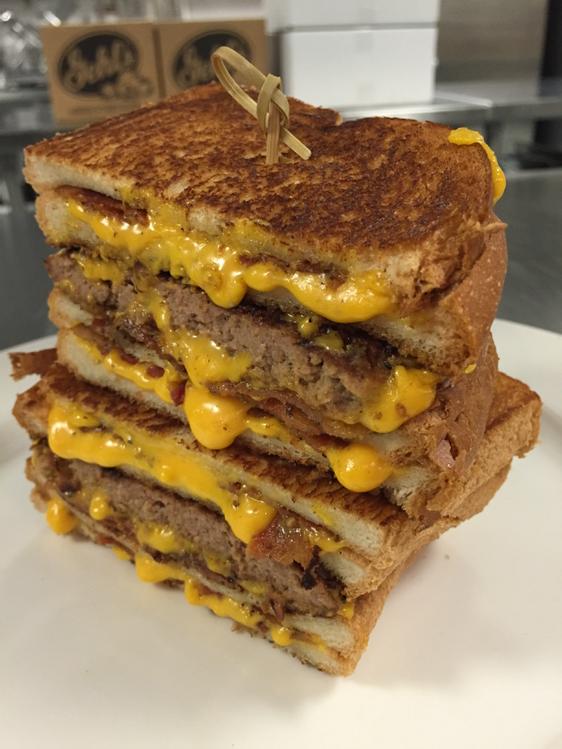 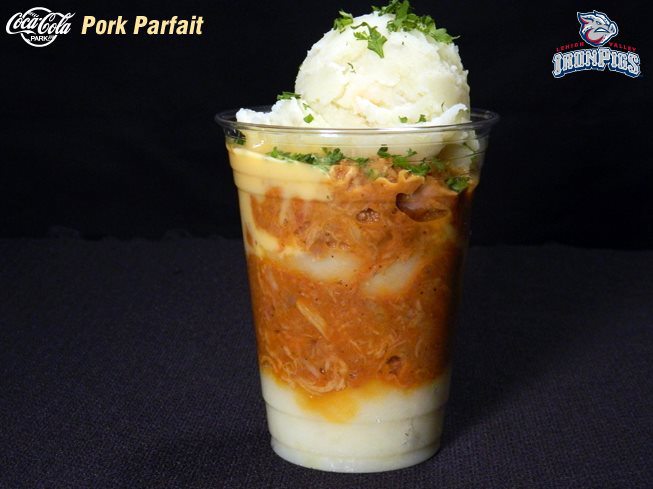 Pork Parfait (Lehigh Valley Iron Pigs): File this under the “foods that visually make me want to throw up but are probably pretty tasty” category. It’s mashed potatoes, pulled pork, cheese sauce and green onions made to look like a dessert cup. Maybe that’s what bothers me about it: my brain is expecting to see ice cream or something sweet in a parfait, not shredded pork. Still, it’s probably delicious. 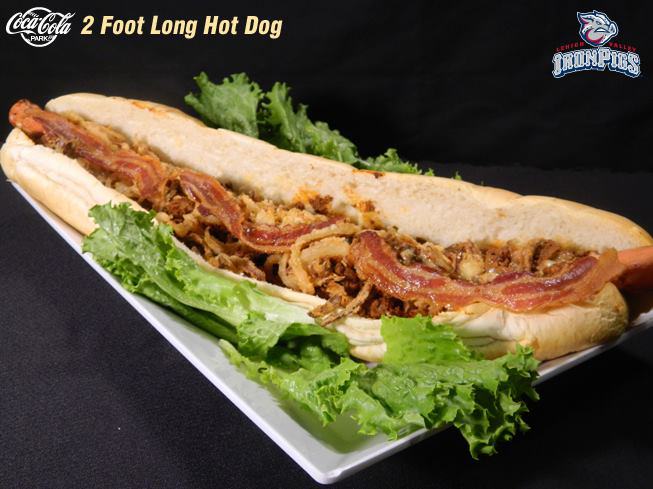 Two foot long hot dog (Lehigh Valley Iron Pigs): This one needs a better name. As you probably guessed, it’s a two foot long dog. But it’s topped with chili, beer cheese, bacon, and onion straws. They even cut it into four pieces so it’s easier to share– or to eat all by yourself. 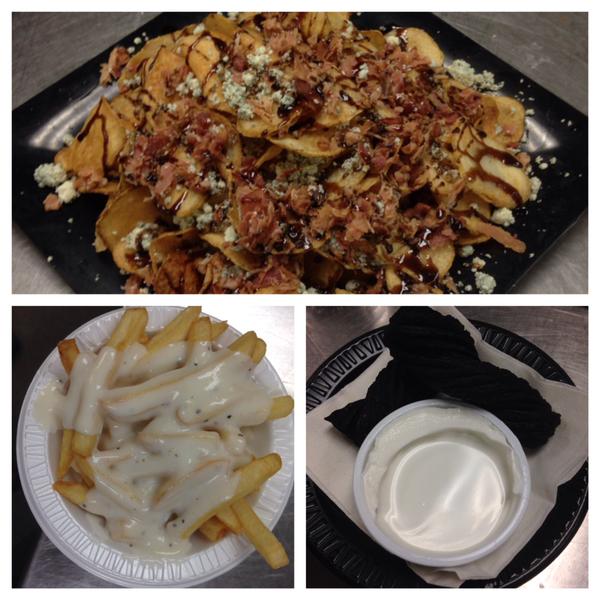 Oreo churros (Oklahoma City Dodgers): Combine two of the best desserts on the planet and this is what you come up with. There’s no real description yet, but it looks like a chocolate churro with Oreo cream dipping sauce. How good does that sound? I’ll take ten.

West Michigan Whitecaps food contest: Fans get to vote for their favorite item and have it added to the ballpark menu in 2015. The choices are: Beer-a-misu (tiramisu gelato in beer), Cheesy Does It (hamburger on a cheese bun), Cotton Candy Curveball (a Twinkie wrapped in cotton candy), Crispy Pig Chips (pork rind nachos), French Fry Pizza, Hot-to-Tot (tater tots with buffalo chicken and bleu cheese), Kat Dog (a hot dog with a Kit-Kat bar inside), Picnic on a Stick (chicken, tater tots, and pickles battered and fried…on a stick), The Legend of Pickle Hollowed (a hot dog in a hollowed out pickle, deep fried), and the Weenie Panini (panini hot dog).

I’d like to go on record saying the Kat Dog might be the grossest thing I can imagine. I’m voting for the picnic on a stick.