So I guess this is why Brandon Phillips doesn’t go by “@DatDudeOBP” on Twitter. (That Twitter handle is already taken, as I was informed Monday night.)

When asked if he was down with OBP, the Reds second baseman basically said, “No, you know me.” While talking to USA Today‘s Bob Nightengale, Phillips spoke out against the increased emphasis on a player’s on-base percentage among baseball writers and broadcasters. What’s amusing is who he singled out as the chief culprit of pushing OBP to the masses.

“I don’t do that MLB Network on-base percentage (stuff),” Phillips told USA TODAY Sports. “I think that’s messing up baseball. I think people now are just worried about getting paid and worrying about on-base percentage instead of just winning the game.

“That’s the new thing now. I feel like all of these stats and all of these geeks upstairs, they’re messing up baseball, they’re just changing the game. It’s all about on-base percentage. If you don’t get on base, then you suck. That’s basically what they’re saying. People don’t care about RBI or scoring runs, it’s all about getting on base.”

Phillips is making himself an easy target for anyone ready to attack critics of advanced metrics. That’s become entirely predictable among #BaseballTwitter.

However, the first question that comes to mind is how much MLB Network does Phillips actually watch? Is he referring mostly to Brian Kenny and the MLB Now crew? I suppose the chances are that players watch that show — which typically features at least one other panelist who shares a sabermetric viewpoint with Kenny — in the clubhouse during the season while they’re preparing for a ballgame.

But are viewers usually hearing a lot about on-base percentage from the likes of Harold Reynolds and Bill Ripken? Maybe so. It’s possible I wouldn’t particularly notice if one of the analysts on MLB Tonight was touting OBP because it just seems like a statistic that’s become a standard — a shorthand, really — when talking about a hitter’s performance. So discussing it wouldn’t stand out to me. 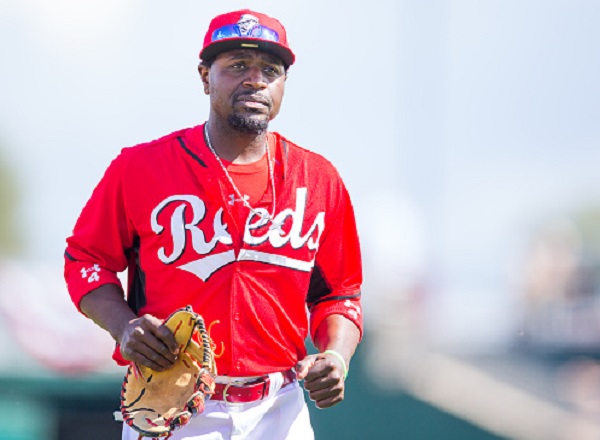 GOODYEAR, AZ – MARCH 3: Brandon Phillips #4 of the Cincinnati Reds looks on during a spring training game against the Cleveland Indians at Goodyear Ballpark on March 3, 2015 in Goodyear, Arizona. (Photo by Rob Tringali/Getty Images)

Perhaps that’s the point Phillips was trying to make. His complete quote is actually much longer, so click over to Nightengale’s article for the full remarks. But his main point seemed to be that baseball players aren’t evaluated the same way anymore, that batting average and RBI were previously the numbers by which a hitter was judged.

The anger Phillips feels about this is curious. Where does it come from? In 2013, we learned that Phillips was particularly sensitive about his OBP from an incident involving Cincinnati Enquirer reporter C. Trent Rosecrans. Rosecrans simply pointed out in a tweet that then-manager Dusty Baker was putting a batter with a .310 OBP (Phillips) in his lineup’s No. 2 spot, replacing a player with a .320 OBP (Todd Frazier).

Phillips was so upset over this that he confronted Rosecrans in the clubhouse and later interrupted Baker’s pregame conference with the media, tossing insults and taunts at the reporter. By the way, Phillips finished the 2013 season with that same .310 on-base percentage.

Last season, his OBP was .306, the lowest it’s been among his nine seasons with Cincinnati. That might further explain Phillips’ irritation, as observers can easily point to that number as an indicator of diminishing skills. Phillips could possibly counter by pointing out his .266 batting average was six points better than in 2013. But his slugging percentage and OPS were also the lowest of his Reds career, as he was hampered by a torn ligament in his thumb.

What also makes Phillips’ rant intriguing is that he shares a clubhouse with Joey Votto, who led the NL in on-base percentage in four of his past five seasons. The contrast between the two teammates was the point of Nightengale’s column. Obviously, Votto is down with OBP. That’s actually become a knock against the 2010 NL MVP among a certain contingent of Reds fans who think their big, $225 million first baseman should drive in more runs. The team’s broadcaster, Marty Brennaman, is one of those critics.

“if this guy comes back and is content to lead the lead in OBP again, then this team is in deep trouble,”-Marty on Votto #Reds @700wl

After reporting to spring training, Votto responded to that sentiment, calling it “ignorant.” He also noted that such a view is based in nostalgia, going back to a time when the game and hitter performance were judged differently. Apparently, that’s an era Phillips and Brennaman were more comfortable in. They’re wistful for the days when greater study of baseball, and the increased data and advanced metrics that’s come with it, wasn’t available to tell us more about why players succeed and fail.

Of course, the juicy part of this is two teammates with such a different view on how best to play the game. Does Phillips think Votto “sucked” last year because he hit .255 (yet had a .390 OBP)? Does Votto feel that Phillips is “ignorant” for believing that if everyone in a lineup just took walks, no runs would be scored? (Does Votto also wonder just what part of MLB Network Phillips is watching?)

Yet Phillips and Votto would surely agree that the ultimate goal of a hitter is to not make any outs. Phillips might argue for productive outs, such as moving a runner along or driving home a run on a sacrifice fly. But I presume that Votto doesn’t disagree with that.

The idea that a lineup is stagnant by drawing walks instead of swinging the bat is what’s truly bothersome about Phillips’ remarks. Do baserunners not get moved up if a batter takes a walk? Hey, if that happened four times in a row, a run would score! And does Phillips realize that his OBP goes up if he gets a RBI hit? I’m betting that he does. So he actually does do on-base percentage, whether he wants to admit it or not.

Maybe this just comes down to Phillips resenting that Votto is viewed as the better player and makes a hell of a lot more money, despite not doing what sluggers have historically been called upon to do: drive in runs. For someone who claims not to “give a damn what people think” of him, Phillips seems kind of sensitive about this, doesn’t he?