With the signings of Jason Heyward and Ben Zobrist, the Chicago Cubs not only improved a team that won 97 games and reached the National League Championship Series, but established a starting nine that has a chance to be among the very best lineups in the league. While it’s easy to look at the lineup and declare its sure prowess at the plate, though, the appeal of additions like Heyward and Zobrist lie not only in their ability to score runs, but especially to prevent them.

The Cubs can score runs, there isn’t any question about that. They scored the sixth most runs in the National League in 2015 (689) and were dominant during their second half run, where they scored 354 runs, third in Major League Baseball, overall. Heyward and Zobrist will definitely contribute in that regard. Heyward’s 3.8 oWAR in 2015 would’ve ranked him third among Cub hitters this past season, while Zobrist’s 3.1 figure would’ve ranked fourth.

Where the Cubs are really hoping that these two signings will pay off is in the field. The Cub set out this winter in search of not only help on the mound, but also some defensive help as well. Zobrist adds the versatility factor, more so than the impressive numbers, while Heyward brings a proven track record of elite defense. With Zobrist’s super utility presence and Heyward’s accolades with the glove, they should certainly be trending in the right direction.

It’s not as if the Cubs were completely porous defensively. A team that has improved steadily in the field over the last few years, which represents something of a parallel with their influx of youth, the Cubs actually match up quite favorably against their National League counterparts in many respects. Their 111 errors were the fourth most in the NL and their .982 fielding percentage did rank 25th overall in baseball, but advanced metrics really favor what the team did with the leather in 2015. Their 17.4 FanGraphs Def rating ranked ninth in baseball, and third in the NL, while their 23.4 team UZR was fourth overall in the league. 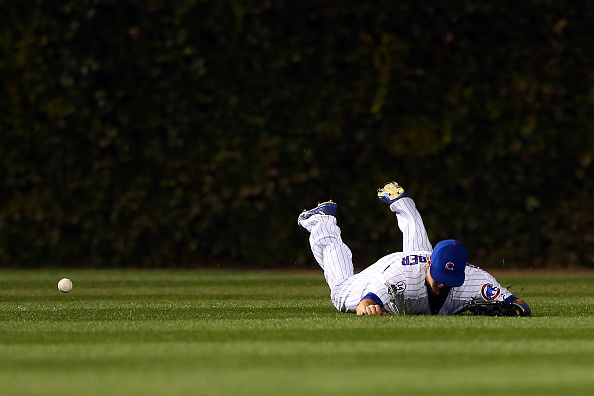 CHICAGO, IL – OCTOBER 21: Kyle Schwarber #12 of the Chicago Cubs misses a catch hit by Wilmer Flores #4 of the New York Mets in the first inning during game four of the 2015 MLB National League Championship Series at Wrigley Field on October 21, 2015 in Chicago, Illinois. (Photo by Elsa/Getty Images)

Of course, it’s important to note that while upgrading the defense was a priority, it was the outfield defense that presented some concern and, thus, was a focal point for the team heading into the offseason. Which is obviously where Jason Heyward comes into the mix. The Cubs rolled into the postseason with an outfield that ran Kyle Schwarber, Dexter Fowler, and Jorge Soler all the way across. While Fowler turned in one of the better defensive seasons of his career, Schwarber was a work in progress as a natural catcher. His transition reared its ugly head in the postseason, particularly toward the tail end of the Cubs’ run. Soler has also seen his fair share of struggles in the field, with a -7.0 UZR and -8 Defensive Runs Saved.

The question with Heyward and Ben Zobrist now entering the equation becomes how the Cubs will improve on defense heading into the 2016 season. As of right now, this is the projected lineup, assuming a trade of Soler doesn’t transpire in the near future. Each player features their UZR (Heyward’s is per 150 games, given a smaller sample at his spot) and their Defensive Runs Saved from 2015:

Behind the plate, the Cubs have one of the better defensive catchers in baseball, even if Montero’s offense isn’t always up to snuff. Which is probably why those early rumors that the Cubs could look to move him dissipated rather quickly. He finished fourth in the league in framing runs (16.2) and ninth in the league in blocking runs (0.2), just to give a really rough overview of his status behind the plate.

The prowess of the Cubs infield is no secret. Anthony Rizzo’s Def rating (-8.9) wasn’t favorable in 2015, but his 10 Defensive Runs Saved were the second most in the league, while his 3.4 UZR had him in ninth among big league first basemen. There’s some range there too, as his 33 Out of Zone plays made were the most among first basemen this past season. 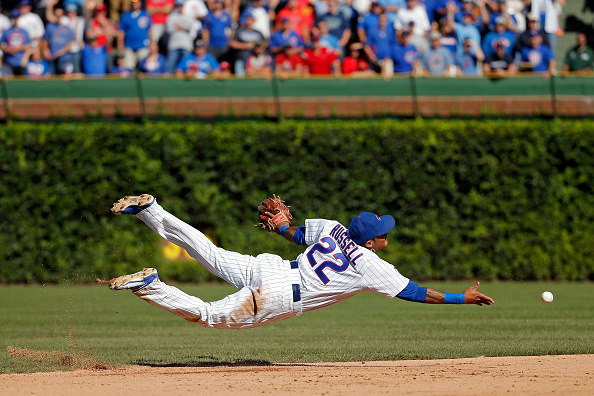 CHICAGO, IL – SEPTEMBER 19: Addison Russell #22 of the Chicago Cubs tosses the ball to Javier Baez (not pictured) for the final out of the game against the St. Louis Cardinals at Wrigley Field on September 19, 2015 in Chicago, Illinois. The Chicago Cubs won 5-4. (Photo by Jon Durr/Getty Images)

Whether he was playing short or second in 2015, Addison Russell was a human highlight reel. His incredibly smooth transition to shortstop, and improvements at the plate as the year went on, are part of the reason that the Cubs were comfortable dealing Starlin Castro to the New York Yankees. Despite logging only 471 innings at short, he still managed the fourth-highest DRS total in baseball, with 10, and a 20.4 UZR/150.

There was talk of Kris Bryant transitioning elsewhere in the field, but he turned in an impressive enough campaign that he should stick at the hot corner for some time. In a league with several outstanding third sackers, Bryant was right there in the mix defensively, with a 6.9 Def rating, a 4.8 UZR, and DRS of three. Those numbers might not be elite, but they’re all in the black.

It’ll be interesting to see how Ben Zobrist transitions into what has been a very capable infield on its own. His numbers across the board don’t paint the prettiest of pictures, though it’s important to note again that this was a move based on versatility, approach, and contact skills at the plate, more so than defense. Right field is the only spot where Zobrist had a UZR and DRS in the black this season. In reality, though, his defensive metrics don’t represent a necessarily stark contrast from Starlin Castro’s time at second base, either. Unless an extreme regression takes place with Bryant, Russell, or even Rizzo, this should continue to be an above average defensive infield.

The outfield is where things get tricky. Kyle Schwarber is a work in progress. He lacks instincts and is still developing his fundamental approach to left field. He’s a below average fielder who did a decent enough job of outplaying his ability with a -2.o UZR/150 and only -3 DRS. Soler has a potentially monster bat and a cannon for an arm, but has had his own issues with a fundamental approach in the outfield. Which is what makes the addition of Heyward so important.

Despite really earning his bones in right field, Heyward has as much range as any outfielder in baseball, which is why the Cubs have no real qualms about playing him in center. It’s a spot where he may not only have success as an individual, but could see his prowess with the glove translate to success for his corner outfielders as well. 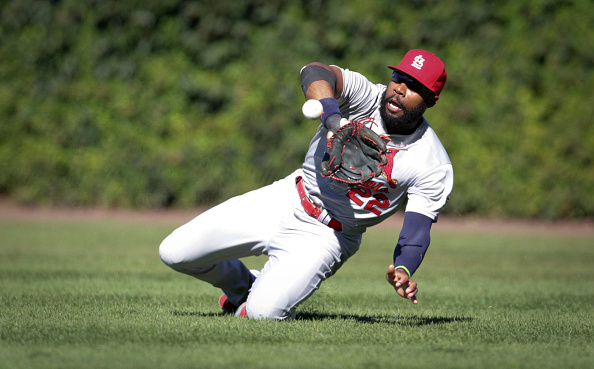 CHICAGO, IL – SEPTEMBER 20: Right fielder Jason Heyward #22 of the St. Louis Cardinals catches a ball off the bat of Kris Bryant of the Chicago Cubs during the sixth inning at Wrigley Field on September 20, 2015 in Chicago, Illinois. The Cardinals defeated the Cubs 4-3. (Photo by John Konstantaras/Getty Images)

Heyward didn’t spend any time in center in 2014 and only logged 51 innings there with the St. Louis Cardinals. But he notched a pair of Defensive Runs Saved and an off-the-charts-in-a-small-sample-size 75.5 UZR/150. Obviously don’t put too much stock into those numbers themselves, given that sample, but it does speak to his ability to transition to that spot relatively seamlessly.

Heyward’s 103 OOZ plays were the sixth most among Major League OF. Given the smaller nature of centerfield at Wrigley, this is a fascinating development. His ability to track balls down effectively in center, and demonstrate that type of range, could mean less work for the likes of Schwarber and Soler and could lead to a subsequent uptick in their defensive metrics. It’s not an entirely unreasonable scenario in any sense. Which should allow the Cubs to showcase a much steadier defensive presence in the outfield, just based on the merit of Heyward alone.

Of course, that doesn’t mean that the addition of Heyward makes Schwarber and Soler higher quality defenders. Just that they’d have less work to do. So it’s difficult to declare the Cubs’ outfield trio a highly improved one from left to right, though Heyward’s presence is a tremendous factor. Now, if the Cubs were able to move someone like Soler for an Ender Inciarte? We’re talking about perhaps the best 2/3 of a defensive outfield in baseball.

Until then, Cub fans can take solace in what the additions of Ben Zobrist and Jason Heyward can do for this team. Zobrist adds supreme utility to an already somewhat versatile lineup, while Heyward’s presence should lead to a steady uptick in growth, and a decrease in pressure, for the young corner outfielders.