The Cubs were the third best team in baseball in 2015, at least by season record. They toppled the Pirates in the Wild Card play-in game and proceeded to knock out baseball’s best team, the Cardinals, in the NLDS. They put up a fight against the Mets and went down swinging (pun intended) in the NLCS. It was the best season the Cubs have had in years and was just the start of their next competitive window. So expectations among Cubs fans for the offseason plan have been very high. The front office had made some moves earlier, but on Tuesday night, they really began to implement their plan.

After a relatively slow start to the Winter Meetings, things went off once the Cubs signed the multi-positional Ben Zobrist to a very fair four-year, $56 million deal. They didn’t wait long after that to trade shortstop Starlin Castro (and the remaining money on his contract) to the Yankees for RHP Adam Warren and utilityman Brendan Ryan. So far, the Cubs’ notable acquisitions include:

I like each one of these acquisitions. The only noticeable departure is Starlin Castro. But obviously, he’s being replaced with a better player in Ben Zobrist. By the way, in dealing Castro the Cubs unloaded $38 million over the next four years. So in a way, they spent $18 million to upgrade from Castro to Zobrist. Not too shabby.

With the signing of John Lackey, the Cubs improved a rotation that already included the high caliber talents of Jon Lester and Jake Arrieta. Their current fourth and fifth starters are Kyle Hendricks and Jason Hammel. Each had a sub-4.00 ERA and was worth over 2 fWAR. Hendricks was actually worth over 3 WAR. It’s not the Mets’ or Nationals’ super rotation, but it’s pretty damn good.

The additions of Trevor Cahill and Adam Warren improve the bullpen to an extent and provide depth for the rotation, which I think is one of the most undervalued aspects of a baseball team by most fans as a team will typically go 7-8 SP deep during a full season. Rex Brothers may or may not be an upgrade to the bullpen. He had a rough season with the Rockies in 2015, but looks like a reasonable bounceback candidate.

They join a deceptively strong bullpen. Hector Rondon, Pedro Strop, and Travis Wood did some heavy lifting last year. Each was worth over 1 fWAR in 2015. If he’s used exclusively out of the bullpen, Adam Warren could join them as a dominant reliever as well.

This is Adam Warren’s ZiPS as a full-time reliever. pic.twitter.com/vGXcX8pTqp

That’s four relievers that could give the Cubs 1+ WAR in value. We’re getting into Royals territory here, though it should be noted that the top end of their bullpen provided 2+ WAR value. The Cubs probably don’t have a single reliever quite that good.

As much as I like what the Cubs have done so far, they still have some work to do. Looking at their projected lineup, there is one glaring need and it’s a significant one.

Unfortunately for the Cubs, there really isn’t a great option in free agency. The best pure center fielder may be Dexter Fowler and I think they’re going to be looking for more of an upgrade than he provides. Fortunately for the Cubs, they likely have tons left to spend. Adding in pre-arb and arb eligible players, the Cubs have approximately $163 million committed to 2016’s payroll.

That is a significant jump from 2015’s opening day payroll. It’s approximately $43 million more. But they have a lot of money coming off the books next year – including $13 million they’re still paying Edwin Jackson in 2016. So I think it’s feasible for them to make one more big acquisition. They could even look to unload some salary by trading a player like Travis Wood who projects to make over $6 million in arbitration. As a back-end starter that would be more than reasonable, but as a reliever, it’s a bit expensive. 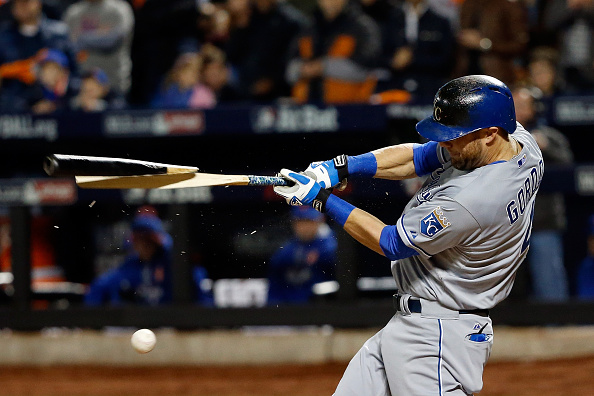 NEW YORK, NY – OCTOBER 31: Alex Gordon #4 of the Kansas City Royals breaks his bat in the second inning against the New York Mets during Game Four of the 2015 World Series at Citi Field on October 31, 2015 in the Flushing neighborhood of the Queens borough of New York City. (Photo by Sean M. Haffey/Getty Images)

So if they want to go after Jason Heyward or Alex Gordon, it’s still a possibility. I pick those two because they’re the best defensive corner outfielders on the market. It’s possible they could provide passable defense in center field. I’m less convinced Yoenis Cespedes could do that. And I know Justin Upton can’t.

Between the two I’m guessing Alex Gordon would come cheaper. He’s a left fielder by trade, whereas Heyward is a right fielder. He has the much stronger throwing arm which could help him make up for any speed or range concerns that arise in center field – if any arise at all. Heyward is also five years younger. Offensively, I’d say it’s a wash.

So if I’m a Cubs fan looking to free agency, I’m hoping they go big for Heyward. He’s said to be looking for a ten year deal, which would usually cause me to pause. But at 26 years old, it’s not the same concern it was when the likes of Albert Pujols and Prince Fielder signed their long deals. It’s hard to say what he’ll end up getting, but I wouldn’t be surprised see something in the ten year, $180-200 million range. Maybe even a bit higher. The crazy thing is, I’m pretty sure he’d be worth every penny.

I mentioned the possibility of trading Travis Wood to clear some payroll space. The remarkable thing about the Cubs team right now is that they’ve created it and still kept pretty much all of their prospects in tow. That means they could have a lot of reinforcements on the way, but it could also mean the have what it takes to swing a trade for a center fielder. At this time, I hesitate to guess which center fielder might be available on the trade market, but if they really want to go this route, they can probably have their choice of available targets with the prospects still in their system.

The Cubs have done so much to improve their team that was already really good. The moves for players like John Lackey and Adam Warren won’t get as much press as the Zobrist acquisition, but after a 97 win season, they’re a better team on paper. If they can add a talent like Jason Heyward, they probably become the favorites in the NL Central, the toughest division in baseball. And hey, it wouldn’t hurt to upset Cardinals fans. Looks like Theo Epstein is well on his way to breaking another historic World Series drought.