It seemed like that the longer Max Scherzer’s free agency dragged on, the more likely it would be that he returned to the Detroit Tigers. Of course, it didn’t happen that way – Scherzer agreed to a staggering seven year, $210 million contract with the Washington Nationals earlier this week. While it might seem a little bit shocking that the Tigers didn’t get involved in the bidding for Scherzer, one glance at their long-term payroll commitments helps explain why they held out.

Consider this – after setting a franchise record with a $163.6 million payroll in 2014, the Tigers already have $164 million committed to 14 players in 2015. Throw in ten league minimum players and roughly $1.5 million for arbitration eligible Al Albuquerque, and you’re looking at a payroll of over $170 million for the 2015 season, a new franchise record.

In 2016, the situation is somehow uglier. The Tigers have just five players signed to guaranteed contracts, and those players will be making a total of $104.8 million. Detroit also begins their $6 million yearly payments to the Rangers for Prince Fielder in 2016, and owns a $10 million club option with a $1 million buyout on Joe Nathan, meaning they’ll be on the hook for at least $111.8 million…with just five players signed. And it’s not as if Detroit isn’t losing any key players – David Price, Yoenis Cespedes, Joakim Soria, Alfredo Simon, and Alex Avila will all be hitting the free agent market after this season. 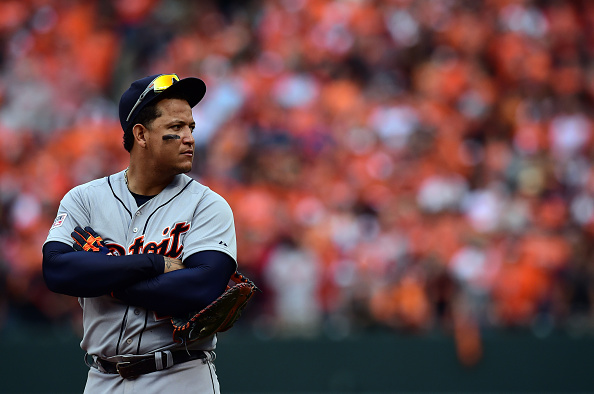 BALTIMORE, MD – OCTOBER 03: Miguel Cabrera #24 of the Detroit Tigers looks on in the eighth inning against the Baltimore Orioles during Game Two of the American League Division Series at Oriole Park at Camden Yards on October 3, 2014 in Baltimore, Maryland. (Photo by Patrick Smith/Getty Images)

The situation is inexplicably just as bad down the road in 2017. The same five players (Justin Verlander, Miguel Cabrera, Anibal Sanchez, Ian Kinsler, and Victor Martinez) are all still signed, and are owed $101.8 million. Add in the $6 million heading to Texas, and that total is upped to $107.8 million. In 2018, the Tigers will pay Verlander, Cabrera, and Martinez $76 million. Sanchez and Kinsler have $5 million buyouts on club options. Texas is still getting $6 million. Put it all in a blender, and you’re looking at a minimum of $92 million for three roster spots. If the options on Sanchez and Kinsler are picked up, the Tigers will still have five roster spots occupied…at a cost of a cool $108 million. And it’s not like the Tigers have much of a young core that will be rolling into arbitration around that time – you’re looking at Nick Castellanos, Anthony Gose, Jose Iglesias, and Shane Greene, along with several prospects that haven’t made much of an impact in the majors yet.

Needless to say, the 2015 season will be an important one for the Tigers. If they fail to win the World Series this year, they’ll be heading into next winter needing to replace a pair of starting pitchers, two outfielders, a backstop, and one (or most likely, two) of their key relievers. And with all due respect to players like Steven Moya and James McCann, they’re not Yoenis Cespedes and Alex Avila. It’s not easy to fill holes in significant spots like that internally when you have a weak farm system. 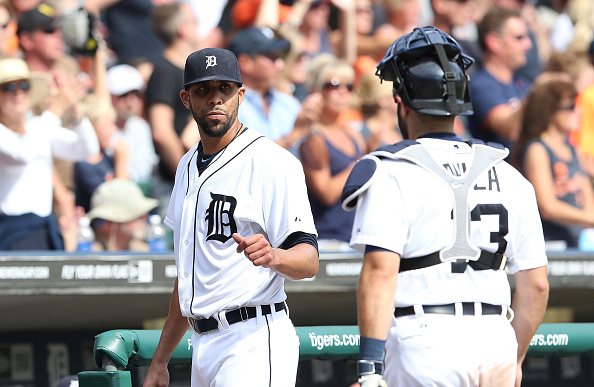 DETROIT, MI – SEPTEMBER 28: Pitcher David Price #14 of the Detroit Tigers looks into catcher Alex Avila #13 after the final out of the sixth inning during the game against the Minnesota Twins at Comerica Park on September 28, 2014 in Detroit, Michigan. (Photo by Leon Halip/Getty Images)

Could Detroit simply just do what they’ve done in the past and throw money at the holes? Sure. They could re-sign David Price for seven years and $170 million. They could re-sign Avila for something like three years and $30 million (assuming he doesn’t have another down year in 2015). They could dump $70 million into Yoenis Cespedes or nine figures into either Jason Heyward or Justin Upton. But wouldn’t that just kick the can down the road even more? Reloading with veterans is a strategy that hasn’t really worked out all that well for clubs like the Yankees (and the Phillies to a lesser extent), bogged down by absurd amounts of money dedicated to a relatively small core of players.

With the Tigers, I think we’re starting to see the major issue with long-term contracts dedicating to keeping franchise icons in town. The franchise is handicapped by the contract extensions given to Verlander and Cabrera, and spending an obscene amount of money on veterans to supplement that core has placed the Tigers in a situation where they desperately need to get younger and start something resembling a rebuild, but they can’t because of the money they’ve earmarked for aging players years down the road.

And at the end of the day, while the Tigers have been very successful overall under Dave Dombrowski, they’ve been a disappointment. 2015 will be the eighth straight year of the Tigers having a payroll over $100 million, and they’ve won a total of one pennant and zero World Series games over that time period. During the 13 years (and counting) in which Dombrowski has been the team’s GM, he’s turned a team that was the laughingstock of the American League into a solid contender. But his Tigers clubs have won just one World Series game since he took over, despite all of the money invested into the team and the numerous honors received by Tigers players.

In 2015, the Tigers need to win the World Series. It’s really that simple. If they don’t, they may never see a better chance at success in October for several years.