The San Diego Padres found out the hard way that winning the offseason world championship doesn’t mean much of anything once April rolls around. The darlings of the winter, San Diego hoped their multitude of personnel moves would result in the team’s first playoff appearance since 2006; instead, barring a miracle they’ll finish under .500 for the fifth straight year. Even with a revamped lineup and rotation, the Padres just couldn’t compete in the NL West.

Preseason Prediction: While this team may not run away with the division, as Los Angeles and San Francisco still represent very real hurdles, this team is a legitimate threat in the National League. The outfield should be a fun one to watch, and the infield should perform better than expected. The rotation should be among the best in the league, with James Shields anchoring the group, and high upside arms in Cashner, Ross, and Ian Kennedy. This team should absolutely be in the mix, and could very likely capture, one of those wild card spots in the NL. From there, they could make noise in a short series, with as high quality a pitching staff as they have. (Randy Holt, March 26th)

What Went Right: Justin Upton had his typical year at the plate even if his numbers were down slightly across the board, and he was everything the Padres hoped he would be when they acquired him in December. Matt Kemp stayed healthy all year and managed his sixth season of hitting 20-plus homers. Yangervis Solarte took the third base job and ran with it, posting 1.8 WAR and potentially giving the Padres one less move to make this offseason.

In the rotation, Tyson Ross took another step forward and posted an impressive stat line. He struck out more than a batter per inning and only allowed 8 home runs in over 180 innings. James Shields was his usual solid self and helped to anchor the top of the rotation. The bullpen was the team’s strength, as Joaquin Benoit and Craig Kimbrel formed one of the better 1-2 punches in the league. The Padres’ staff held opponents to a .248 batting average, good for seventh in the NL. 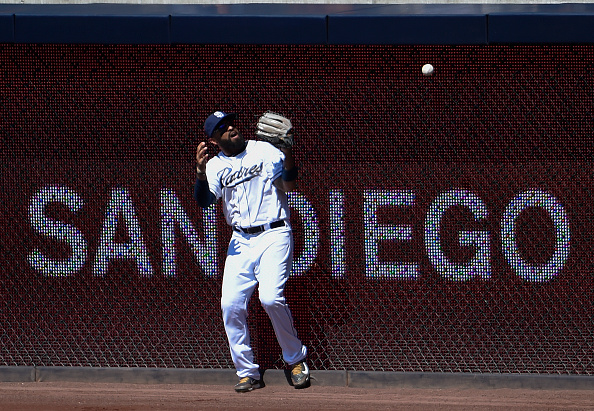 SAN DIEGO, CA – SEPTEMBER 7: Matt Kemp #27 of the San Diego Padres can’t make the catch at the wall on a ball hit by Daniel Descalso #3 of the Colorado Rockies during the thirdinning of a baseball game at Petco Park September 7, 2015 in San Diego, California. Kemp was charged with an error on the play. (Photo by Denis Poroy/Getty Images)

What Went Wrong: The offense was fairly putrid for most of the year, for one. The Padres ranked near the bottom of most team offensive categories in the NL, hitting just .244 with an awful .687 OPS. The middle of their lineup didn’t scare any team smart enough to not let Upton beat them, even with Kemp’s presence. And their run production was severely hampered by injuries to Wil Myers and Yonder Alonso, both of whom missed significant time.

Many of the team’s big offseason acquisitions besides Upton didn’t work out as well as the Padres hoped, either. Kemp was okay at the plate but looked slow and plodding on defense, and is probably better suited to be a DH at this point in his career. Will Middlebrooks barely lasted half a season before the Padres pulled the plug. Derek Norris threw out 34% of runners attempting to steal on him, and while he had his typical year in terms of power, his on-base percentage dropped by over 70 points. Shields was steady, but looked nothing like the top-of-the-rotation ace the Padres were hoping for when they lavished him with a big contract.

At the trade deadline, the Padres stubbornly refused to move any of their valuable pieces; instead, they insisted they could still contend in the NL West and didn’t want to break up the team. Now hopelessly out of the race and facing a tough offseason ahead, they’re probably wishing they’d brought back a few young, controllable players over the summer. 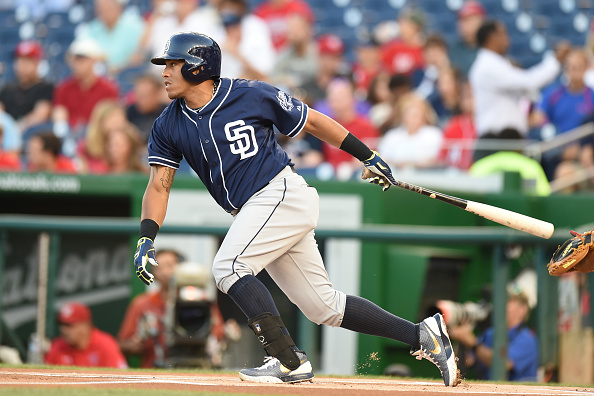 WASHINGTON, DC – AUGUST 26: Yangervis Solarte #26 of the San Diego Padres leads off the game with a single in the first inning during a baseball game against the Washington Nationals at Nationals Park on August 26, 2015 in Washington, DC. (Photo by Mitchell Layton/Getty Images)

Most Surprising Player: Solarte was ticketed for a utility role early on, but the realization that Middlebrooks wasn’t the answer at third base prompted the Padres to move the 28-year-old into the starting lineup. He posted a .272/.324/.427 line as a starter and gave the Padres some stability at the hot corner. Affordable and not eligible for arbitration until 2017, Solarte will likely enter next spring as the Padres’ starting third baseman. His emergence gives GM AJ Preller one less position to fill this winter. 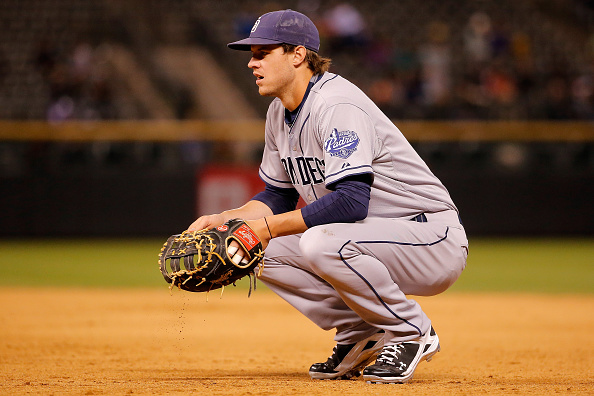 DENVER, CO – SEPTEMBER 18: First baseman Wil Myers #4 of the San Diego Padres looks on during a break in the action against the Colorado Rockies at Coors Field on September 18, 2015 in Denver, Colorado. The Rockies defeated the Padres 7-4. (Photo by Doug Pensinger/Getty Images)

Most Disappointing Player: Myers is loaded with talent and has the potential to be a cornerstone player, but he’s missed significant time over the past two seasons with injuries. The Padres were counting on him heavily this year and their offense suffered when he went down. Not yet 25 and with his third organization, Myers needs to live up to the hype next year if the Padres have any hope of contending. Injuries are an unfortunate part of the game, but the Padres simply need more from Myers. His 2015 season can’t be seen as anything less than a disappointment. 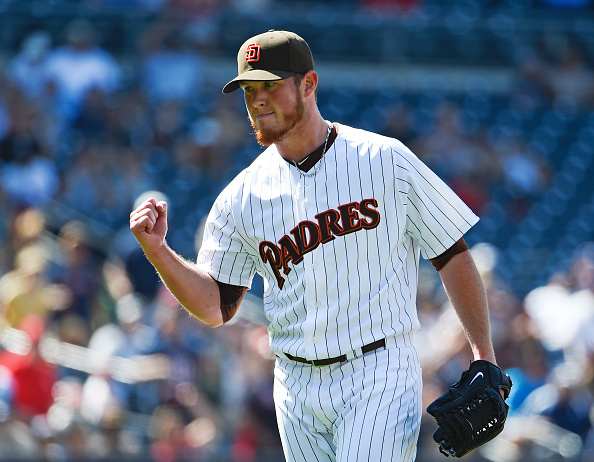 SAN DIEGO, CA – AUGUST 19: Craig Kimbrel #46 of the San Diego Padres pumps his fist after a 3-2 win over the Atlanta Braves in a baseball game at Petco Park August 19, 2015 in San Diego, California. (Photo by Denis Poroy/Getty Images)

The Future: The Padres face an offseason of uncertainty after their incredibly busy winter a year ago. Justin Upton is set to hit the free agent market and will likely be too pricey to bring back. They may try to come to a long-term agreement with Ross and buy out his remaining arbitration years. There could be as many as three spots to fill in the rotation, and with big money still owed to Kemp, Shields, Kimbrel, and Melvin Upton, there may not be a lot of dollars to go around. Their middle infield could use an upgrade, as well as their bench. They may try hard to find takers for Shields, Kemp, and Kimbrel (while eating money with the first two) and fill holes that way while also freeing up money to explore free agency.

The Padres may end up being just as busy if not busier this winter as they were in 2014, but this time the narrative will be much different.